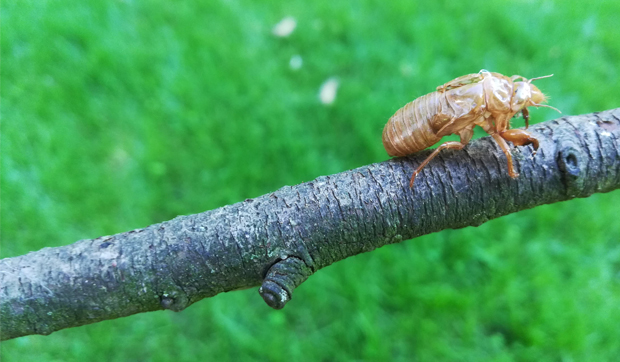 Photo Caption: This cast skin, the exoskeleton of a periodical cicada nymph, provided the clue that solved the puzzle of the mysterious burrows in a Wheaton lawn.

Good Natured readers might recall how last week we talked of how jigsaw puzzles were all the rage during the Covid quarantine, and how satisfying it is to fit the pieces of those puzzles together. We then embarked on a quest to solve a nature puzzle: Several mysterious burrows had appeared in my mom’s Wheaton backyard following the 9+ inches of rain we received over the month of May. But what, or who, had made them?

Burrowing crayfish seemed likely suspects, save for the fact that the holes were smaller in diameter -about the size of a nickel-than the holes our local burrowing crayfish tend to create. Also, the habitat wasn’t quite right for crayfish. My mom lives in a landlocked neighborhood, and though her and her neighbor’s yards had standing water, the area just didn’t seem quite right for devil crayfish, Cambarus diogenes, or prairie crayfish, Procambarus gracilis, our area’s most common burrowing species.

The pieces of the puzzle just weren’t coming together.

I was beginning to lose hope that the picture of what was going on there would ever become clear. Then one day, by sheer luck, I stumbled on a post in the Facebook group Insects and Spiders of Illinois. The post writer asked a question about cicadas. But not our annual cicadas, which typically start pitching their buzzy woo in late June or early July. No, the person referenced the periodical cicada, Magicicada spp.

You might remember the hype around the last major emergence of these fascinating insects, which spend 17 years underground slurping nourishment from tree roots. In 2007, towns to the east–where development occurred gradually with a fair amount of trees preserved–had trees dripping with cicadas. But here in Kane County, we had next to none.

That group of cicadas is known to entomologists as Brood XIII, and is next due to appear in 2024. But in northeastern Illinois we have a brood of 17-year cicadas that, in 1969, fell out of sync with the rest of its Brood XIII brethren and sistren. This year, 2020, four years off from the rest of the clan, periodical cicadas are emerging in a broad swath around the Chicago region…including DuPage County.

Hmmm. This bit of information was most interesting. Wheaton is DuPage’s county seat. Could subterranean cicada nymphs, feeding on tree roots since 2003, be the piece that would complete this backyard puzzle? Even more puzzling, how could their living in my parent’s backyard have escaped my notice?

The brood before then was 1969-the year the insects got off kilter. It was a historic year in many ways, but for 7-year-old me the main events were the Apollo 11 moon landing, the Mets beating the Cubs to win the National League pennant, and the fact that my new baby brother upturned my status as The Only Child. I do not remember cicadas that year in the slightest.

But getting back to present day, I needed to find some hard evidence if cicadas were going to be the missing piece to the backyard puzzle. Back at Mom’s, ostensibly for yardwork, I put off starting the lawnmower and had a good look around the backyard. This time though I bypassed the holes in the ground, in favor of focusing on the trees. I wanted to see if I could find any cicada shells-the cast skins cicada nymphs leave behind when they shed one final time.

I looked on the trunks of the crabapple tree, the magnolia, the dogwood and the spruce. Nothing. I checked the fence posts. Nope. The siding of the wooden shed, and the step leading up to it? Nada.

That left just one tree to go.

I headed for the hemlock, which is near the house and abuts the brick patio. It was the farthest tree from the burrows and, I thought, the least likely place for a cicada to be. I started looking low on the tree, gradually adjusting my gaze farther and farther up. Then, at around 8 ft., I saw it, hanging from a broken branch by the wren box: a perfect, intact Magicicada shell.

I dragged one of the wrought-iron patio chairs over to the tree, climbed up and carefully plucked down the branch with the beautiful golden shell.  I tell you, it was made of chitin-the tough, fibrous material that makes up exoskeletons-but it might as well have been 24 kt gold. I’d find the missing piece, and the backyard puzzle was complete.

The story, however, wasn’t quite over. What this subset of Magicicada Brood XIII really needed was for our weather to dry out and warm up-and it certainly has! Since finding that first Magicicada shell, I’ve returned to Mom’s yard a couple more times. With the help of my niece and nephew and their young, sharp eyes, we’ve found over three dozen periodical cicada shells, and heard the droning calls of the insects themselves up high in the trees. And then last week, as I was eating an early supper on my deck, I heard it: Magicicada calls. In St. Charles! I’ve since heard them in Geneva and Batavia, and you know what that means…

Next week we’ll take a Good Natured look at the periodical cicada. We’ll explore their life and times both below ground and above, and place special emphasis on these Brood XIII stragglers-a group that’s a puzzle in and of themselves.