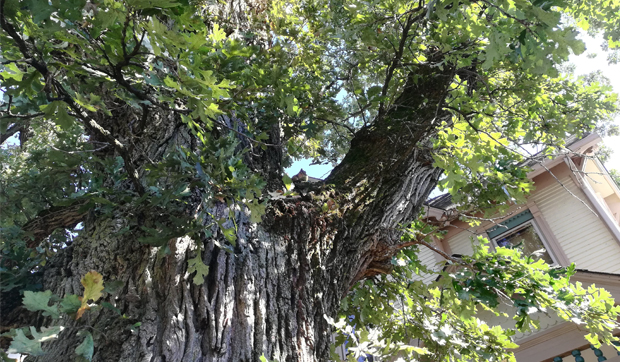 Photo Caption:A phenomenal bur oak tree complete with a tiny chipmunk—can you see it?—are one small part of the diverse nature that can be found in downtown St. Charles.

Some of you have noticed, and a few have even called to comment on the fact that my role at the St. Charles Park District has changed. After almost 12 years as manager of nature programs and interpretive services, I’m now the district’s outreach ambassador. I’ll still be producing this weekly nature commentary; I’ll still be traveling around giving nature presentations; and I’ll still be teaching nature classes. But I won’t be doing from my old home base at the Hickory Knolls Discovery Center.

Nope, these days my office—which I’ve taken to calling the embassy, in a Good Natured sort of way—is upstairs in a building called the Baker Annex. If you’re familiar with St. Charles, you might be able to picture it. It’s the cool old house just west of the Baker Community Center on Walnut Street.

Yep, right smack in the midst of downtown.

I’ll admit, this decidedly more urban setting is a lot different than the relative quiet out at Hickory. For one thing, the sounds of trucks, motorcycles and sirens are frequent, and really echo off the buildings here. The view out my windows is different too. Can you say Moss-Norris Funeral Home?

But the big question everyone’s been asking—and one you might be thinking right now—is, don’t I miss being out in nature?

You know what? I don’t. Because even here, a block south of Main Street/Route 64 and a half block west of Second Street/Route 31, nature is all around.

Take right now, for instance. The sun has recently set, and I have my fantastic 100-year-old double-hung window (complete with vintage wavy glass and counterweights) propped open. I can hear crickets and katydids chirping, and common nighthawks sending their nasal calls out into the cool evening air.

Earlier today, I was serenaded by chimney swifts, chattering as they swooped after insects. A chipmunk, too, was chirping up a storm—so much so, that I had to head down porch and see what the ruckus was all about. From what I could piece together, a territory skirmish was taking place in and around the phenomenal bur oak tree by the front porch. The larger chippy won that particular battle, but I think the war will continue.

Last night the excitement included a skunk ambling along the sidewalk and then crossing Walnut. I say excitement because never, in all my years of admiring skunks, have I ever seen one with such a long, flowing tail. Usually skunks hold their tails up, kinda like a plume that droops over at the top. But this one stretched out almost flat and appeared to be dragging. Why? Did Stinky sustain an injury of some sort? I’ll try to look closer—though not too close—next time.

Something else I need to check out, sooner rather than later, is the bat population in downtown STC. At Hickory Knolls, the most bats we’ve ever seen at one time is three. But I have a hunch that the combination of older buildings, street lights and river bugs makes this locale pretty good habitat for big brown bats. They’re a fairly common species and, being colonial as opposed to solitary, would be the sort to take up residence behind shutters, under eaves and inside attics—the sorts of places that are plentiful in neighborhoods but not really present in natural areas.

If you happen to see someone walking erratically, after dark, around Second and Walnut, holding what looks like a pocket-sized transistor radio, pausing frequently and possibly muttering, please don’t call the cops. Though the behavior might appear suspicious, it’ll just be me and my Listen Up Bat Detector, scanning the airwaves for the high-frequency sounds bats make while they’re hunting for food.

Finally, for the last month or so—really, since I moved in here—I’ve been watching the ebb and flow of the spider metropolis along the railing by the back door. Now, yes, we do have spiders at Hickory Knolls, but with a few exceptions they are mainly sight hunters like jumpers and wolf spiders. But here at the embassy, I’d estimate there are representatives of at least five different spider families, ranging from the orderly orbweavers to the somewhat messier cobweb, sheetweb and mesh web weavers to the over-achieving funnel web weavers, whose thick films of silk end in a distinct tunnel.

The attraction, of course, is the outside lights, which draw in all sorts of insects. With food so easy to come by, the spiders can’t help but move in and take advantage. I’ve seen drama as moths and beetles struggle against the snaring webs and spiders fight to subdue them; I’ve seen turnover, too, as bigger spiders disappear (still need to figure that one out) and smaller ones move in to take their place.

We’ve even had a bit of romance.

After observing that all the spiders along the railing were female (as they’re the gifted webspinners) I was a surprised/not surprised to one day find a good-sized male orbweaver swaggering along toward his humble bachelor pad. Er, web. Which happens to be two balusters over from a female orbweaver whose impressive web spans a good two feet.

I’ve yet to see him approach her, but am adding him to my list to Things to Observe here at the downtown office. Where nature abounds.