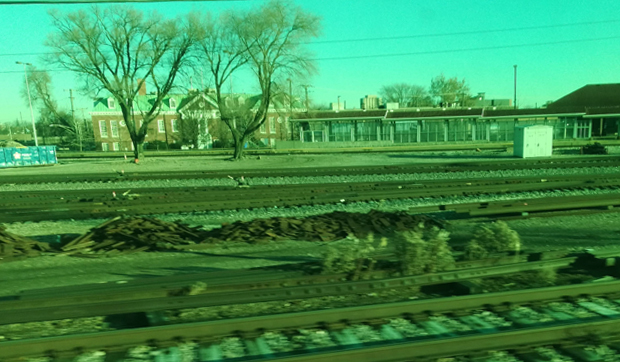 Photo Caption: : Don’t blink or you’ll miss it! Nature passes quickly when you’re riding a train. Those blurry clumps are asters and goldenrods, holding on amid a harsh environment of rail ties, steel and rock.

Good Natured: Nature on a Train!

Nature on a train.

I know, it sounds like an oxymoron. Or maybe the title of a toned-down Samuel L. Jackson movie. But it’s also an apt description of last week’s work adventure.

Alas, my little expedition didn’t involve Amtrak’s Empire Builder or Southwest Chief, or even the Illini, which I rode a fair number of times during the college years. Nope, this train escapade was three days commuting to and from Chicago on Metra’s Union Pacific West line.

At first it might not seem adventurous or expedition-like, especially when you break the commute down to its basic parts: walking to the train, sitting, riding, walking a bit more. I didn’t track any grizzlies or mountain lions, and thanks to a warm coat with an abundance of snacks in the pockets I didn’t risk hypothermia or starvation.

But when you add in details like setting the alarm for 4:45am; leaving the house just as the sun is coming up; and making sure I didn’t forget anything important (like my ticket or coffee), the simple commute became a monumental effort for this non-morning person. Nonetheless, as the time and miles passed by, I made discoveries that would have made Lewis and Clark envious.

Well maybe not Lewis and Clark. But Ernie and Bert? For sure.

Now I’ll admit, the first day was pretty much a bust. The early hour combined with a brisk 2-mile hike rendered me pretty much speechless-a fact that was proven when a neighbor walked over to say hello. To his simple question of “Hey, what’s new?” I could only muster a few squeaks and a weird sound that what supposed to be “Not much, how about you?” but was more of a “Uhhhnmbleh.”

By Day 2 I started to get the hang of commuting by rail, and by Day 3 I achieved a personal milestone of speaking a complete sentence before 7:30am. (For the record, it was a “Thank you” to the conductor. And since the “I” is implied, it is indeed complete.)

My first nature revelation occurred as we whisked past West Chicago Prairie, which lies just east of Kress Road. Looking at this neat preserve, which is part of the Forest Preserve District of DuPage County, I recalled that it encompasses a former stockyard. Livestock on their way from points west to points east could, briefly, exchange the aromatic atmosphere of a cattle car for that of stock pens amid prairie.

It’s hard to tell from the train, but West Chicago Prairie is one of the most biologically diverse sites in the region. It has something like 600 different species of plants on its 350-ish acres. While most are native, some were introduced by the cattle during those stockyard days.

I was musing about herds of cattle as we pulled into the West Chicago station, where herds of people boarded, headed for points east. Hmm.

We skipped Winfield, then stopped at Wheaton, my hometown; bypassed College Avenue then headed for Glen Ellyn. As we pulled away from that stop we passed Churchill Woods Forest Preserve, which sits along the East Branch of the DuPage River. My dad’s side of the family used to hold reunions there every Father’s Day and I remember spending countless hours trying to scoop baby bullheads from the water with a paper cup.

The preserve has come a long way since those days in the 1960s and ’70s. The water is a lot cleaner, and the prairie and woods are undergoing restoration. Some of the oaks there date back to the 1830s, when the Churchill family settled in the area. I thought about Winslow Churchill, the patriarch, as the train rattled past and then crossed over I-355. Winslow supposedly was not fond of the traffic that used to clatter along the plank roads that were built as Glen Ellyn and other towns were founded. I can only imagine what he’d think of the noise today.

As we rolled along toward Elmhurst, I decided to play a little game of Name That Tree. Scrubby stands of eastern red cedar and sumac grew along the north side of the tracks and provided shelter for several small flocks of birds. As the train rumbled by they flew away, which led to a brief round of Name That Bird. Lots of LBJs (birder-speak for Little Brown Jobs, likely sparrows of some sort) but also dark-eyed juncos, which graciously flash their white outer tail feathers when they fly away and make identification easy.

I also noticed a lot of young maples, probably Norways. Even though the train was moving at a fast clip, maples are pretty easy to ID. Their branches grow opposite one another; most other trees in the area have branches that alternate. (The acronym MAD Horse Buck can help you remember that maples, ashes, most dogwoods, horse chestnuts and buckeyes are the opposite-branching trees in our area.)

Just past Elmhurst is the old Elmhurst Quarry, which provided millions of tons of dolomitic limestone before it was shut down in the early 1990s and converted to a flood-control facility. The fragments that were produced during the quarry’s heyday were used for roadbeds and railbeds-including the stone that forms the Metra tracks.

From Elmhurst into Chicago the landscape began to feature more introduced species, especially teasel, with its spiny but attractive seed heads; phragmites, the giant reeds with fluffy seed heads; and giant foxtail, the bristly seedheads of which are dangerous to dogs and cattle but also provide food for rodents and birds.

I had to admire the toughness of these plants that many folks consider weeds. Their roots held them in place amid a habitat that was mostly rocks, wooden ties and steel rails.

As the train pulled into the inky blackness of the Ogilvie Transportation Center, I made a plan to continue viewing Nature on a Train on the ride home. But even making a run for it and grabbing the 4:11 didn’t afford enough daylight to see much past about Oak Park. Nature would have to wait for another day.

On the upside, the setting sun let me indulge in another favorite activity. Be sure to read Good Natured next week when we’ll begin the first of the six-part epic series, Napping on a Train.