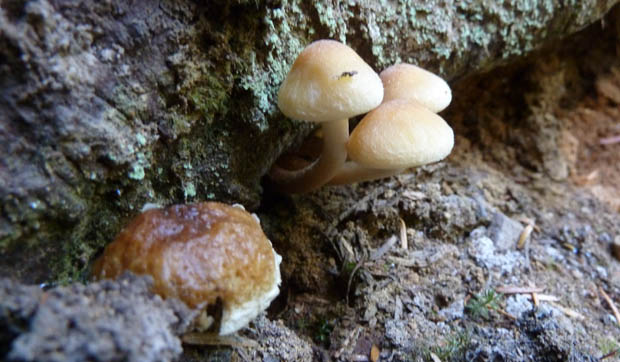 Photo Caption: Fungi, referred to as mushrooms by most of us, as well as a host of other decomposers, make good use of nature’s ‘leftovers.’

If you’ve ever hosted a holiday feast, you know that leftovers are part of the deal.

Some go gracefully, packed up in containers and sent home with family or friends. Others take on new identities inside inventive casseroles. A select few might, with the best of intentions, get tossed in the freezer for “later,” a day that may or may not ever come.

But no matter how hard we try, most of us will still end up with scraps that we have no choice but to toss: Bones. Moldy rolls. That weird Jell-o concoction with the cabbage and…ham…?

You can reduce, recycle and compost all you want, but at the end of the day you’re still going to have some items that end up as waste.

Here’s a sobering fact: It’s estimated that, worldwide, 1.3 billion tons of food go to waste each year. That’s about one-third of the planet’s total food production destined for trash cans, Dumpsters and landfills.

If only we could be as efficient in our domestic environment as Mother Nature is in hers.

If you’re outside, be it in a yard, park or forest preserve, take a look around. Those leaves that fell a couple months ago? They’re breaking down, albeit slowly, and all the good things that helped them function as food factories for their respective trees are being returned to the soil, nourishing surface organisms and creating a nutrient-rich environment in which future seeds will grow.

Those fungi growing on downed logs? They’re some of the most powerful recyclers around.

The “mushrooms” we’re familiar with are the most visible parts of these organisms. Often fleshy and sometimes quite colorful, these growths produce the spores that ensure we’ll have more fungus in the future.

But below the surface lie the real workhorses-the hyphae, or thin filaments, that grow beneath. Collectively called mycelium, these thin threads penetrate surfaces beneath the mushroom and secrete digestive enzymes. Even the strong wood of a mighty oak is no match for these microscopic processes as, after death, its cellular structures break down bit by bit and return to the ground.

Arthropods too contribute to this process, although not so much now as in warmer-weather months. Creatures ranging from teensy mites to thick-as-your-thumb beetle grubs grind, chew and excrete, reusing plant matter and concentrating nutrients for use by subsequent levels in the food chain. It’s recycling at its finest, and nature’s way of making sure those “leftovers” on the forest floor don’t stick around forever.

Then there are those remnants that are animal in nature.

Regular readers of this space may remember an incident from a few years back wherein two white-tailed bucks-handsome and quite large-met their end on a November night when their antlers irreversibly locked together in a St. Charles woodland.

Coyotes were the first of the clean-up crew to respond, taking advantage of what amounted to about 600 pounds of fresh venison. My park district coworkers and I helped too, harvesting the skulls and antlers that, I kid you not, weighed at least 50 pounds.

Subsequent visits to that park showed just how quickly the scraps from such a large feast can disappear. Eight days after the initial find, two picked-clean vertebral columns and some assorted ribs were all that remained. A month later even these bones had been reduced, and most showed signs of having been nibbled and gnawed. Such bones (and antlers, had they still been there) are a vital source of calcium for squirrels, mice and other rodents-animals which, more often than not, then pass those nutrients along to foxes, owls and other carnivores.

By spring, only a few fragments remained and those disappeared quickly in the ensuing months.

We humans might not ever be this efficient in our meal planning and preparation, but we can sure try. One good tip is to sit down, right now, with pen and paper (or laptop or tablet) and start making plans for next year’s holiday meals. Make notes on the quantities you served; the items you had too much of; and which recipes-despite the hype they received in the magazine or web page–proved less than popular with your guests.

As a matter of fact, I think I’m going to do that right now. Well, actually, in a few minutes. First I have to finish this last piece of layer cake. Topped off with one, final scoop of ice cream. And a not-too-stale Christmas cookie that I’m sure will be just fine, so long as I dunk it…