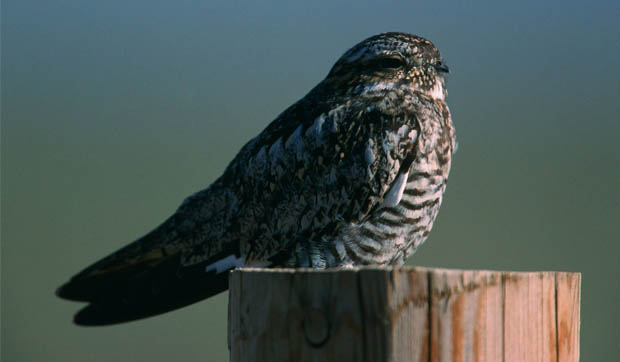 Photo Caption: A common sight in the evening sky, nighthawks are rarely seen in daytime. Their mouths appear small but can gape widely to capture insects, which make up 100% of this helpful bird’s diet. (Photo credit: Gary Kramer/USFWS)

I’ll be the first to admit, I’m not very good at texting.

Half the time I don’t realize I’ve even gotten a text. And when I do, my fat fingers mis-hit the ridiculously tiny keys. (Apologies to my friend Jennifer, who received an emoji of a camel instead of a hug.) Then, more often than not, I fail to hit Send, and the message goes nowhere.

But on those rare occasions when everything comes together, I not only receive the text but successfully respond and we all learn something in the process. Take the other night, for instance.

I was at home watching a Cubs game when I found a text message from my friend Amber–right after she sent it! Even better, her question was quite timely, in a Good Natured sort of way. The exchange went something like this…

Me: Ooh! Fork-tailed flycatcher? (My heart skipped a beat as I typed, as these are South American birds that rarely show up in Illinois. One made a brief but memorable appearance a few years ago at Gunnar Anderson Forest Preserve in Geneva but since then nada.)

Amber: I’ll Google it! All were silhouetted so I couldn’t get any colors.

Me, the next morning: Common nighthawk? Size is about right, just not sure about forked tail.

Amber: That is the best guess so far. The size is right on. Let me Google that call.

Amber, again after just a few minutes: THAT’S IT! Right on. Couldn’t see the wing bars due to silhouettes. Thank you!!!

What Amber witnessed that night was a sight near and dear to my heart-that of nighthawks foraging for insects on a warm summer night. The nighthawk was the fourth bird I learned to identify as a young naturalist, coming in right after robin, cardinal and blue jay. I clearly remember my dad pointing them out one summer evening in 1969 as they soared above the playground at my Wheaton grade school.

That night, and countless times since, I’ve had the advantage of a clear view and proper lighting-something Amber lacked-and will stand mesmerized as these active birds swoop above me in pursuit of bugs.

The white wing bars are their most prominent field mark, but another giveaway in identifying Chordeiles minor is the vocalization to which Amber referred. Described as a nasal “Peent!” in field guides, the sound often is likened to that of male woodcocks but occurs much later in the year.

As conspicuous as these birds can be from a distance, very few people know what they look like up close. Their coloration is for the most part a cryptic brownish-gray-all the better to stay camouflaged with during daytime. But check out this week’s photo. Go ahead, I dare you. See if you can look at that face and not go, “Awww!”

Even people not into birds have been known to admit, nighthawks are just darn cute. For one thing, they’re somewhat plump-which comes as a surprise, given their agility in the air. Also, as members of the Caprimulgidae, or Goatsucker, family, they have large, winsome eyes that they tend to squint in daylight. The resulting effect is that of a distinguished baby, youthful yet Yoda-like all at once.

The nighthawk’s mouth, by the way, looks deceptively small in pictures. In real life it can gape widely, functioning like a big net to capture flying insects, which make up 100% of this helpful bird’s diet.

The gaping mouth also is responsible for the bird’s odd family name, Goatsucker. At one time, back before people realized birds don’t drink milk, it was thought that this avian group used their large mouths to grab onto goat teats and…well, you get the picture.

Depending on who you talk to, the nighthawk’s common name also can be a bit of a misnomer. Nighthawks are considered by some experts to be crepuscular, or most active at dawn and dusk, as opposed to nocturnal, active primarily at night.

Even so, due to the profuse night-time light in our area, nighthawks frequently can be seen well after dark, foraging for insects above our downtown areas, parking lots and along the river-as was the one Amber saw.

If you enjoy spending summer nights outdoors, put nighthawks on your list of things to watch. They’ll be around for a while yet before embarking on their fall migration, a journey that may take them as far as northern Argentina.

Listen for the Peent! and look for the white wing bars, then sit back and enjoy their amazing aerial maneuvers. I’ll bet you’ll soon become a fan of these fascinating birds…especially if you’re a night, um, owl like Amber and I.