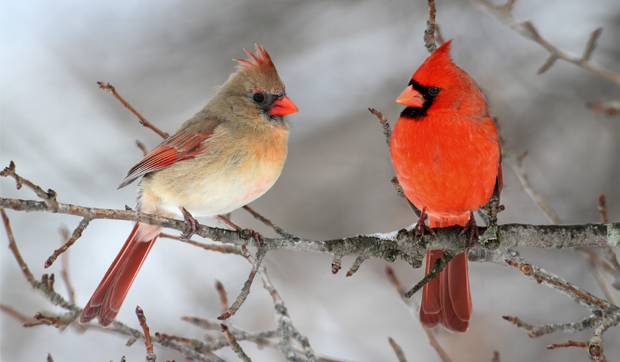 Cardinals get their names-both common and scientific-from the males’ bright red plumage, which is similar in color to the vestments of Catholic cardinals. Females and immature birds are brownish but can be differentiated by their bills. Young birds have dark bills while mature females’ are reddish orange.

During a recent review of Good Natured topics, I realized that over the years we’ve discussed a lot of local songbirds. And I do mean a LOT! Chickadees, blue jays, barn swallows, catbirds, grackles, juncos, song sparrows and robins all got to be headliners this past year, and the list grows longer the farther back we dig. Rose-breasted grosbeaks, scarlet tanagers, fox sparrows, hermit thrushes…you get the picture.

But as I looked over the inventory of names, one in particular jumped out. It wasn’t a bird that had generated a lot of correspondence, nor was it one that had appeared in numerous columns. In fact, it hadn’t appeared at all, other than to serve as a comparison with other species.

I couldn’t believe that we’ve never, in 14 years, taken a Good Natured look at the species that is among the first children learn to identify; is unmistakably identifiable; and, for heaven’s sake, is the state bird of Illinois: the northern cardinal.

I’m not exactly sure how this oversight occurred, but I do know that now is the time to make things right for this most regal of backyard birds. Cardinalis cardinalis, this one’s for you.

These delightful birds have been a part of my life for as long as I can remember. My grandparents (and Illinois State University) called them redbirds, and my childhood neighbor Grandma Merrick taught me about their enchanting behaviors. To this day I think about her own enchanting ritual of, every night, without fail, walking out to the birdfeeder on our shared fence with a Hill’s Bros. coffee can of sunflower seeds. “Cardinals like to have one last bite before bed,” she told me and, sure enough, the birds would come-every night, without fail.

They apparently like a drink before bed, too, as I often see first Mr. Cardinal, then Mrs. fly in for one last sip from my deck-mounted birdbath just as dusk settles in.

Cardinals are not only easy-to-see creatures of habit, but also are possessed of many other fine attributes that make them likeable–even among people who, for whatever reason, don’t like birds. I remember talking with a visitor during my days working at Red Oak Nature Center in North Aurora. She had stated that birds were noisy and dirty and that she couldn’t care less about identifying them…except for cardinals. “Cardinals appear when angels are near,” she stated with confidence. I couldn’t disagree.

(In fact, I had my own cardinals-appearing incident several years later. The day after my father’s funeral, I’d called my mom to see how she was doing. As we were talking, a brilliant crimson cardinal flew into a bush in my front yard. “Guess what, Mom?” I said. “Dad just sent a cardinal here to let us know everything’s okay.” The words were barely out of my mouth when a second cardinal, a female, landed right next to him. “Not only is he okay,” I noted, “but he’s already got a girlfriend!” Mom chuckled at the thought and added, “Well she’s got good taste…and he didn’t waste any time!”)

Ethereal connections aside, cardinals brighten our days during all four seasons. They breed here during spring and summer, often raising two and sometimes three broods before the weather starts to cool. In fall the male’s bright plumage competes with foliage of blazing yellow, orange and red but then takes center stage when the trees and shrubs go to sleep for winter.

Yet year-round cardinals weren’t always a thing here in northern Illinois. After the last Ice Age, which ended around 12,000 years ago, our landscape offered little that was to the species’ liking.

This is a bird that prefers brushy, forest-edge habitat where trees are small and/or widely spaced…basically what our suburban neighborhoods offer. As Arthur Cleveland Bent, author of the 21-volume Life Histories of North American Birds, explains in his chronicle of the northern cardinal, the species was not common north of the Ohio River Valley as late as the 1880s. But by 1895, as people moved west and cities grew, the bird had expanded its range to the Great Lakes, and by the 1930s it was common throughout the Upper Mississippi region and was continuing its move north, and west.

Hard to believe, isn’t it? So often when humans move into an area, the changes we bring drive wildlife away. But a decent number of species (besides cardinals, robins come to mind, along with our Big Three mammals–opossums, raccoons and skunks) adapt very well.

Which is great news for us cardinal fans. Just the other day, as the thermometer struggled to climb above zero, I was walking to work and listening to the songs of, you got it, northern cardinals. I saw and heard only males singing “What-cheer, what-cheer!” and “Birdy, birdy, birdy!” But as we get into February the females will join in too as the birds progress through their courtship rituals.

Those of you with birdfeeders, keep an eye out in spring for males offering females seeds-an act thought to demonstrate his ability to be a good provider, but also one that provides the female with the energy she’ll need for the next stages of family life: site selection and nestbuilding (mostly her, although the male might offer a twig or two in support); egg laying (all her); incubation (again, mostly her); and care and feeding of young (both parents).

Ah, but these activities are still a few months away. In the meantime, let’s keep A.C. Bent’s words in mind:

“There is no more pleasing, soul-warming sight than one of these bright red birds enlivening with color the somber woods or leafless shrubbery when the ground is covered with snow and the world seems lifeless. And, perhaps on a sunny winter morning, he may cheer us with a few notes of his flutelike song.”