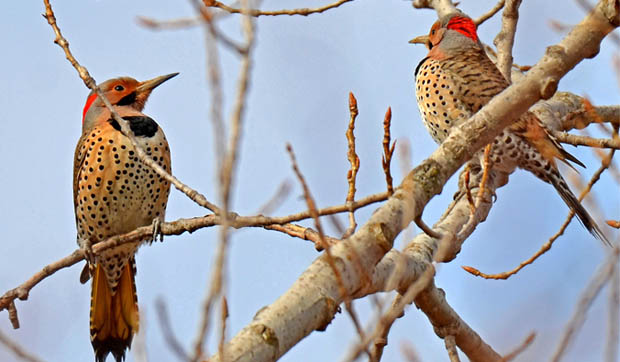 Photo Caption: Although they are members of the woodpecker family, northern flickers differ from their cousins in various ways. Flickers prefer to forage on the ground and, as shown here, often perch instead of clinging to the sides of trees. They also have some of the longest tongues in bird-dom.

They’re not particularly large and majestic like, say, a bald eagle. Nor are they teensy and colorful, like hummingbirds. They’re not present in large numbers, nor are they endangered. So why do they get to be this week’s star?

Their Good Natured story starts with a skull.

A little over a week ago, a Hickory Knolls visitor casually mentioned that he thought he saw a bird’s head lying by his car. My ears perked up and my heart skipped, just a little. A bird’s head! My, what else might be out there?

As I walked the man to his car I already was picturing a Cooper’s hawk kill site, with feathers and assorted other parts strewn about. But nope. It was, as described, just a head. The nearly naked skull of a medium-sized bird. One, I might add, with a disproportionately large bill.

Dark in color, the result of thin skin aging over time, the disembodied cranium looked a bit curious sitting there all by itself. Adding to the mystery, it was covered in mud. An animal must have dug it up and dropped it there on the asphalt quite recently.

I picked it up carefully, waved goodbye to the visitors and scurried inside. What prize was hidden in the muck?! I went straight to the utility sink and started rinsing.

Within moments a tiny shock of red feathers appeared, then disappeared down the drain. Rats. I turned the water down and rinsed some more.

It was as I was gently drying our newfound treasure that I saw them: Two distinct structures, narrow as cat whiskers, extending from the base of the skull all the way over the top, then down the front and disappearing into the left nostril.

Hot diggity! For the first time ever I was viewing, in real life and not as an anatomical drawing, the legendary hyoid apparatus of a woodpecker.

Most higher vertebrates have some sort of hyoid assembly, but it varies greatly between animal orders. In humans, for instance, it is a U-shaped bone in the throat, between the lower jaw and the voice box. It helps anchor our tongues, which consist primarily of muscle.

In birds, though, the hyoid is a Y-shaped assemblage of bones and cartilage that supports the tongue nearly to the tip. In some species, like chickens, the two arms, or horns, that branch off the base of the Y are relatively short. But in woodpeckers, they are much longer. And in flickers, they reach record-breaking proportions.

The lengthy hyoid, the now-absent wisp of red, a slight downward curve on the bill…all these clues added up. I was holding the skull of Colaptes auratus, the northern flicker.

Although members of the woodpecker family, northern flickers are just a little different from their cousins in that they tend to forage more on the ground rather than under the bark of trees. They have a particular fondness for ants, and use that long hyoid apparatus to thrust their tongues, spear-like, into ant mounds to gather not just crunchy adults but also soft, juicy larvae.

It is estimated that northern flickers can extend their tongues more than two inches beyond the tip of their bill. If humans were similarly equipped, we’d be sticking our tongues out a good foot in front of our faces! Maybe it’s best that our hyoid bones are small.

In our area northern flickers were once known as yellow-shafted flickers, due to the golden hue of the shafts of the wing feathers. Out west, where the wing feathers are reddish, the birds were known as red-shafted flickers. But eventually it was discovered that the two “species” could interbreed and produce fertile offspring, so the two were lumped together as C. auratus and given different subspecies names.

Either way, I’ve always had a fondness for these handsome birds.

One evening last fall as I was leaving work, I was excited to see a group of six flickers in the trees that border the south side of the Discovery Center. They seemed to be taking turns getting a drink from the spring-fed creek that runs alongside the parking lot. One by one they flew down, then back up to the trees, each time flashing the white patch of feathers on the rump that makes for a very distinctive field mark.

I’m still not sure whether they were a family group, as I’d seen flickers on and off throughout the summer in roughly that vicinity, or whether they were a small flock migrating south. (Unlike the other resident woodpeckers in our area, most flickers are short-distance migrants and head for slightly warmer climes in winter.)

And now, in light of the discovery of the muddy skull, I have to wonder… Did one of those birds meet its fate there by that creek? And who, or what, dredged up the carcass, and deposited the head on the driveway?

Wherever it came from, the skull will remain a permanent part of the Hickory Knolls artifact collection. Many people will learn about the hyoid apparatus, thanks to the sacrifice of that one individual-a northern flicker that did indeed make headlines.