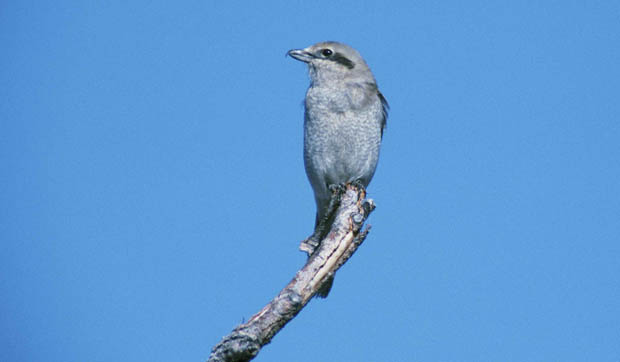 Photo Caption: The northern shrike, an unusual predatory songbird, makes occasional winter visits to Kane County. Among its many fine qualities is the unusual trait of impaling prey on thorns and barbed wire.

Citizens of Kane, beware: The butcher birds are back!

That’s right folks-Lanius excubitor has returned to our fair land. But instead of running for cover, you might instead want to gear up and go outside. Grab your binoculars and maybe a camera with a big lens, and head to a nearby natural area to try and catch a glimpse of this occasional visitor from the north.

L. excubitor is the scientific name for the northern shrike, a bird virtually in a class by itself. Along with its cousins in the family Laniidae, it’s classified as a predatory songbird-a “Tweety with a ‘tude,” if you will. Though its voice is marginally musical, its talent for taking prey is exceptional. Yet you’d never tell by looking at it.

Unlike most of the true birds of prey, such as hawks and owls, northern shrikes are small, about the size of a chunky robin. They also have thin, spindly feet, designed for perching, instead of the powerful toes and razor-sharp talons possessed by raptors.

About the only clue to the shrike’s predatory nature is its bill, which has a distinct hook on the end. It is this feature, coupled with strong neck muscles, that make the shrike so good at what it does. With an efficient snip to the base of the skull, shrikes dispatch their prey (typically small rodents and birds in winter) in short order.

But now what? This small bird can’t gulp its prey down whole, like an owl does. And those weak feet make gripping and shredding difficult, so eating like a hawk is tough too.

That’s where a unique adaptation-and the reason for that nickname “butcher bird”-comes into play. Shrikes will impale their prey on branches, thorns, even barbed wire, much like a butcher hangs his wares. The bird then does one of two things. If it’s hungry, it sets about the task of tearing into its meal. (Remember that scientific name, Lanius? It comes from the Old Latin lacnius and means “to tear or rend.”) If the bird is full, the prey is left hanging, perhaps for a short while, perhaps for good.

Scientists have lots of theories on why shrikes sometimes kill more than they can eat. It could be that the impaled prey animals are simply larders, a go-to stash for when times are lean. Impaled prey might also serve to indicate territories; show females which males will be the best providers; and/or help prey “age” and become easier to eat. No one really knows for sure, and it could be the habit serves all of these purposes.

One thing is certain-if you want to see a northern shrike, and you don’t want to travel to their summer breeding grounds in Alaska and northern Canada, now is the time. With a little luck, you just might see one of these handsome hunters.

I was just that fortunate last week. The Happy Hikers, Hickory Knolls’ walking group, had gathered for our weekly foray into the natural area behind the nature center. A northern shrike had been spotted near Bobolink Field, most recently the day before on Kane County Audubon’s New Year’s Day Bird walk, and Hiker Hewlett Prucher was determined to find it again and share the sighting with our group.

Truth be told, the northern shrike could’ve come and gone and I’d have been none the wiser. I was focused on the shrubby field to the west and also more than a little concerned about stepping in one of the ruts that mar an otherwise fine trail. But Hewlett kept scanning with her binoculars and had the good sense to look east, to a solitary tree rising above an expansive, grassy hunting territory.

There at the top of the tree, perched on a twig and silhouetted against the morning sun, was a bird that looked a little too plump to be a mourning dove (a bird we would expect to see posed like that at this time of year). Sure enough, when Hewlett trained her binocs on the bird, she confirmed it as a shrike; even better, she made sure the rest of us got good, up-close looks of this unusual and quirky creature. What a great way to start the new year!

Wanna see a shrike for yourself? Besides Hickory Knolls, the birds also have been spotted at Fermilab in Batavia, as well as McKee Marsh at Blackwell Forest Preserve in Warrenville.

If you go out shrike-seeking, look for the same identifying marks Hewlett saw:  a grayish bird with black wings and tail, as well as a black mask across the eyes. It likely will be bobbing its tail as it perches at the end of a branch, post or wire, keeping close watch on its turf.

Okay, time for one more round of Latin. The species name, excubitor, means sentinel or watchman. Bonam fortunam, er, good luck in your quest!