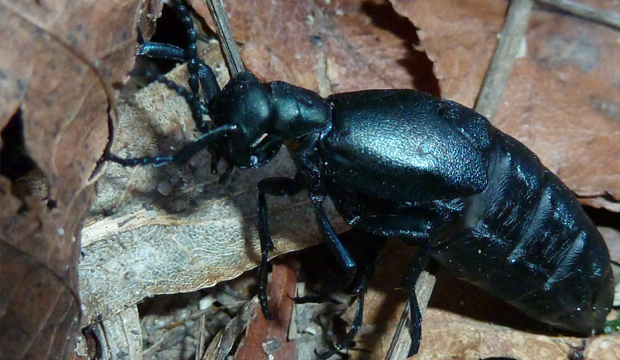 On a walk a few short weeks ago, in the Hickory Knolls Natural Area, something big happened: I struck oil.

Well, to be more specific, the “strike” was actually more of a “stroke.” And even though the experience was tremendously rewarding, I’m not making any plans to retire and live off my riches.

Nope, this oil wasn’t black gold, or Texas tea. It was the oily substance exuded by unique members of the Coleoptera, or beetle order: the Meloe, or oil beetles.

I actually was on a hunt for jack-o-lantern fungus, an amazing type of mushroom that glows in the dark, when I noticed a black insect roughly two-thirds the size of my pinky finger ambling through the same leaves in which I was poking. I recognized the critter as something you’re not supposed to touch, but my poor brain couldn’t come up with the exact name there on the trail.

It was about a half hour later, back in the office, that I figured out exactly what I’d seen. And that’s when the true richness of the discovery became apparent.

Oil beetles are part of a larger family, the Meloidae, or blister beetles. When disturbed, beetles in this family secrete an oily substance that contains cantharidin-a highly toxic chemical that can cause a severe skin reaction, hence the “blister” part of the name.

But that, my friends, is only part of the story. The magnificence of the adult Meloe is surpassed quite mightily by the intricacies of its immature phase.

At this time of year the female Meloe (forgive me for being vague, but the 22 species of oil beetles are quite similar, and it’s tough to tell one from another) deposits eggs that next spring will hatch into a first instar, or stage of development, known as a triungulin.

More mobile than they will be in later stages, these larvae, as a group, clamber up the stalk of a flower or other projection. It’s here that things start to get really interesting.

As an analogy, picture yourself visiting a new city. Upon arrival you need to secure transportation that will get you to your hotel and the meal you know is waiting for you there. Some of you may opt to hail a taxi, while others may decide to take public transportation, hopping on one train and then another. Although they are quite different, both methods ultimately will get you where you need to go.

It’s the same for oil beetle triungulins. Hatching from eggs laid at the base of plants, they need to hitch a ride to the burrows of certain species of solitary ground bees. These secure, subterranean chambers, excavated by female bees for the purpose of raising their own young, will provide both food and shelter for the beetle larvae’s remaining stages of development. Alas, they usually are a considerable distance from where the little beetles find themselves situated. What to do, what to do?

In some Meloe species, the solution is to exert every effort in order to secure a ride. These triungulins rear up and flail their legs-the beetle equivalent of hailing a cab- the moment a ground bee comes near, and clamp down on the hairs of the bee’s body if and when they make contact.

Scientists aren’t exactly sure how the larvae know it’s a ground bee they’re hitching up with-and indeed, sometimes it’s not. But for the most part, perhaps using odor, wing beat frequency and/or behavior cues, the triungulins make the right choice and ride off to a land of milk and honey. Or, more correctly, pollen and nectar.

Other Meloe species, though, opt for mass transit. They begin by forming a clump that is roughly the size and shape of a female ground bee. Their ticket to ride, so to speak , is emitted in the form of a chemical attractant-an alluring concoction very much like the pheromones a female ground bee would give off.

If all goes well, a male ground bee will show up. Let’s refer to him as the A Train. Unable to resist the charms of what he believes to be a potential mate, he lands on the flower, and the baby beetles hop aboard.

Laden with larvae, the hoodwinked male bee continues his quest until he finds an actual female bee. While they’re busy transacting their bee business, the beetle larvae disembark the male and board the female-their B(ee) Train–upon whom they’ll stay until they arrive at their destination: the bee’s underground nest.

I could go on about the amazing complexities of oil beetles-how certain other beetle species “harvest” cantharidin and use it to protect their own eggs from predators; how cantharidin is used to treat warts and also is an ingredient in the infamous aphrodisiac Spanish fly.

But instead I encourage you to do your own research. Whether learning more at the library or online I guarantee, you’ll strike it rich.