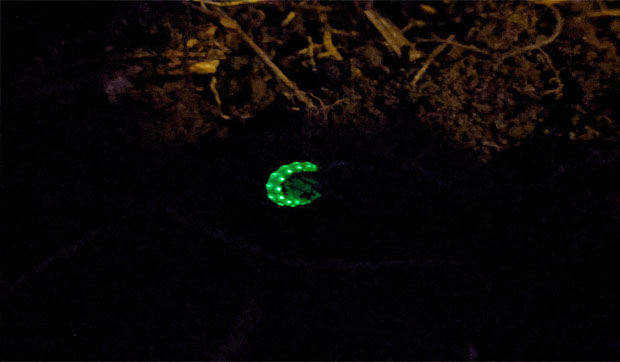 This insect’s genus name, Phengodes, can be traced to the Greek word for light-and with good reason. Phengodes larvae and adult females glow continuously ‘with the brilliancy of a circle of diamonds’ according to one naturalist.

There’s a saying that bad things always happen in threes. But I’ve found, happily, that the same can be said of good things.

Take this past week, for instance. I received an email from my friend Karen. I suppose that’s not a big deal in and of itself, but if you consider its message-that she and her husband Jeff will be traveling through Illinois soon and want to get together-alongside the fact that we’ve known each other since 1968 and haven’t seen each other since 1994, well, that’s not just a good thing. It’s a great thing!

The other two positive notes also involved old friends, but of a decidedly different nature. Not only was I happy to see these two, but I was also relieved I didn’t kill them.

The first encounter occurred as I was doing a little gardening in the front yard. It had gotten quite late and quite dark, which made it tough to see the zinnia seeds I was planting but really easy to spot the bright glow of my old pal Phengodes, the glowworm beetle.

Now you might be thinking you know Phengodes too, and maybe you do. But their common name of glowworm beetle makes them sound like something they’re not. Rather than a type of firefly, or lightning bug, which are part of the family Lampyridae, Phengodes beetles belong to a completely differently family of glowing beetles known as the Phengodidae.

I first met Phengodes back in 2013, when a member of our ecological restoration team found a female in his yard while, yes, gardening at night. (Naturalists, it seems, are a quirky bunch. Harmless, but quirky.)

The females of this genus are especially interesting because they look like larvae their entire lives. They glow intensely-one 1927 account described them as shining “with the brilliancy of a circle of diamonds”-and attain a size of a little under 2 in. They’re predators that feed on critters like millipedes and feed throughout their lives; males, by contrast, feed only in their juvenile form.

Unlike fireflies, which can control their light and use it to communicate and attract a mate, Phengodes glow continuously and the function of their bioluminescence isn’t well understood. It could be that the light helps them find their prey, or might be that they glow as a warning that they are toxic and/or taste bad-a quality that, as far as I know, has not been verified. (Naturalists are quirky and harmless but not always willing to sample toxic larvae, even in the name of science.)

At any rate, the Phengodes I unearthed this year was a male that was either a late-stage larva or a pupa. He still glowed (mature males do not) but when I shone a light on him I could clearly see his legs, wing pads and bulging eyes though not the crazy-large, feathery antennae they’re also known for.

After snapping several photos, I wished my little buddy well and then carefully covered him up so he could proceed through his next developmental stage. Fingers crossed for more glowworms in the front yard at Casa Otto!

Later that week, not wanting to dig in that area and risk disturbing Li’l Phengodes or any of his relatives, I shifted my attention to the north side of the house. My thought was to move a spade-full of wild ginger from there, where it grows thickly, to a bare spot beneath the cedar trees on the west side. But once again the creatures of the soil caused a change of plan.

I’d kneeled down to take a picture of the ginger’s flower, a dull maroon assemblage hidden beneath the leaves. With its odd odor, it’s not terribly appealing to humans but is irresistible to its pollinators, which are gnats and flies.

I took one photo and then, wanting a better angle, leaned closer…and that’s when I saw it: a Neotibicen (a.k.a. annual cicada) nymph, on its back, clawing at the air. While it hasn’t been as long an interval as Phengodes-or Karen–it’s still been quite a while since I’ve seen a cicada in this stage.

Despite their name, annual cicadas spend multiple years-anywhere from two to five-underground, feeding on tree roots. Like a cake almost finished baking, the nymph I found was just about “done.” Its eyes and wingpads were clearly visible, and its body size matched the shells we’ll soon be finding shed on tree trunks and other vertical surfaces.

Not wanting to interrupt those numerous years of development, I repeated what I did with the Phengodes find-snapped a few pictures, then carefully returned the nymph, and the ginger it was under, into the ground and gently tamped the soil.

So tonight is the night I’ll be getting together with Karen and Jeff in our hometown, the formerly “dry” Wheaton, IL. We plan to raise a glass or two, toasting our 50-some years of friendship and reminiscing our way through old friends and new-classmates, teachers and (shhh, Karen and Jeff don’t know this yet) Phengodes and Neotibicen too. Cheers!