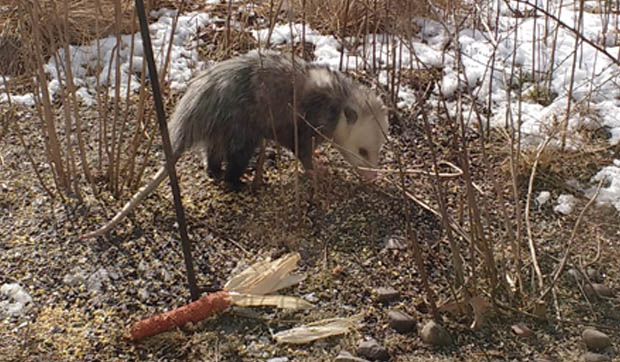 Photo Caption: Remarkable in many respects yet poorly adapted to winter, the Virginia opossum will often forego its nocturnal nature to forage at birdfeeders and other free food sources on all but the coldest of days.

Let’s take a moment, shall we, to add up the many fine qualities of Didelphis virginiana, the remarkable creature most of us know as the Virginia opossum.

Also referred to simply as opossum, or possum, these animals hail from Central and South America and are renowned for their ability to “play possum”–that is, to play dead seemingly at will. Although this reaction to extreme fright isn’t exactly within their control (it’s an involuntary response that produces a coma-like state, complete with lowered heart rate and respiration, and the escape of various bodily fluids) it’s an effective defense against predators. Some animals really do need “the thrill of the chase” in order to stimulate appetite, and still-as-death prey that’s stinky too just doesn’t fill the bill.

Opossums have another, lesser-known defense: Drool. They chew and jaw until saliva drips out of the mouth and even bubbles out the nose. All that goo makes them look sick and unappealing and can cause a predator to bypass the whole dribbly mess.

Then we have a whole other set of physical adaptations that make opossums so unique among North American mammals. Opossums are our only native marsupials and carry their newborns-teensy as a bean and an average of 7 or 8 at a time-around in a pouch. They are expert climbers, aided by a cool opposable toe on each hind foot as well as a weakly prehensile tail. (They can grip light things, like dried leaves, with that tail, and they can use it for balance when climbing, but no matter what you may have heard, they can’t hang by it.)

Opossums have 50 teeth, more than any other mammal on the continent, and aren’t afraid to show them in a defensive snarl. They may bite when threatened, but the teeth mainly are used to consume an extremely varied diet consisting of carrion and rodents, insects, plant matter and of course all the leftovers humans leave behind, including cat food and dog food.

These animals also have one of the smallest brain-to-body mass ratios, but that factor hasn’t held them back. Remember, they originated far south of the border, but since the Pleistocene have expanded their range as far north as southern Maine and Michigan’s Upper Peninsula.

While humans helped with that expansion when we cleared the thick forests 100+ years ago, opossums’ large range also can be attributed to their extreme adaptability. They’re not fussy eaters; they’re as comfortable under a deck or shed as they are in a secluded woodland nook; and they can adjust the sex ratios of their offspring in response to various environmental conditions to maximize survival. How cool is that?

Lately, opossums have gotten another PR bump: They’re said to eat ticks. Lots and lots of ticks-as many as many as 5,000 in a season, according to the Cary Institute for Ecosystem Studies in Millbrook, NY.

I have to admit I’m a wee bit skeptical of this last attribute, as it sounds like the sort of statistic that comes out of a laboratory. (Not unlike that often-quoted figure that bats can eat 1,000 mosquitoes in an hour. I can eat a dozen White Castle sliders at a sitting, but do I do that every day? Not a chance.) Anyway, yes, the opossum’s fondness for ticks was discovered in a lab, where test subjects were caged and exposed to ticks.

Would they eat them at the same rate in the wild? That would depend on relative tick abundance. But opossums definitely consume those ticks they come across, often through grooming. And that’s a good thing!

All these features notwithstanding, opossums do have one area in which they are sorely lacking. They are not well adapted to cold weather.

It’s that latter trait that forces them out in the winter to look for food, even when chubbier neighbors like raccoons and skunks are holed up and waiting for milder weather. As the cold drags on opossums will even forego their nocturnal nature and come out in the daytime, since temperatures might be just slightly warmer then.

In the past few weeks we’ve seen a lot of our local opossums as they forage amid fallen birdseed and around open trash cans. They’re also up in trees grabbing frozen crabapples and other assorted fruit on all but the coldest days.

Next time you see an opossum, take a moment to assess its overall appearance. Are the ears small and ragged? Chances are they’ve been frostbitten. What about the tail? It is also vulnerable to cold, and can start to look stumpy over time.

These are the sorts of signs you can use to get a sense of the opossum’s general age. The more wear, the older the animal. But even the most tattered individuals aren’t likely to be more than a couple years old. Opossums aren’t much for longevity and a two- or three-year-old individual is ancient indeed.