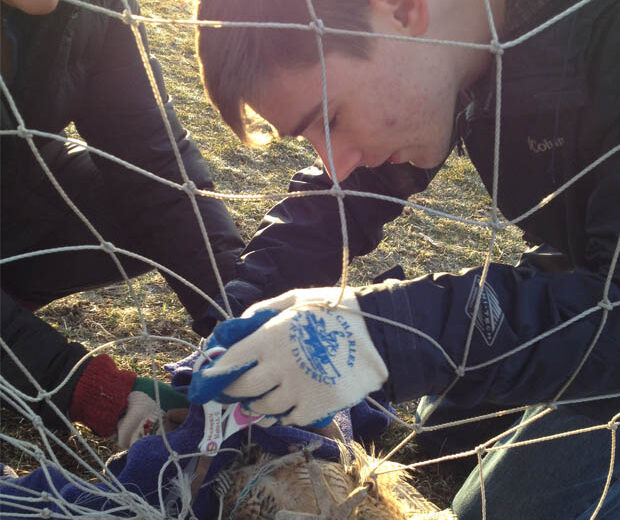 Excitement on the Soccer Field

I’ll be the first to admit, soccer has not played a big part in my life. I remember playing in a few awkward games in junior high gym class, and I may have attended a game or two in high school, but that’s pretty much it.

The fact that every day I drive past the broad expanse of soccer fields at James O. Breen Park in St. Charles hasn’t really improved my lack of interest in the sport. But I’ll tell you what–after what happened there recently, I’m definitely going to start paying more attention.

Maybe not so much to the sport itself, but definitely to the goals that dot the playing fields. And, specifically, the netting in those goals. As it turns out, they catch a lot more than soccer balls.

This story starts casually enough. Amy Luppino had taken her two dogs, Lucky and Rufus, to James O. Breen for an early morning romp. The sun was shining, the air was brisk, and all was right with the world. Well, almost right.

The boys, both wirehaired pointing griffons, were sniffing along when, suddenly, they switched from laid-back fun mode to full-on hunting form. They’d caught a scent! Body stiff, head and neck extended, tail out; clearly they’d found a bird. But what kind? The habitat, if you can call it that, was soccer field turf grass. Not exactly the sort of setting where you’d expect to find game birds.

Caught off guard by her dogs’ behavior, Amy was even more surprised when she saw what they were pointing at: a great horned owl, thoroughly ensnared in the netting of a soccer goal.

Enter Roberta Samson and her dog Maggie, and their offer to help. Amy stayed with the owl while Roberta and Maggie sped over to Hickory Knolls, where they found Tyson Jenkins, one of our hard-working front desk associates. Thanks to an early-morning rental, Tyson had the building open but was in between tasks when Roberta ran in. Thinking fast, he grabbed scissors, gloves and a towel and headed out to the scene.

As he later described it, Tyson found the owl “pretty tangled up and gasping.” The strands of soccer net had wound around the owl’s neck and it was slowly suffocating.

With Amy and Roberta close by, Tyson knelt down and went to work. Probing delicately with the scissors, he found the netting amid the bird’s thick feathers and carefully snipped it away. The bird’s head and neck were freed!

However, this “Yippee!” sort of moment was quickly followed by a “Yow!” as in “Youch!” The return of oxygen to its system brought renewed vigor to the great horned–a species that also goes by the nickname Tiger of the Sky–and it lashed out, firmly grasping Tyson’s gloved thumb in its talons.

(I suppose this is as good a time as any to mention that great horned owls possess tremendous grip force. I’ve heard it can approach 500 psi when under duress, which this bird certainly was. Bald eagles, by comparison, exert a grip force of around 400 psi and humans, around 20 psi.)

So now the owl was still entangled, and Tyson was bleeding. He went back to the nature center to get a band aid, and told restoration manager Denis Kania what was happening. Denis and Tyson hurried back out to the soccer field and, with a few more clips of the scissors, freed the owl and watched as it took off determinedly for the trees.

We could end the story right there with a “And they all lived happily ever after.” Indeed we could. But I’d like to add one more thought. Well, maybe two. Three at the most, I promise…

It’s estimated that 30% of American households have at least one person who plays soccer. In 2017, there were 126.22 million households in the United States. My math skills aren’t the strongest, but I used those figures to calculate 37.87 million soccer-playing households, which in turn translates to several million soccer goals strewn across the country.

If you, like me, don’t have wirehaired pointing griffons, and if you, also like me, tend to walk or drive past soccer fields without giving them much thought, I’d like to ask you to modify your behavior just slightly. Briefly scan the netting in the goals as you go by, just to make sure no animals are trapped there.

Owls are most prone to getting caught, as they fly in low-light conditions and pursue prey that can live in or near soccer fields. But I’ve heard of foxes, rabbits and deer getting caught in nets too. And just so soccer doesn’t bear all the blame, let’s add volleyball and lacrosse nets too. A few more sets of eyes, like yours and mine, that are out there looking can help get these critters discovered and rescued before it’s too late.

Oh, and in case you’re wondering, Tyson’s thumb is doing fine. He received medical treatment for the wound and endured a fair amount of pain but through it all he smiled and said it was “totally worth it.” I’m sure somewhere near Hickory Knolls there is a great horned owl family that totally agrees.