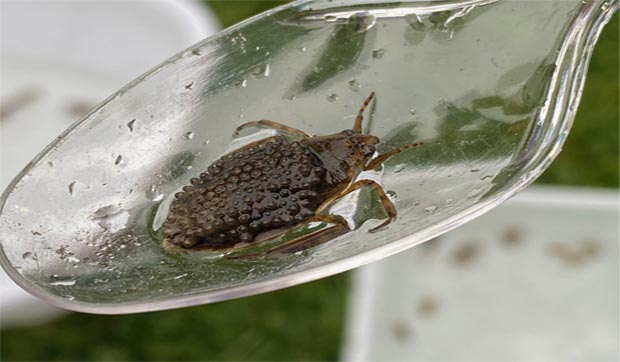 Good Natured: Papa’s Back Is Home to 100 Wee Ones

Father’s Day is almost here, and you know what that means… Time to celebrate all those local animal dads whose continual hands-on parenting style makes them candidates for Father of the Year!

Well it seems as though our area’s male wildlife, while great at siring broods and litters, defending the territory in which they grow, and maybe even providing some meals for mama and/or the wee ones, aren’t really the sort of over-the-top fathers portrayed on Animal Planet. None of them get pregnant like male seahorses, nor do any incubate an egg on their feet in -40F cold-for over nine weeks!– the way emperor penguin papas do.

What we do have, though, is an insect genus that ranks a close third to those TV Mr. Moms. At just under an inch in length they’re not terribly large, and you have to poke around in a marsh or pond to find them. But if you do, you’ll be bowled over by the parenting practices of the male Belostoma, or giant water bugs.

We encountered a few of these role-reversal rock stars a few weeks ago during a field trip with our adult learners, the Kane County Certified Naturalists. Dipping nets in a pond yielded all sorts of aquatic treasures: dragonfly nymphs; water boatmen; backswimmers; and several Belostoma, including one bearing eggs on his back.
There they were, roughly 100 future toe-biters (did I mention that’s one of this predaceous bug’s nicknames?) stuck tight with a waterproof “glue” made just for this purpose by none other than Mrs. Giant Water Bug. We might well have captured her too, in a different net, but there was no way to tell. Because once her ovipositing duties are complete, it’s hasta la vista babies; all care after that is provided solely by the male.

You might be thinking, “Well, gee, how much does he really have to do?” It’s true, at this point the offspring are still within their eggs, so they don’t need to be fed. But still, the developing descendants-all 100 of them-need constant tending.

Over the course of a day, Daddy Water Bug needs to regularly expose the eggs to atmospheric air (despite their name, water bugs do not have gills) while also ensuring that they don’t dry out. When below the water’s surface he strokes his back frequently, using his rear legs like wipers on a windshield to keep the eggs free of sediment and parasites.

Having 100 eggs on one’s back is bound to have an effect on mobility, and for giant water bugs this burden comes at a high price. Encumbered males swim slower, have less success at foraging and, worst of all, get eaten more frequently than their unencumbered counterparts, both male and female.

But still, this breeding behavior works well; we are definitely not lacking for Belostoma in any of the still-water ecosystems in our area. In fact, their relative abundance has made them prime subjects for scientists investigating paternal care species.

You know what’s interesting though? Early entomologists thought it was the females that did all the work.

In the mid-1860s, scientists intrigued by the insects with the glued-on eggs proposed that the females had a “long, protrusile ovipositor” that they would extend over their backs to put the eggs in place.

This thinking held until 1899, when female entomologist Florence Wells Slater observed that the custodial parent was indeed male. But in accordance with the times, she presumed he did not take the job willingly. In a misinterpretation of the males’ egg-brooding behavior, she wrote, “That the male chafes under the burden is unmistakable; in fact my suspicions as to the sex of the egg-carrier were first aroused by watching one in an aquarium, which was trying to free itself from its load of eggs, an exhibition of a lack of maternal interest not expected in a female carrying her own eggs.”

Following an intense incident by an unidentified aggressor, Ms. Slater noted that the male “meekly received the blows, seemingly preferring death to the indignity of carrying and caring for the eggs.”

Indignant or not, male Belostoma carry and care for their eggs for anywhere from one to two weeks, at which time their little nymphs eclose, or emerge from their eggs, looking much like miniature versions of dear old Dad–and Mom, wherever she may be.

Meanwhile, provided he’s still viable (giant water bugs have a lifespan of about six months) Dad re-enters the dating game. As a male Belastoma, it’s his lot in life to ensure that pretty much every day is Father’s Day.