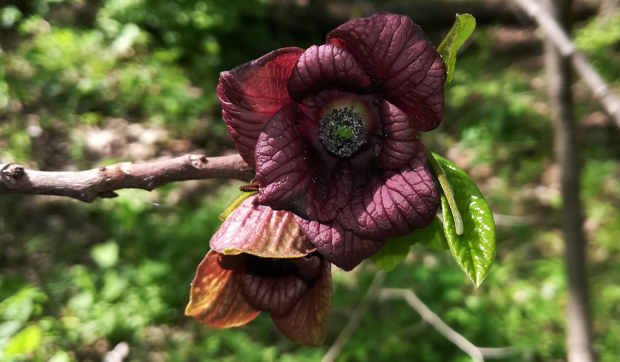 So last week visited a place I’ve heard about my entire life, but had never actually seen-at least not in Illinois. It wasn’t the Mountain that she’ll be coming ’round, nor was it the Dell the farmer is in. It wasn’t even the treacherous Hill made famous by Jack and Jill.

Nope, last week I went way down yonder, to a Pawpaw Patch. And it was awesome!

The actual destination for my friends and I was Richard Young Forest Preserve in Yorkville, and the actual reasons for heading there were the spring ephemerals-those wonderful woodland wildflowers that come and go before the trees fully leaf out. But the little grove of Asimina triloba  was an enchanting addition to our afternoon’s agenda.

Still technically spring, it was a little too early for picking up pawpaws and putting ’em in our pockets. Plus, we were in a forest preserve, and removing items is prohibited. But I did take quite a few pictures of the spindly–in an appealing way–understory trees and their deep maroon blooms.

Hanging like bells from the thin branches, these flowers had a most intriguing structure: three inner petals, three outer petals, three sepals. The number, color and shape had me thinking of what would happen if the flower of a prairie trillium (Trillium recurvatum, also known as wake robin and bloody nose) crossed with that of wild ginger, Asarum canadense.

Tucked inside the deeply hued petals were the flower’s reproductive parts. Whitish stamens surrounded green ovaries. In fact, the stamens had already started to release their pollen, and the tiny light-colored granules speckled the deep red petals in much the same way powdered sugar speckles my dark shirts after a donut or three.

Then there was the smell. It was, vaguely, icky. I’ll admit, my sniffer isn’t as keen as most, but even I could tell that this plant wasn’t trying to attract the sort of insects we think of when we picture pollinators. Bumblebees and butterflies (except for zebra swallowtails, which are the only butterfly that dares deposit eggs on the pawpaw’s toxic leaves) flutter by this plant as they seek plants that offer more palatable nectar and pollen.

Pawpaw flowers instead appeal to the more nontraditional pollinators like beetles and flies-groups of insects some sources describe as “unenthusiastic” and “unreliable” in their approach to moving pollen betwixt blooms. But the pollination picture is even more problematic than a crew of apathetic and inefficient propagators.

Most pawpaw flowers are what botanists call perfect. That is, they contain both male and female parts. But what sounds like a “perfect” solution to the pollination puzzle is actually a real bamboozler. The part that receives the pollen, known as the stigma, becomes unreceptive as the male parts, or anthers, release their tiny grains. So the pollen from one bloom needs to make its way to another one nearby, a process that is easier said than done. Remember, the flowers are bell like and hang upside down, and the preferred pollinators aren’t very dependable.

So it is that pawpaws don’t tend to bear a ton of fruit. Well, at least not initially. As the colony, or “patch,” grows, often through root suckering, the number of fetid flowers increases too, producing a scent even the laziest of blow flies can’t resist.

A relative of the papaya, pawpaws are quite delicious if you can find them. The ripe fruit has a delicately sweet flavor and soft texture, sort of like a mushy banana or custard. They’re pretty big too, shaped like a mango and measuring 4 or so inches long; they’re a great size for snacking but not so good for putting in your pockets.

Indeed, pawpaws are a rare treat, and not only because the tree is uncommon. Any human who wants to sample their delightful sweetness is going to have to compete with a host of local fauna that find the flavor irresistible. Raccoons, opossums, skunks, foxes, squirrels and deer all feed on the ripe fruit, and have for millennia.

It could they picked up the habit where the mastodons left off. Pawpaws are one of a pocketful of fruits thought to be ecological anachronisms, that is, plants that continue to survive long after the animals that dispersed their seeds went extinct. (Other anachronisms in our area include honey locust, Kentucky coffee tree, osage orange and persimmon. If you’re as fascinated by this concept as I am, you might want to check out the 2002 book The Ghosts Of Evolution: Nonsensical Fruit, Missing Partners, and Other Ecological Anachronisms by Connie Barlow.)

Summer is nearly upon us, and as the season progresses I’m hoping to plan more trips down yonder, in search of pawpaws in state parks, where foraging is allowed. I’ll pick ’em up and put ’em in my pockets or, more likely, a backpack, and hope like heck I don’t become The Old Lady Who Swallowed a Fly.