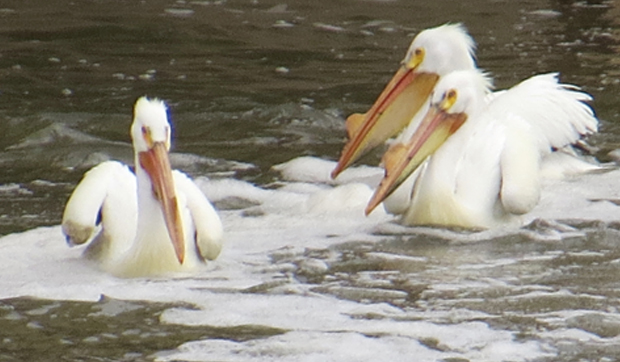 Photo Caption: American white pelicans sporting breeding plumes and nuptial tubercles-those bumps on their bills-rest on a local waterway during their spring migration toward the Great Plains.

I can remember the date like it was yesterday.

It was April 1, 2000-something. I’m gonna guess maybe 2001. It was late in the day, and I was sitting at the front desk at Red Oak Nature Center in North Aurora, my outdoor education alma mater. I’d like to say I was working at the computer, researching a program topic or answering emails. But to be perfectly honest, I’m not even sure we had a computer at that time. I may have just been sitting there, waiting for the phone to ring.

Late afternoons at nature centers tend to be pretty quiet, so when the phone did ring I remember I jumped just a little bit. But that adrenalin bump was nothing compared to the rush I was about to feel.

The caller, a member of Kane County Audubon, wanted us to know that American white pelicans had landed at Nelson Lake Marsh (now known as Dick Young Forest Preserve) in Batavia.

Now, I may have been new to the field of nature education, but I was no fool. Or so I thought. Pelicans? In Illinois?? No way! These were the thoughts going through my head as I listened to the details… “Large flock”… “spotted that morning”… “trouble taking off due to strong winds”…

I made these and other notes on a piece of scratch paper as the caller urged me to get out and see them before they were gone. My heart raced at the thought of seeing such an exotic bird in such a familiar locale. But then, as I hung up the phone, I happened to glance at the large desk calendar that served as our reservation system. I’d completely forgotten it was April Fool’s Day!

Needless to say, I felt a little sheepish as I gathered my things and prepared to head home. “Pelicans!” I thought as I put my coffee mug in my lunch bag. “In Illinois!!” I mused as I locked up the building and headed toward my car. “How could I have been so gullible?” I chided myself as I drove home.

My self punishment, however, turned out to be short lived. The very next day-April 2, the date I’ve come to think of as Not a Fool’s Day, a friend said she’d heard that there were pelicans-pelicans!-at Nelson Lake, and that we should go see them.

That afternoon, as we walked from the preserve’s parking lot toward the open water, I could see the large, white forms of what looked to be several dozen white pelicans, bobbing amid the waves on what was yet another windy day. We watched them through our binoculars, watched other people watching them through their binoculars, and even enjoyed some up-close views thanks to a kindly birder with a spotting scope.

Later that night, I set about learning all I could about these magnificent birds that, until then, I’d associated only with winter vacations in Florida.

As it turns out, white pelicans leave their Gulf Coast haunts in early spring, and travel in a northwesterly route toward their breeding grounds–the wetlands of the northern Great Plains in the U.S. and Canada. These big birds (average weight is almost 15 lbs., which is a lot for a bird, and wingspan is 9 ft.) feed primarily on fish, which they scoop up with their large, pouched bills, and often work cooperatively to “herd” the fish into schools to make gathering easier.

Once caught, the fish slide down the gullet immediately as the bird tips its head back. Contrary to what cartoons depict, white pelicans don’t store food in their bills, nor do they fly with a bill-ful of fish. They do, however, use their pouches to feed their young, inviting the offspring to dive into a gaping maw full of soupy fish. M’m! M’m! Good!

We’d noticed that many of the birds had curious lumps on the tops of their bills. These, I learned, were fibrous bumps that appear as the courtship and mating season nears. They’re called nuptial tubercles, and both males and females grow them, then lose them once breeding is over.

In the time since that first early-spring sighting, I’ve discovered that American white pelicans are in the midst of a population boom. Their numbers have increased more than tenfold since the mid-1900s, which helps account for the increased sightings we’re seeing in this area. Besides Nelson Lake, the birds sometimes visit Lake Prestbury, in the subdivision of the same name in Sugar Grove; Carson Slough, also in Sugar Grove; and also various points along the Fox River. Traveling farther afield, I’ve seen them along the Illinois River at Starved Rock State Park in Utica, as well as the Rock River in downtown Oregon, IL.

As I write this, we’ve yet to see our first pelicans of 2020. But I’m confident they’ll be here soon. I encourage you to head out to any of these destinations and have a look around. These stunning white birds, all decked out in breeding plumage and nuptial tubercles, is a sight you won’t want to miss. No foolin’!