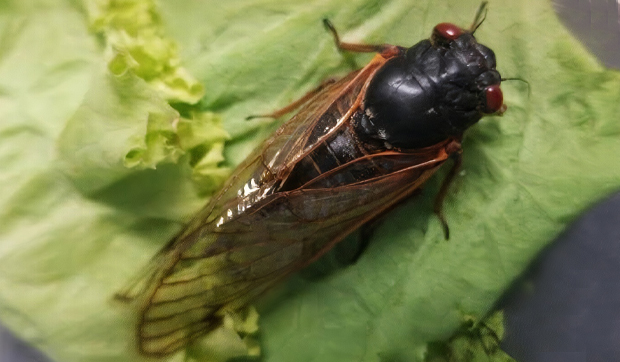 Red eyes, a black body and orange wing veins-and a 17-year life cycle-differentiate the periodical cicada from its larger cousins the annual cicadas.

I don’t know if you’ve noticed, but the air these days has a distinct buzz about it.

Here we are, gradually emerging from our collective months of quarantine and people, like the Munchkins after Dorothy landed in Oz, are coming out to experience our new normal. The streets have traffic again, the restaurants – those that survived – have diners, and shops have customers.

But while we may have waited three long months for our businesses to come back to life, the buzz I’m most excited about was 17 years in the making.

That’s right, I’m talking about the buzz-and whirrs and clicks-of the periodical cicadas.

Granted, we’re not being bombarded like our neighboring counties to the east and southeast, and way up north in Lake County. But I’ve heard scattered calls and found the exuvia, or crispy shed shells, of a number of individuals throughout St. Charles, Geneva and Batavia. And that makes me really happy.

Periodical cicadas are one of those natural phenomena that grabs the imagination. Seventeen years ago-the year Sammy Sosa got kicked out of a game for using a corked bat, and the movie Finding Nemo debuted-the insects we’re seeing and hearing today were smaller than grains of rice. Born of parents who dated back to 1986, these six-legged phenoms drilled their way down through the soil and latched their piercing-and-sucking mouthparts (picture the straw on a juice box) onto a tree root and began feeding. Every couple of years they’d molt, or shed, their hard outer covering, then grow some more.

Finally, this year, probably in early May, their internal alarm clocks started to jingle. One by one, they began to tunnel their way up to the surface. Under the cover of darkness they’d emerge from the soil, scrabble their way over to some vertical surface-a tree trunk, a fencepost, the stem of a plant-and split their skin one more time. Freed from that constraining covering, their wings would fill with fluid and the mad dash to create the next generation would begin.

You see, even though they live for 17 years below ground, the periodical cicadas’ time up in the trees is extremely limited. Once they come out, two weeks is about all they have left. Fourteen days to find a mate and lay some eggs, all while dodging the probing paws and poking bills of hungry mammals and birds raising broods of their own.

But what makes this year’s periodical cicada emergence even more remarkable is that they’re not really “supposed” to be here at all.

The periodical cicadas that inhabit our area are part of Brood XIII, a group that actually includes two to three different species. Their last scheduled appearance was in 2007; their next is in 2024.

But back in the 1950s and ’60s, a subset of Brood XIII jumped ahead, or accelerated, four years and emerged in 1969, four years before their expected 1973 appearance. Just as no one really knows for sure how the 17-year (or 13-year, if you’re in the south) cycle developed, no one really knows why those ’69 cicadas decided, en masse, to leap forward.

Of course, theories for both phenomena abound. Some research indicates that the periodic behavior may date back to the last Ice Age, when cooling temperatures meant insects took a long time to develop. Another hypothesis looks at predator satiation. When squillions of nutrient-dense, relatively defenseless cicadas crawl up from the ground within a few weeks of each other, the creatures that feed on them will become satiated, and not be able to consume every single individual.

Think of the last time you visited an all-you-can-eat buffet. Was there still food on the steam tables when you left? It’s the same with periodical cicadas in the trees.

Regardless of why they behave the way they do, something went wonky in 1969. Conditions underground may have been crowded, or conditions above ground may have been favorable for faster development. Either way, a large group-known oddly enough as stragglers-emerged after only 13 years, but have remained on a 17-year cycle ever since.

Have you ever really looked at a periodical cicada? They are a sight to behold. With their red eyes, black body and orange wing veins, they look nothing like the annual cicadas that will begin to emerge very soon.

Periodical cicadas also are more svelte than their annual cousins (insects that, oddly enough, live a lot longer than a year and are just as poorly understood as the periodical species). They sound different too.

Cassin’s 17-year cicada, Magicicada cassini, the species I’ve been hearing around the TriCities, sounds like a buzzy motor that’s having trouble starting. After a series of stutters, it buzzes for 2 to 3 seconds before starting its next stutter. The other species coming out right now, Linnaeus’s periodical cicada, M. septendecim, is also known as the pharaoh cicada for the way its call sounds like “PHA-raoh”-an effect that’s quite pronounced when the males chorus together.

Yep, as it the case with so many wildlife songsters, only the males make sound. The females are busy listening, and preparing to deposit eggs using their amazing ovipositor that, I kid you not, works like a SawzAll to cut into the tips of tree branches. After the slits are made and the eggs are laid, the young will hatch, drop to the ground, drill down to a tree root and start the next 17 year cycle.

Time is winding down now for these straggler cicadas-and for those of us who’d like to see and hear them. There’s certainly a buzz here in the TriCities, but if you want to improve your chances head east. My friend Dave, who took this week’s photo, says Butterfield Road was loaded with them between Route 53 and I-355. The Morton Arboretum has them, as do parks in Lombard. Go see what the buzz is all about!