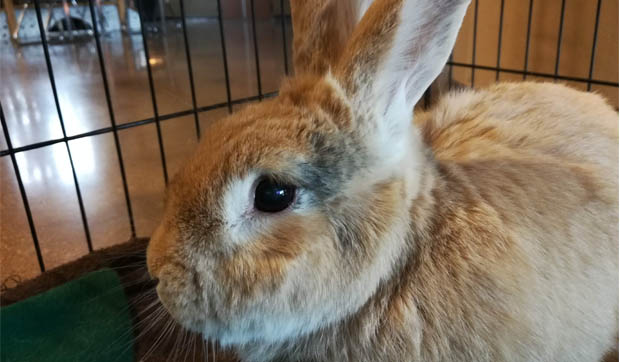 Photo Caption: He’s awfully cute, but Hickory Knolls’ Peter Rabbit is also a lot of work. This year he’s helping spread the word about Make Mine Chocolate, an effort aimed at reducing the number of bunnies who end up in shelters and rescues following the Easter holiday.

There are a few things in this world that I’m absolutely nuts about. Snakes are one, puppies are another. And then there’s chocolate.

As I write this, I’ve made an embarrassing number of attempts to scrounge for anything resembling chocolaty goodness. Worse, I’ve come up distressingly short. A packet of hot cocoa mix left over from a long-ago night hike. A lone chocolate chip, hidden for who knows how long behind a bottle of vanilla extract. And the freshest of the lot, a Reese’s peanut butter Christmas tree. Sure, Christmas was a few months ago, but still within memory. Which is more than I can say for the last time I bought chocolate chips.

So I guess it’s only fitting that this week’s column focus on a pro-chocolate effort I’m proud to endorse:  The Make Mine Chocolate Campaign. This Columbus,OH based organization aims to reduce the number of homeless bunnies-furry, not chocolate–that pop up in the weeks and months following Easter.

That’s right, homeless bunnies. Who knew? But sadly, it seems there are still plenty of folks out there who believe that live bunnies make good Easter gifts. After all, how much trouble could a little bun be?

As it turns out, plenty. They’re messy. They can bite. They can spray. And if kept in multiples, they can reproduce like, well, rabbits.

Thankfully, Make Mine Chocolate has assembled an impressive array of posters, videos and other materials that lay out the honest truths about rabbits and their habits. The facts include:

Now if you’ve ever visited Hickory Knolls, and met our own Peter Rabbit, you’ll know that we were not daunted by these stark statements. In fact, we suspect that Petey met at least some of those criteria. He was picked up as a stray in DuPage County in 2008, and after going unclaimed at Animal Control was transferred to Fur Angels Animal Sanctuary in Aurora where he received veterinary care, including neutering.

Over the past decade, Peter has gained a following of folks throughout the region. He’s adorable, for sure, but we’ve worked hard to use that cuteness as a gateway to rabbit ownership education. We make sure visitors contemplating the purchase of a pet bun know that there’s a lot more to its care than just food, water and the occasional scratch behind the ears.  Here’s a sampling of the sorts of information we share:

But if you or someone you know is considering the purchase of living, breathing Easter rabbit, think twice about caving in. Remember, that the little furball will still be with you 10 years down the road. If a decade of committed pet care isn’t your thing, you might want to make yours chocolate.