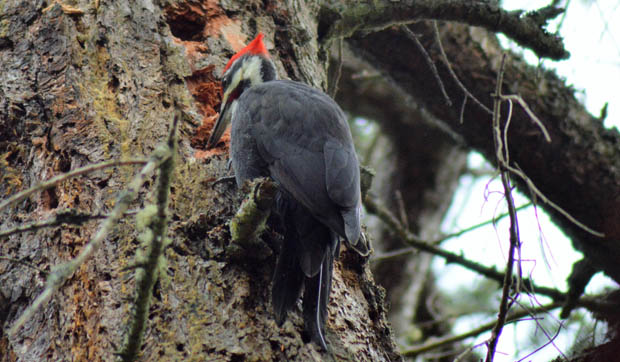 Photo Caption: The crow-sized pileated woodpecker has been appearing in our area with increased frequency. If  you’re not lucky enough to see the bird itself, you can still search for its distinctive excavations on dead trees or fallen logs in rich woodlands. (Photo credit: BryanHanson at MorgueFile.com)

Have you spotted a pileated woodpecker?

So there I was, walking through the easternmost woods of the Fabyan Forest Preserve in Geneva, when I came upon a curious sight: Fresh wood chips littering the ground beneath a dead tree.

But these chips, my friends, were not the delicate shreds dropped by a small woodpecker or chickadee excavating a winter shelter. No sirree. These chips actually were chunks-a LOT of ’em-scattered as though someone, or something, had gone at the tree with a hatchet.

The odd part was, the base of the tree was completely intact. Only after I looked up did I see from where the chips had fallen.

There, at a height just above my head, was a large, jagged but vaguely rectangular-shaped area where someone, or something, had whacked the heck out of the tree’s trunk.

The likelihood of a mad hatchet-er was considered, but only briefly. Not only did I not want to think that someone was running around the woods with a sharp implement, beating on defenseless trees, but I also found myself thinking the “hatchet job” looked somewhat familiar.

I’m 991/2% sure that it was the work of Dryocopus pileatus, the pileated woodpecker.

These birds, which for as long as I can remember have been considered rare in our area, have been popping up with increasing frequency over the last few years. After first encountering them in Michigan’s Upper Peninsula about 20 years ago, I started to familiarize myself with this large woodpecker and its fascinating habits.

About 15 years ago I was even lucky enough to come ambienbuy.net across a very unlucky pileated lying quite dead on a trail on Mount Adams in Washington state. Such a find let me study the structure of the bird’s amazingly strong bill, its barbed tongue, and its stiff tail-a trait that most woodpeckers possess, and use for support when pecking on trees.

It was about six or seven years ago that I saw my first Illinois pileated, at Starved Rock State Park in Utica. We initially came across the birds’ telltale excavations, then later caught two brief glimpses of the crow-sized birds flitting through the trees. About the same time I heard reports of pileated woodpeckers at Waterfall Glen Forest Preserve in DuPage County.

Then, this past spring, my friend Valerie had a pair of pileateds pop up in her oak wood lot in St. Charles. They stayed a few days but then moved on.

That, apparently, is what the Fabyan pileated did too. I looked for some time afterward, but did not find any other signs of its presence.

How about you? Have you seen any recent signs of pileated woodpecker activity? Look for, usually, rectangular-shaped holes on the lower part of a tree’s trunk. The cavities can range from a few to several inches deep, depending on how far the bird had to dig to reach its quarry-carpenter ants or perhaps other wood-dwelling insects.

If you find or are already aware of any signs, or actual pileateds, in the area, I’d love to hear about them. And be sure to tune in next week, when we explore more aspects of this remarkable bird’s life cycle and ecology.