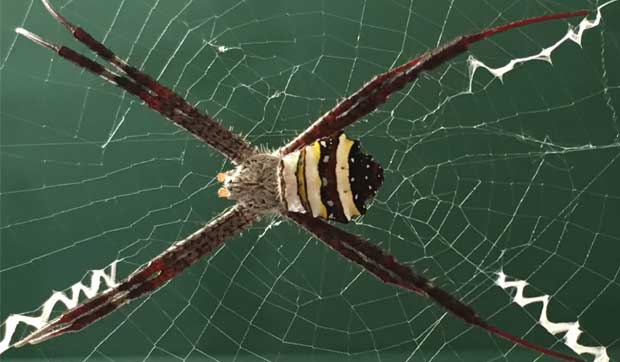 This spider may look like a local species, but it’s actually native to southeast Asia. Thanks to the internet and through the magic of email, this image made its way to Pam Otto’s inbox courtesy of Mac Bakewell, who lives in Pah Leuat, Tha Pla, Uttaradit, Thailand.

I was at Barnes & Noble the other day, killing some time between appointments, when I came across a jack-in-the-box. I’ll admit, I was a little taken aback that such toys are still allowed; I had sorta figured it had gone the way of wooden playpens and diaper pins. But there it was, in all its hand-cranked glory.

Of course I had to give it a try. It had the same tinny sound I remembered, and a very familiar-looking clown that popped up just as the song was about to end.

Which made me think of my email inbox.

Now, I don’t know about you, but I tend to get a fair amount of email correspondence. Quite a bit of it has to do with park district business, with another chunk stemming from groups for which I volunteer. But every once in a while, just like that monkey-chasing weasel, I’ll get a fun surprise popping up on the screen in front of me.

Take the other day, for instance. I was clicking through messages, responding, forwarding, etc., when Pop! I found myself staring at a beautiful Argiope spider. And not just any Argiope, mind you—this was A. versicolor. Although it resembles our local Argiopes, A. aurantia, a.k.a. garden spiders or banana spiders, and A. trifasciata, the banded garden spider, this one had crafted a web with four zig-zag structures, or “zippers;” that would be quadruple the number of zippers of our local species.

It didn’t take long to learn why this spider was so different. The photo was taken on a veranda in Tha Pla, Uttaradit, Thailand. The writer, a gentleman named Mac, had come across a Good Natured piece on Illinois Argiopes and wanted to share his enthusiasm for these beautiful creatures.

More scrolling, more responding, more forwarding, then Pop! Another nifty email surprise. Transplanted Illinoisan Susan Bell, who moved from St. Charles to Tucson a while back, sent a series of photos documenting the effects of that area’s warm and wet winter. Pop, pop, pop, pop, pop…pictures of cacti, javelinas, tarantulas and even a scorpion chased across my computer screen. Cool.

A few more clicks down the line and I was reading the latest response in an e-conversation I’ve been having with a fellow named Kenneth, who is a wildlife biologist with the Yurok Tribe in Klamath, CA. He and I share an interest in the small mammals—mostly shrews, but also moles, voles and mice–that wind up dead on the trails in our parks and preserves. Basically, we wonder what role, if any, trail systems play in the mortality of these animals.

In fact, in a weird coincidence, all of these small creatures are prey for one of our jack-in-the-box mammals, the weasel. Pop!

Speaking of coincidence, as I’m writing this, the email chime has signaled another incoming message—a note from an remarkable man whose photography is equally amazing. David Farber was sending his latest wildlife photos, wonderful shots of tufted titmice at Silver Springs State Park in Yorkville. You can read more about David’s work and his compelling life story at www.naturallyfarberphotos.com and http://theworldfromachair.blogspot.com.

Messages like these, along with the check-ins from many local readers reporting on everything from the usual to the unusual nature that surrounds us, are what really make my day. Pop! Goes the email.