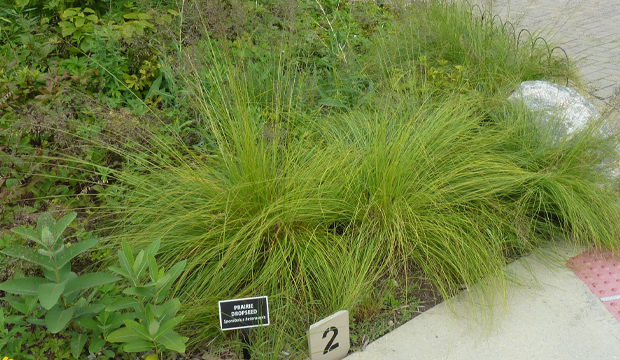 Fountain-like and fragrant, prairie dropseed can be found in prairie restorations throughout Illinois, as well as in native plant gardens such as this one at the Hickory Knolls Discovery Center in St. Charles.

The other day I was walking with my friend Kim in the Hickory Knolls Natural Area when we both picked up on this grass’s familiar, popcorn-y scent. Noses twitching, we veered slightly off the path toward the source of the alluring aroma, then cupped our hands around the blooming stems, inhaling deeply as we debated just which type of popcorn the smell resembled.

Oh I know, it seems weird that to say that a grass has blooms, and fragrant ones at that. But grasses, like all plants, need a way to reproduce. And flowers that turn into seeds work just as well for grasses as they do for the other, more obvious flowering prairie plants, a.k.a. forbs, like the goldenrods and asters.

However, when we talk about grass flowers, we’re not referring to the sort of showy display we’ve come to associate with that word. Forget colorful petals, or even sepals – the outer parts of a flower that usually are green and leaflike. Forget pollinators too, as they busy their days (and, for some, their nights) visiting those vibrant forbs; grasses, by contrast, are wind pollinated.

Grasses belong to the family Poaceae (formerly Gramineae) and as such are monocotyledons-monocots for short. They produce one embryonic leaf as they germinate, which not only is a significant accomplishment for the seed but also serves the main way botanists classify flower plants. (The other half of that division, dicotyledons, produce two embryonic leaves. If you or someone you know starts plants from seeds, you can probably picture what these tiny new growths look like.)

Grass flowers have a lexicon all their own. The flowering stem, or culm, ends in a widely spaced inflorescence called a panicle, which consists of many tiny branches that end in spikelets, each of which contain a single fertile floret.

It’s right about here that, just like they did back in Botany 101 at the University of Illinois, my eyes start to glaze over. Those spikelets contain parts with all sorts of wild names like glumes, lemma and palea that serve to help botanists further classify the grasses while simultaneously causing the rest of us to become further bamboozled.

Those structures, however, house the reproductive parts-the anthers and stigmas-that will ultimately give us more prairie dropseed. When wind moves the pollen around, from the reddish anthers to the feathery stigma, fertilization occurs and a small, round seed is formed.

It’s also in the panicle that the important – to my nose – job of aroma production occurs. Below the reproductive spikelets, in the lower 1/3 of the branches, each culm contains an elongated gland that produces that heavenly, popcorn-esque scent.

What I’m not entirely sure about is what function that tantalizing fragrance fulfills. Prairie dropseed is wind pollinated, and therefore doesn’t need to use aroma to attract insects, mammals or other pollinating creatures. (Although, if it did, and if I were one such pollinator, the plant could count on overwhelming reproductive success.)

My one guess as to the role of that popcorn smell is that it may in fact act as a repellent to some animals. Prairie dropseed regularly appears on lists of plants considered “resistant,” though not completely immune, to the grazing tendencies of animals such as deer and rabbits.

What’s also interesting about this grass’s aromatic qualities, and what may support the aroma-as-repellent theory, is that not everyone perceives the smell the same way. Other writers have variously described prairie dropseed as smelling like cilantro, chemicals and, somewhat depressingly, popcorn that has been burned.

If you, like me, like popcorn, now’s the time to head out and see if you can find some prairie dropseed in bloom. You can use your eyes and look for its wispy panicles which look, I kid you not, like the spray from a fountain. Or you can use your nose. Buttered, burned or somewhere in between, prairie dropseed’s scent is wafting through the air, waiting to be discovered in a prairie near you.