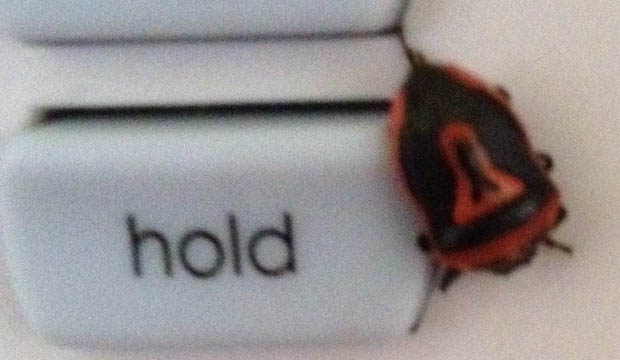 The two-spotted stink bug is quite different from the introduced brown marmorated stink bug currently plaguing the TriCities. Our two-spotted friend actually is a predator and should be welcomed to gardens throughout the area. Its favored prey is potato beetles.

Stink. It’s a word on everyone’s mind these days, given the influx of brown marmorated stink bugs we are all experiencing. But, sometimes, stink is just what a garden needs.

The other day my cell phone buzzed, signaling that I had received a text message. It was from my friend Tim, a.k.a. Park Safety Officer Tim Timberlake. Gifted with an eye for the out-of-the-ordinary, Tim frequently spots unusual characters-human and animal alike-in and around St. Charles. I’ve gotten texts from Tim about sandhill cranes, luna moths, flying squirrels and spiders-gone-wild. True to form, this text included a picture along with the words, “What is this?”

I’ll admit, I wasn’t sure at first either, and briefly wondered if the critter in the photo was fake. Boldly colored red and black, the insect’s markings seemed anything but natural and in fact reminded me of some sort of medieval crest, or maybe a cryptic corporate logo. But its intricate antennae and realistic bug pose soon convinced me that it was time to hit the field guides.

Or maybe I should say virtual field guides. Over the past few years, the Internet has given rise to a number of wonderful web sites that, dare I say, are easier and faster to use than the cumbersome paperback guides I grew up with.

My favorite, BugGuide.net, lets you narrow down your list of potential identities with just a few clicks of the mouse.

In this case, I could tell the insect was some sort of shield bug. Typing the words “shield bug” in the BugGuide search box, it was only a matter of seconds before I had page after page of insect images. From there I narrowed my choices down to Pentatomidae, the stink bug family, and from there to the subfamily Asopinae, the predatory stink bugs.

Wow, talk about a neat discovery! I’ve met many stink bugs over the years; watched them lay eggs on my patio door; smelled their “stink;” and seen the sort of blister their powerful chemical defense can cause. But while I’ve observed them on plants, and know that many make their living by sucking up plant juices, I had no idea that some actually are predators.

Sure enough, what Tim had discovered was a two-spotted stink bug, Perillus bioculatus-an insect with a knack for knocking off not just other bugs, but specifically bugs that gardeners consider harmful.

It turns out, a preferred prey item of the two-spotted stink bug is Leptinotarsa decemlineata, the Colorado potato beetle. Despite its western name, this little bugger is present throughout North America and has spread into Europe and Asia. No matter where it’s found, though, the result is the same: widespread destruction, not only to potato plants but also tomatoes and eggplants.

A single beetle can consume about 15 sq. in. of plant material a day in its larval stage, and another 4 sq. in. per day as an adult. Add in the facts that a female Colorado potato beetle can produce as many as 800 eggs, and that the species has an amazing ability to become resistant to chemical controls, and it quickly becomes apparent just how big of a pest this insect can be.

Now, did I happen to mention that Tim found his two-spotted stink bug at Primrose Farm Park, just a stone’s throw away from 264 community garden plots, most of which have potatoes, tomatoes, peppers and/or eggplants growing in them?

That stink bug and its kin-and here’s hoping there are lots of them-are like kids in a multi-acre candy store. During its developmental stages, called instars, a single two-spotted stink bug can consume 200-400 potato beetle larvae-numbers that are especially impressive when you consider the stink bug nymphs measure less than a half-inch in length, a smidge or two larger than their prey.

Equally notable is the stink bug’s own defense, a chemical array of compounds known as aldehydes. Highly concentrated, these chemicals are used to repel birds and other predators and can account for up to 5% of the insect’s body weight-roughly the equivalent of an adult human lugging around a one-gallon jug of mace, all the time, and being able to spray it in self-defense and produce replenishments as needed.

With colder weather on its way, I’d imagine the two-spotted stink bugs in our area will soon be heading for cover, either under leaf litter or inside structures like houses.

Like Tim, keep an eye out for these insects and, if you can, resist the urge to squish them-an action that would not only produce a cloud of stench but also also wipe out an important biological control agent for local gardens.

And that would really stink.