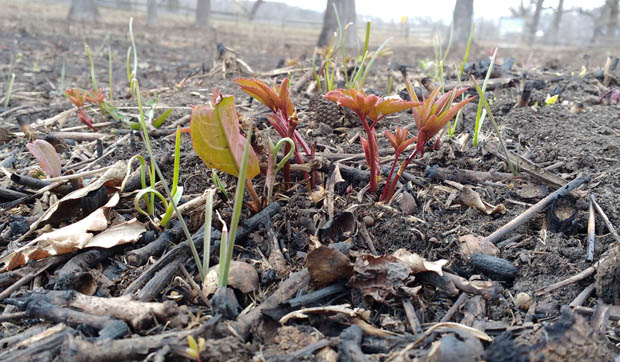 They’ve been common sights over the past several weeks: Billowing plumes of smoke erupting above our local parks and preserves. But instead of destruction, these fast-disappearing clouds signal restoration and rebirth.

Now that the weather *seems* to be moderating, you might consider taking a trip out to a nearby natural area that contains prairie or savanna habitat. You’ll likely find that it’s undergone a prescribed burn. A late winter and early spring that brought favorable conditions-light precipitation, low winds and humidity-made for a bang-up burn season for many local agencies. And now, with spring finally in full swing, we are able to enjoy the benefits of these activities.

The other day I was walking through the Hickory Knolls Natural Area and couldn’t help but notice the way the recently burned prairie had acquired a beautiful hue of green. The blackened stubble of last year’s plants is gradually giving way to this year’s new growth, a varied mix of grasses and forbs (literally, “flowering plants that are not grasses”) across the hills and into the trees.

At first glance, the practice of setting stuff on fire can seem kinda heavy handed, not to mention dangerous. But the fact that burns return nutrients to the soil, combined with the way our native ecosystems are adapted to fire means that the plants and the animals actually emerge healthier because of it. That’s also why “prescribed burn” has become the preferred term for referring to this management practice. Done properly, by highly trained teams, a burn acts like a prescription that results in renewed vigor along with the very desirable side effect of greater diversity in the plant community.

I’m always amazed at the speed in which a prairie area comes back after a burn. Its secret lies not in the dried leaves and stems above the ground-those disappear in a flash-but rather in the roots that extend many feet down. Add a little warmth from the sun, and little moisture in the form of spring rains (or, this year, spring snows) and those roots release the food they’ve stored all winter in a rush of green shoots.

Other plants (mostly nonnatives, but a few invasive natives too) are not so lucky. With shallow roots and, in the case of certain trees and shrubs, thin barks, they don’t tolerate the heat of a blaze-which is another reason why fire onhealthy.net plays such an important role in natural areas management.

Plants that have been introduced here from other parts of the world can enjoy lots of advantages, like a lack of animals that feed on them and a tendency to produce lots of seeds. Left to their own devices, they quickly can form a monoculture that provides little in the way of food or habitat for native wildlife. But fire can be a great equalizer.

Some of you may remember what the area that is now Hickory Knolls was like back in the early 2000s, and before. The site where the nature center sits was community garden plots, and what we today call the savanna was, back then, a turfgrass-covered parking area dotted with century-old oaks. Squirrels lived in the trees, and still do. Birds and insects cavorted among the branches. But the grass was devoid of animal activity, save for the chipmunks and ground squirrels that burrowed into the soil below.

The changeover began in 2009. The grass was allowed to grow long and then was treated with a chemical and burned. I don’t know if you’ve ever seen the roots of any of the various grass species that fall under the broad name of turf, but let me tell you, they are short. The one-two punch of a little bit of herbicide and a fast-moving fire knocked out the grass and gave our ecological restoration team the substrate they needed to begin planting native seeds and plant plugs.

If you visit Hickory Knolls to check out the ensuing benefits of prescribed burns, be sure and visit this particular spot right behind the building. Save for some die-off at the ends of the oak branches (the unfortunate consequence of the root compaction that occurred during the parking lot years) it’s hard to tell that cars used to outnumber native plants beneath the oaks. Beginning with woodland wildflowers in April and winding up with diverse goldenrods and asters in September, the space pops with color spring, summer and fall.

And, if you stop by soon, you’ll notice that this area, too, has been burned. Seeing the new plant growth rising amid the scorched twigs and acorn caps is a great reminder: Where there was smoke, there was fire. And now native plants grow higher.