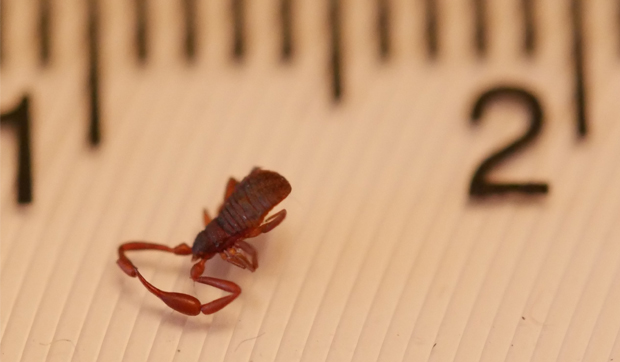 Photo Caption: Pseudoscorpions are very tiny – this one’s body measured just over 2mm – and lack the rear tail and stinger true scorpions are known for.

When it comes to tiny arachnids, there’s one individual that grabs a disproportionate amount of the glory. We all know her, and the song that made her famous: The Itsy Bitsy Spider.

But you know what? This world of ours has many more awesome arachnids, some of which are not merely itsy bitsy but pretty darn close to microscopic. In fact I found one the other day-a pseudoscorpion, trapped (somewhat ironically) in a spider web. One look and I was quickly reminded how intriguing these minuscule motes can be.

I know what you’re thinking. Scorpions? In Illinois??  While we do have a true scorpion species in Illinois, the striped bark scorpion, it doesn’t occur in our area. Pseudoscorpions, on the other hand, are pretty much everywhere. The thing is, they’re so small, they tend to go completely unnoticed by big beings like us.

Averaging less than 1/4 in. long, pseudoscorpions inhabit areas in and around homes that provide sufficient amounts of two life-giving essentials: humidity, and food. Those steamy showers you love to take? That pesky seepage in your basement? Both help create ideal environments for pseudoscorpions. And all the microbiota that comes along with being human? That’s what provides the food.

In the 25 years that I’ve known about them, I’ve found exactly two of these remarkable creatures. The first was clinging to the wall behind the hand towel hanging in a bathroom. I initially mistook it for a spot that needed cleaning, but then it moved. Ever so slightly.

As I leaned in for a closer look, the little guy waved its teensy pedipalps-the claw-like appendages it held above its head-in a motion that meant either Go Away or Don’t Hurt Me. Then, in a move I regret to this day, I went into my office to get a magnifying glass. In the two minutes or so that I was gone, the wee individual had scrabbled away, likely slipping into a little gap between the wall and backsplash.

Two and half decades later, pseudoscorpion No. 2 showed itself, this time in the rarely used downstairs bath. The good news is, this latest specimen didn’t move a bit as I moved menacingly toward it. The bad news was, it was dead.

The silver lining of its demise, though, meant I could study its remains pretty closely without having to worry about its future well-being. It was also an excellent excuse to defer the drudgery of the deep cleaning and focus on something really fascinating.

Using a watercolor paint brush, I swept the tiny critter onto a piece of cardstock (okay, yes, it was a Christmas card) and brought it upstairs where the light was better, and where I’d be better equipped for an in-depth investigation.

Using a 10x loupe and a toothpick, I carefully removed the remaining bits of spider web from the pseudoscorpion’s appendages. I was a little bummed that one of its pedipalps, or pincers, was missing, as were the ends of some of the legs. Still, there were enough parts still intact to figure out, with a fair amount of confidence, that I was looking at Chelifer cancroides, the house pseudoscorpion or book scorpion.

C. cancroides is what’s known as a cosmopolitan species-that is, it lives everywhere around the world that it can find its preferred habitat of darkness and humidity with abundant food. In fact, it’s that food that makes pseudoscorpions something to be welcomed, rather than eliminated, from our homes.

As a leading member of the Good Guys Crew, pseudoscorpions eat all sorts of undesirables: Fly larvae. Carpet beetle larvae. Clothes moth larvae. They’ve been known to feed on varroa mites, the bane of beekeepers everywhere. There’s even a report by a World War I prisoner who observed C. cancroides feeding on bedbugs in his cell in Russia.

But what they’re best known for, and the trait that gives them one of their common names, is their appetite for booklice. Booklice, which are not the same as the bloodsucking head lice we all dread, eat mold and fungi as well as the starch used in the glue of old books. Small and white, they roam between the pages and bindings, wreaking havoc on prized collections. That is, unless pseudoscorpions are on duty.

Instead of using mouthparts to inject venom, as spiders do, pseudoscorpions rely on venom in their pincers to capture each meal, be it booklice or some other sort of undesirable. Once subdued, the mini-prey is then liquefied and consumed-slurped, actually–by the mini-predator.

If you should find you’re sharing space with a pseudoscorpion or two, there’s no need for alarm. They’re too small and their venom is too weak to have any effect on humans. As long as the cause of their humid environment is under control (that is, no pipes are leaking and your home’s foundation is solid) you’ve got nothing to worry about…other than the amount of time you’re going to lose observing these captivating creatures.