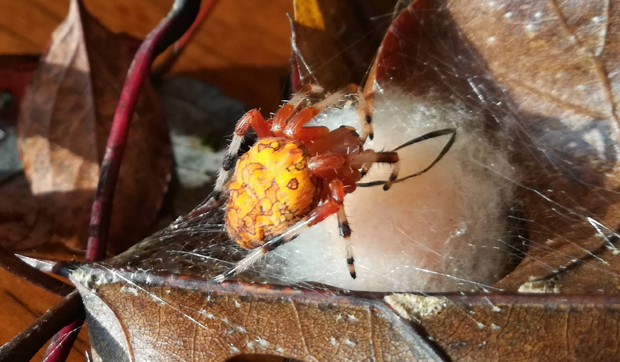 Long, thin ‘beans,’ or seedpods, that rattle like maracas are a sure sign that honey locusts are nearby. Some varieties though are fruitless, so also be sure to look for the tree’s compound leaves and plated, gray bark.

Pumpkins at this time of year usually look one of two ways: Plump and firm, or soft and saggy. At my house, I’ve got one of each.

The firm one will probably go outside soon so it can become squirrel food. And the saggy one? Well, she’s going to stay right where she is, on the kitchen counter. With her egg sac by her side. Because she’s not just a pumpkin, but a pumpkin spider, Araneus marmoreus. And her arrival was a dream come true.

A couple Fridays ago I got a call from Linda Ostrander in Batavia. She said she had been raking leaves and found what she first thought was a child’s ring-something, she thought, that had fallen off a Halloween costume the night before. It was brightly colored and pretty large, about the size of a small gumball, with a splendidly intricate pattern. She picked it up to admire it but, surprise surprise! The ring sprouted legs and ran across her hand before plunging back into the leaves.

Not particularly fond of spiders, but o-so curious about this wondrous creature, Linda captured it in a deli cup. She and her husband Terry did some research on orange spiders in October in Illinois, and it wasn’t long before they realized what they’d found. Even better, they decided to share their good fortune!

That’s where the dream-come-true part comes in. I can’t tell you how long I’ve searched to find a pumpkin spider of my very own. I came close about four years ago when I found an orange spider in October at Starved Rock State Park. Like the Ostranders’ spider, that big girl was an orbweaver, but she lacked the other identifying marks of A. marmoreus.

Alas, my fruitless searches continued. Until two weeks ago. In an act of generosity I’m still struggling to comprehend, Linda not only called me up to share the news of her find, but also shared the actual spider-deli cup and all!

At first I faced a bit of moral dilemma. I’ve a firm believer in keeping wildlife in its place. Little good and, often, lots of bad can come when animals get moved around willy nilly. But in this case I made a spur-of-the-moment decision. Knowing that more cold temperatures were on the way, I decided to adapt my thinking and adopt Ms. Pumpkin Spider, so that others could learn from and about her.

Also known as the marbled orbweaver, marmoreus is one of many Araneus species that call our area home. True to their common name of orbweaver, Araneus gals spin quintessential round, or orb, webs that feature straight rays supporting a spiral of sticky silk. (Fun fact: depending on species, spiders can produce up to seven different types of silk. Each kind has a distinct purpose, such as providing shelter, catching prey or protecting eggs. Spider silks are strong, resilient and altogether amazing. But I digress.)

Linda’s pumpkin orbweaver likely spent the summer feeding on insects and other arthropods that became ensnared in her web. She’d repair the web pretty much every night, keeping it in top condition for her survival depended on it. Somewhere along the way, she met a Mr. Spider and, well, let’s just say a future generation was ensured.

By the time Linda found her, Ms. Spider literally was about to burst. Her gumball-sized abdomen was full of eggs. She had one more task on her to-do list, and that was to deposit those eggs and safeguard them with layers of weatherproof silk.

Upon arriving at Casa Otto, Ms. Spider wasted little time. Linda had thoughtfully packed the deli cup habitat with moist leaves, and the bulbous arachnid used them to her best advantage. She quickly created a small lair by using silk to bridge between the opposing sides of a curled leaf.

There she remained for about two days. Then, in what must have been a monumental effort, she deposited what looks to be hundreds of orange eggs. (I suppose here I should add that another item on my wish list is to observe spider egg-laying behavior. This one’s going to have to wait though, because Ms. Spider worked an overnight shift and I missed the whole thing.)

Which brings us up to today. The eggs are surrounded by fluffy silk and Ms. Spider is soft and saggy. She’s wholly uninterested in the habitat I created for her, preferring to stay close to the creation that will be her legacy.

I suspect her orbweaving days are over. If and when she passes, I will place the leaves and egg sac back in the deli cup and, since it seems like a chilly environment would be most natural, put the little nursery in the garage for the winter months. I’ll check on it periodically and keep a close eye next spring as I’m preparing my garden. When the pumpkin seeds begin to sprout, I’ll bet the pumpkin spiderlings will too.