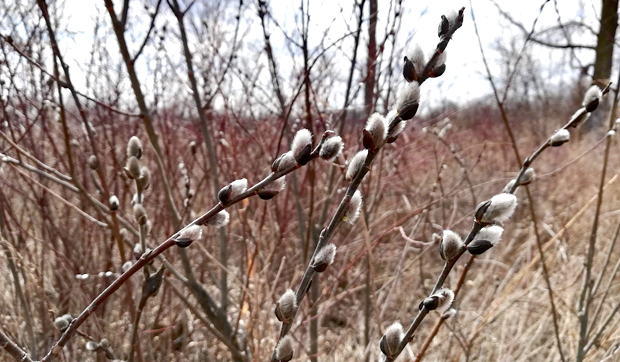 Named for the gray buds of its male flowers, our native pussy willow is an important source of pollen and nectar for early spring insects.

There was a time back in the late 1960s when my dear mom, bless her heart, thought her eldest child– and only daughter–should play the piano. A baby grand was procured, and the child took to it from the start. She loved the way the pedals made a note last almost forever, and how strings could be plucked, harp like, within the instrument’s housing. She also loved how Matchbox cars could be rocketed up over the raised lid and land nearly halfway across the living room, right in front of the antique lamp.

Three years and two teachers later, it became apparent that the title “pianist” was not in this child’s future. She-okay, I-could not for the life of me get my left hand to hit the proper keys, much less at the proper time. Practicing, which was to occur each day after school, turned into a torturous half hour of scales followed by ragged renditions of such classics as C-D-E Made a Boat and C-B-A Leads the Way.

I don’t recall much from those early days of my musical career (which later progressed to the trumpet and, lately, a kazoo) but I do find it interesting how snippets of those simple songs pop into my head when music is the farthest thing from my mind.

So it was the other day when I was walking at Ferson Creek Fen in St. Charles. It was warm for this time of year, and the sights and smells of spring were all around. The pungent aroma of skunk cabbage wafted up from the moist soil (“I Stuck My Head in a Little Skunk’s Hole…”) while overhead-even though it was the middle of the afternoon-the nearly full moon sat high in the eastern sky (“I See the Moon, and The Moon Sees Me”).

As my visit drew to a close I was heading back to the car, listening to song sparrows sing sweet variations of their own songs when, Wham! I encountered a fantastic collision between the celestial and terrestrial, set to these lyrics:

The moon has climbed the highest hill
That looks o’er land and sea
To see the little pussies on
The pussy willow tree.

Granted, the “sea” was the Fox River but other than that the song was pretty darn accurate. There before me stood a willow, its flower buds just starting to reveal their soft, gray fluffiness.  Mee-yow! This  discovery sent me off on yet another adventure, to see what I could learn about this appealing local shrub.

A quick text to our restoration ecologists let me know that the species I was looking at was native, making it Salix discolor. (The other alternative, S. caprea, is the Eurasian pussy willow also known as goat willow–for the way goats devour it–that’s been known to pop up from time to time.)

My next stop was the Good Natured World Headquarters Library, where I pulled out Kane County Wild Plants & Natural Areas, a most excellent native plant reference written by legendary naturalist Dick Young. He describes S. discolor as charming and in fact notes that willows in general are a rich part of our history and landscape as well as a “source of ornament, sentiment, shade and aspirin.” (It’s true! Well, sort of. Willow bark contains salicin, which when consumed along with the flavonoids and polyphenols present in the bark creates an analgesic and anti-inflammatory effect that has been prescribed for thousands of years. Modern day aspirin, by contrast, contains salicylic acid synthesized chemically.)

Curious about the shrub’s scientific name, I turned to www.wildflower.org, a fantastic plant database, and learned that Salix is Latin for willow and means to leap or spring, which is an apt description of willows’ rapid growth habit. Discolor refers to the leaves, which are shiny and medium to dark green on top and pale green to almost white underneath.

But what was most fascinating was the willow’s namesake buds. For one thing, just the fact that I saw them told me that I had found a male tree. Willows are dioecious, meaning male and female flowers are on separate plants; plus the female flowers remain sheathed in their brown scales a bit longer than males, and when they open look more like fuzzy green caterpillars.

Covered in furry gray trichomes, or plant hairs, the male buds are well insulated from the heavy frosts that can occur in the wet areas where they grow. It’s this stage that the plant is most recognizable. It’s the next stage, however, that the true value of pussy willow comes to light. The pollen produced by the male catkin, or flower cluster, can be dispersed by wind, but it also serves as a valuable early-spring food source for pollinators like solitary bees and honey bees. Both male and female flowers, once open, also have nectar glands to reward these insects for a job well done.

I’ve got lots more to learn about this familiar flowering shrub, but first I need to see what I can do about amending the lyrics to one more memorable piano exercise: