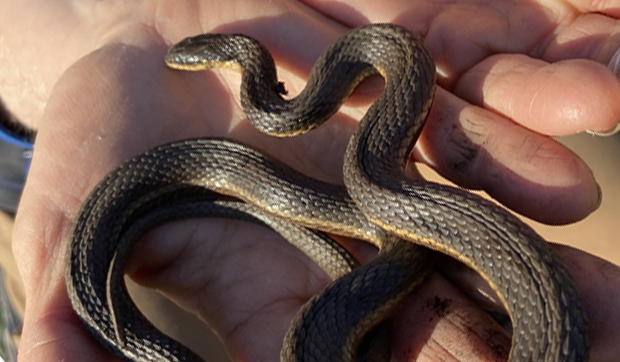 This young queen snake was found during an ecological restoration project in a St. Charles park along the Fox River. The bandage was work related but not snake related.

Except for one time, nearly 35 years ago, when I found myself eating ice cream in a supermarket with Prince Andrew and his then-wife Sarah, the Duchess of York, my brushes with royalty have been as rare as robin’s teeth. Let’s face it; we just don’t have that many crowned heads running around our suburban parks and preserves.

So imagine my surprise a few weeks ago when I received a text message from Ryan Solomon, our lead restoration ecologist, that included pictures of a real live queen. She, or maybe he, was looking quite noble in the hands of one of the other ecologists, and with just a little manipulation of the photo her, or maybe his, identity became clear. They had indeed stumbled upon Regina septemvittata, a regal reptile also known as the queen snake.

No tiara, no scepter, not even a robe…this queen had been found amid the vegetation at in one of our fine St. Charles nature preserves along the Fox River.

“How fortuitous!” I thought, seeing as we’d just finished taking a Good Natured look at crayfish these past couple of weeks. Ah, but what, you might ask, does a queen snake have to do with crayfish?

As it turns out, pretty much everything. R. septemvittata is a specialist predator, feeding almost exclusively on freshly molted crayfish. In much the same way my baby brother ate only hot dogs and peanut butter crackers until age 10, queen snakes eschew most other types of aquatic prey in favor of soft-bodied crustaceans throughout their lives.

Sure, the occasional frog or tadpole probably slips down the ol’ gullet. But, as we learned last week, we have nonnative rusty crayfish aplenty in the Fox River and its tributaries. Needless to say, the queen’s presence is welcome.

So how can you tell whether you’ve found a queen? It’s true they lack the regalia of human royalty. But they have several traits that are pretty easy to identify, even if you’ve never seen a queen before.

Adults are predominantly olive green, or brown, or brownish olive green, and their dorsal scales are strongly keeled-that is, each scale features a central raised ridge. These keels give the animal a matte, rather than shiny, appearance. The snakes also have two prominent yellow stripes, one on either side of the body down where the belly scales meet the side scales. That belly is light in color, with two dark stripes running down the middle and two more on either side of those ventral scales.

Math aficionados will notice that the sum of those stripes is six. Yet Latin aficionados, and I know you’re out there, will point out that the queen’s species name, septemvittata, would indicate that seven stripes are present. What gives?

As it turns out, young queen snakes (which are not called princesses) have a seventh stripe present along the middle of the back. This stripe fades with age, though, and is gone completely by the time a queen matures.

As the restoration team learned, queens are also relatively mild mannered. Unlike their cousins the Nerodia, or water snakes, which favor a bite-bite-bite-then-bite-some-more defensive strategy, queen snakes use the more subtle, but equally effective, tactic of squirming-some references add the adverb “violently”– while ejecting feces and musk.

Despite the feminine-sounding name, queen snakes come in both male and female varieties. In our area they mate shortly after emerging from hibernation, which usually is late April or May; females subsequently give birth to up to a dozen young any time between late July and September. Like their parents, these young queens seek out crayfish that have recently molted. However their small size-about 7 1/2 in. at birth-means that the crays need to be small too.

But again, as we saw last week, crayfish off all sizes are in good supply in our local waterways. While rusty crayfish do tend to display a more aggressive and defensive in nature than our native species, when they’ve just cast their tough exoskeleton they are just as vulnerable-and, I’d imagine, tasty.

It seems like it wasn’t too long ago that queen snakes were a relative rarity in central Kane County. They’re still not super common, but we are definitely seeing them with increased regularity. These sightings are especially heartening as we watch the numbers of rusty crayfish rise.

Is there a connection between more rusties, and more snakes that feed on them? It’s too soon to tell; more observation and data are needed. But one thing’s for sure. Even out here, in the far western suburbs, it can be good to be queen.

Pam Otto is the outreach ambassador for the St. Charles Park District. She can be reached 630-513-4346 or potto@stcparks.org.