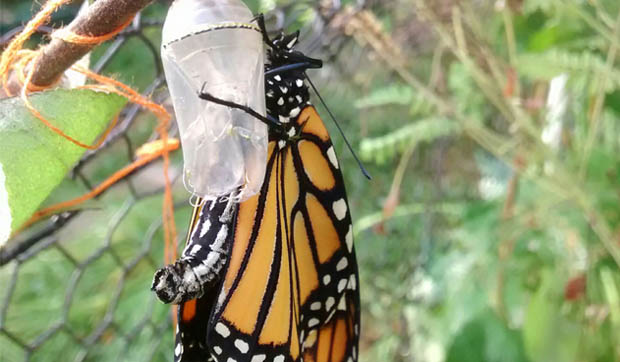 A member of the monarch super generation lets its wings fill with fluid after eclosing, or emerging, from its chrysalis. Barring any unforeseen difficulties, it should arrive at its overwintering grounds in Mexico in November. (Photo courtesy of Jill Voegtle)

A few week s ago we alluded to the fact that monarch butterflies are having a hard time. Human activities combined with inclement weather in Mexico, where the insects overwinter, has resulted in some pretty severe declines in their overall numbers.

As a result, many people have taken on the task of raising monarch caterpillars and then setting the adults free.

I’ll be honest, at first I didn’t know what to make of this new practice. To me, a healthy animal is most at home in its natural environment. Once humans get involved, there’s always a risk of introducing pathogens foreign to the critters, which they then may pass on to others in the population.

There’s also the potential problem of neglect. What happens when you want to get away for a weekend, or a week, and your little ones need fresh milkweed leaves daily? Sometimes it’s easy to find a willing “babysitter,” but sometimes it’s not.

After considering these pitfalls of monarch raising, I started to take a look at the positives. And you know what? There are many.

For one, monarch caterpillars are just as vulnerable to predators and parasites as other caterpillars. It was long thought that these larvae were basically bulletproof, due to the toxins present in the milkweed sap they ingest daily. But hazards arise even before the caterpillar phase begins. Critters like ants and spiders eat monarch eggs-I’ve seen this myself, on the milkweed in my yard. Then, once the eggs hatch, parasitic wasps and flies can move in, laying eggs on the little cats. From then it’s not long before the larvae get eaten from the inside out.

These perils, combined with a series of bad weather events and continued deforestation in the monarch’s overwintering grounds, have resulted in the butterfly being considered a candidate as a federally endangered species.

Thankfully, monarch caterpillars have lots of fans-heroes, even-that have rallied around the cause. They raise monarchs from eggs to adults, then set them free to face their fate in the wild world.

This time of year is especially important, as it’s the time of the monarch “super generation,” that group that will make the amazing trip from their natal grounds to their overwintering site in the Sierra Madre mountains of Mexico. They don’t pass Go, they don’t collect $200 (yes, that’s an obscure monarch-Monopoly reference). Heck, they don’t even take time or energy to breed prior to starting their journey, which can be as far as 3,000 miles. On wings as thin as paper.

The butterflies of this generation are quite a bit different, physiologically, than their predecessors. For one, the combination of shorter day lengths and cooler temperatures causes the new adults to emerge from their chrysalises in a state of reproductive diapause. Whereas previous generations started breeding within days, the super generation delays this activity until spring.

Super monarchs also have an increased ability to store fat, which is essential not only for their magnificent journey but also to their surviving winter in an area that has very little in the way of food sources.

Although we have yet to see large groups of monarchs heading south (a phenomenon that has become rare as the butterfly’s population has dwindled) the migration nonetheless has begun. Over the next two months the insects will travel as many as 50 miles a day before reaching their destination, the Oyamel fir forests in the mountains west of Mexico City, in November.

Nectar, not just from milkweed, will be essential to a successful flight. It’s the monarch’s jet fuel as they make their way across the plains. Cool temperatures in Mexico this winter will be important too, as such conditions help monarchs conserve the energy they’ll need for the return trip next spring. The Oyamel firs offer shelter, but no food for their winter guests.

Don’t get me wrong, the monarchs that overwinter in Mexico will not make it back to Kane County. They’ll fly a distance, then enact their delayed breeding drive. Those offspring will continue the trek, creating descendants that will move farther along, heading toward the natal grounds of their super generation forebears. In our area, we usually see arrival in June.

Time is short for raising and releasing monarchs this year, but it’s never too soon to start planning for the next. The internet offers some wonderful resources for potential butterfly raisers. A great place to start learning about monarchs, and migration in general, is Annenberg Learner, which hosts a fabulous set of pages called Journey North. Written in easy to understand language, these pages can be accessed at learner.org/jnorth