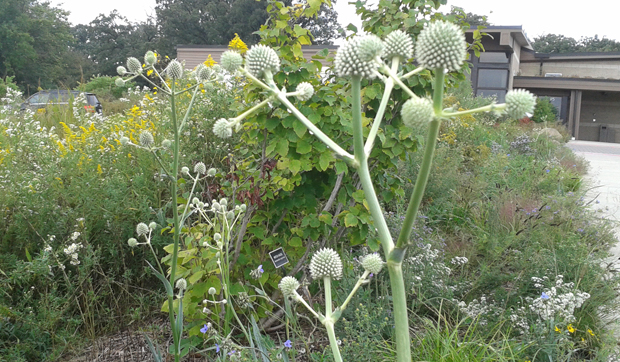 Walking up to Hickory Knolls, our wonderful nature center, I never cease to be struck by the abundance of beauty displayed by our native wildflowers. More than once this summer I’ve stopped to take pictures of the magnificent milkweeds, the stunning coneflowers, the St. John’s wort so irresistible to pollinators that it is positively swarming with bumblebees and honey bees.

But throughout this past month or so, one flower has grabbed my attention more than any other. It doesn’t have showy colors, nor does it grow particularly tall-well, at least as far as prairie plants are concerned. It doesn’t even have much of a fragrance-not that my paltry sense of smell can detect, anyway.

Nope, what really makes this plant stand out are its curious, globular flower heads. They sit atop long, thick stalks like so many small, fuzzy disco balls, providing contrasts in both shape and color as compared to their more typical prairie flower neighbors.

It’s only fitting that this odd plant would have an equally odd name: rattlesnake master, Eryngium yuccifolium.

Oftentimes, either the common or scientific name for a plant reveals something interesting about its past. In this case, both names are so fascinating it’s hard to choose which to describe first.

For the sake of simplicity, let’s go with alphabetical order. The genus name Eryngium is from the Greek word for “plant used to cure indigestion.” Indeed, Native American tribes as well as Europeans settling here in the New World would use various parts of the plant as treatments for various digestive disorders, including “expulsion of worms.”

The species name yuccifolium refers to the plant’s distinctly yucca-like foliage. The only weird thing about that, though, is that there is no botanical relationship at all. Yucca is a succulent and a member of Asparagaceae, the same taxonomic family as, yes, asparagus. E. yuccifolium is a member of Apiaceae, the parsley/carrot family. (In fact, some of the ancient concoctions derived from this plant were described as tasting like bitter carrot.)

The common name “rattlesnake master” comes from the plant’s purported ability to heal the effects of a rattlesnake bite. The story goes that an 18th Century author named James Adair conducted trading with Amerindians of various groups in the Southeast. He wrote about observing various rituals, including chewing the root of rattlesnake master, blowing upon the hands, then gaining the ability to handle rattlesnakes without consequence.

That claim has since been disproven, but other factual accounts describe the use of the dried seed heads as rattles in Native American dances. In addition, the plant’s roots and leaves figured widely in native people’s treatments of various ailments including chest pains, intestinal ailments and bladder woes.

I’m not sure rattlesnake master would be my go-to for mending those maladies but, I tell you, I’m really intrigued by the uses many cultures found for its leaves. Fibrous and strong, they were used to create footwear and carryalls-functional items that might have been fashionable too.

The Arnold Research Cave in Missouri, and the Montgomery and Spiker Shelters and Arch Vaughn Cave in Arkansas, all have yielded numerous examples of shoes and bags fashioned from the leaves of rattlesnake master. Some of these artifacts date back an astounding 8,000 years!

In a neat project carried out at Louisiana State University, researchers examined the relics, then recreated them using ancient production techniques. Just like an industrious worker from the Early Woodland period (ca. 900 B.C.), the scientists harvested narrow, immature rattlesnake master leaves to twist and braid into bags. And in the same method that an individual from the Mid-Archaic period (ca. 2400 B.C.) might have used, the scientists cut strong, mature leaves to recreate a shoe with a round toe and a sling heel.

In examining this particular shoe, the researchers noted that it had been mended. Someone, way back when, had re-stitched the top of the shoe back onto the sole. The cordage used for the repair wasn’t specified, but I’m going to guess it might have been made from…rattlesnake master?

There’s no doubt, E. yuccifolium is one tough customer. It has to be, as life on the prairie is no picnic. Those fibrous leaves that made durable footwear so long ago also help the plant stand up to grazing; meanwhile, a long tap root makes the plant fairly drought resistant.

These fine qualities, combined with its connections to music, fashion and, well, snakes, all make rattlesnake master a timely topic-not to mention a welcome component of native gardens and prairie areas throughout our region.