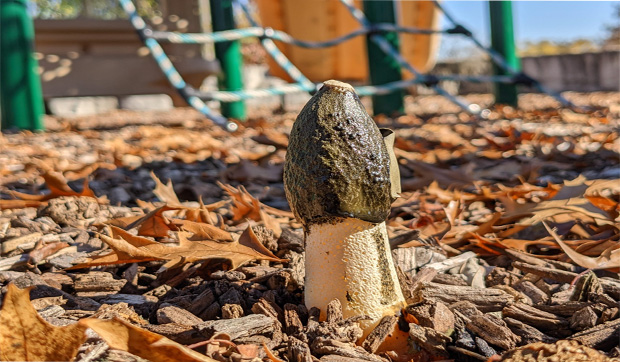 A Ravenel’s stinkhorn grows amid the wood chips at a local playground. These powerful decomposers, it turns out, are mighty stinkin’ strong.

So here’s a question for you… When you think about the nature in your neighborhood, and the parts of it that symbolize might and power, what images come to mind?

Maybe you’re envisioning a magnificent bald eagle, soaring majestically overhead; or perhaps a formidable great horned owl, whose nickname is Tiger of the Sky. Within the plant kingdom you might be picturing a mighty oak or hickory, either of which can stand rock solid for hundreds of years.

I have to admit, if I was asked that question a couple of weeks ago, I probably would have said a cougar a.k.a. mountain lion. They’re mighty and powerful-and topical, given that not one but two recently made their way into our state from points west.

But then I had a run-in with a stinkhorn.

You might be familiar with this relatively common family of fungi called Phallaceae. They tend to pop up in wood chips or other areas with an abundance of decomposing wood-a popular substrate for many types of mushrooms. But while other fungi go about their business of breaking down organic matter in quiet fashion, stinkhorns, well…they raise a stink.

We recently became aware of a fine array of a very special stinkhorn, Phallus ravenelii, growing amid the wood chips of one of our St. Charles Park District playgrounds. We’d received a call from a resident who was concerned about the mushrooms, and the smells they were emitting, by the slides and other areas of the play structure.

Mushrooms, you probably know, can make people a little nervous. Although they are important components of our local ecosystems, their role as decomposers often gets overshadowed by their reputation for being deadly. It’s true, some are killers-the Amanita genus has species with common names like destroying angel and death cap-but the thing is, they have to be ingested in order to be lethal.

Stinkhorns, by contrast, are not deadly, even if one should, through whatever odd turn of events, end up in someone’s mouth.

They do smell bad, at least to some people. Those so gifted describe the odor as pungent and/or putrid and “reminiscent of rotting flesh.” Dimethyl trisulfide-the same compound present in overcooked broccoli and stinky cheese-combines with other chemicals to produce the stench, which in turn attracts the flies that help disseminate the mushroom’s spores.

But I gotta tell ya, try as I might, I just haven’t been able to sense it. I spent a good deal of time crawling around the stinkhorn playground, on two separate occasions, and all I could detect was the smell of…mushrooms.

But what I was able to perceive, and why this mushroom has me so awestruck, is the way it’s able to pop up, quite literally, in just a few hours.

As is the case with most fungi, the part we see above ground-the mushroom-is merely the fruiting body of the organism. The workhorse parts, which actually perform the decomposition of the substrate, are a vast underground network of threadlike structures called mycelia.
But the mycelia, as hardworking as they are, can’t help the fungus reproduce. That’s where the mushroom comes in. It produces the spores that get dispersed by wind or animals, depending on species.

With stinkhorns, dispersal is dependent on that stinky horn attracting those aforementioned flies. When it comes time to reproduce, the stinkhorn mycelia produce an oval-shaped “egg”-known by some as “devil’s eggs (NOT deviled eggs)-near the surface of the substrate.
Through osmotic pressure, the stinkhorn bursts forth, growing at speeds that have been clocked at 10 to 15 cm per hour. So strong is this force, mycologists have reported stinkhorns breaking through the glass of a jar, pushing up asphalt and breaking concrete.

Intrigued by this phenomenon, scientists at the University of Belgrade in what was then Yugoslavia used mathematical analyses to calculate that a single specimen of the species Phallus impudicus-close cousins of the playground stinkers-can produce a powerful force of 1.33 kN/m2. For us non-physicists in the group, and for those of us who don’t speak metric, that figure translates to a mighty impressive conclusion: Three stinkhorns growing in a group can lift about 880 lbs.

A bald eagle, by comparison, can lift 5 or 6 lbs. taking off from flat ground, maybe twice that weight when launching from a hillside. A cougar, meanwhile, can cache an adult deer weighing 200 lbs. in a tree. But a cougar weighs, say, 150 lbs., while a stinkhorn weighs, according to my kitchen scale, 0.6 oz.

A soft-bodied organism that can lift thousands of times its own weight? That’s mighty stinkin’ strong!