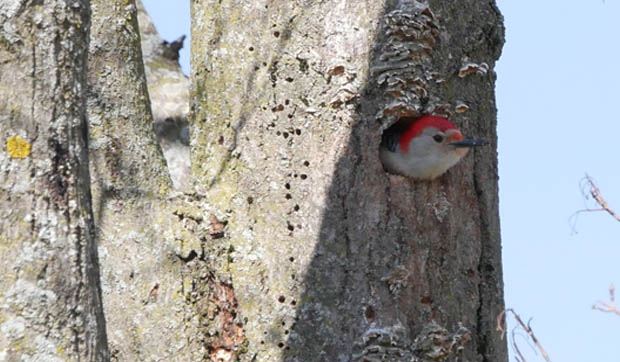 The male red-bellied woodpecker, Melanerpes carolinus, can be identified by the red nape and crown, which extends to the base of the bill. Females have a red nape only.

I’m gonna go out on a limb here and guess that your life has changed quite a bit over the past couple of weeks. I know mine has.

Work days, once full of nature programming for a variety of audiences, now consist of creating social media posts and editing video footage of nature phenomena. And writing!

Home life has changed too, since much of this work can be done from here. I’ve actually found I’m getting more done, faster, by not leaving the house and heading to the office. That’s great for me, but I’m not sure what my roommates make of it. The furry ones seem put out that I keep disrupting their naps, and the feathered one squawks, really loud, unless I pretend like every waking hour is all about him. The scaly one pretty much keeps to himself, but that’s just what turtles do.

Meanwhile, though, it’s business as usual for the wildlife outside. Maybe even a little better than usual, since there’s not so many people racing around.

With the equinox last week, spring officially has arrived. Which means the animals have a lot of important work to do.

I was reminded of this timetable last Thursday, as I set out on a walk around the neighborhood. A red-bellied woodpecker was calling incessantly from a maple tree near Davis School in St. Charles. Having more than a little free time on my hands, I decided to head over and see if I could see what all the excitement was about.

Have you ever watched a new building going up? If so, you know that construction is a noisy affair. Well, guess what? It’s the same with woodpecker homes.

As one red-bellied mate-the female, I was to eventually see-called from the upper branches of the tree, the male worked at excavating the nest cavity. Occasionally he’d stick his head out of the hole to drop small bits of wood to the ground, and a couple of times he’d emerge completely, covered in bits of woodchips and dust. He’d call back to her, then go back inside to hack away some more.

After about 10-15 minutes of observation, I decided to scurry back home to get a camera and tripod. As I walked away I noticed the call frequency diminished, which I think was the pair’s way of communicating that the weird human in the rain hat was finally gone and any imminent danger she represented had passed.

But not for long. When I returned with the camera gear, the calls picked up for a bit, with the male actually exiting the hole and giving me what appeared to be a stink eye. A few more minutes of calling ensued, then the female flew to a tree a couple dozen yards away. Soon after, I could hear drumming.

At this point, I should probably digress and mention that drumming, for a woodpecker, is the equivalent of singing among songbirds. It’s used to declare a breeding territory, and both males and females do it. Calls, on the other hand, serve to provide other types of helpful messages like “Here I am! Over here!” or, “Look out!” (the avian equivalent of “Danger Will Robinson!”) or even “Hey, back off!” if another member of the species comes too near.

With the tripod set up a respectable distance away, I trained the camera lens on the hole, zoomed in, and videoed a few minutes of the male at work. I stood very still so as to not seem threatening, but did adjust my gaze from time to time to check out the tree itself.

As is typical of most of the Norway maples in the area, the main stem appeared to have seen better days. Fungal growth on the bark indicated trouble underneath, a sign that’s bad for the tree but good for the woodpeckers. Diseased wood makes for easier excavating and more insects, which are the birds’ primary food source.

I also realized that this was not the first time woodpeckers had moved into this particular tree. A foot or so above where the male red belly industriously dug away, I noticed another woodpecker hole. This one looked older and larger, as if maybe a squirrel had chewed around the edges to customize the cavity for its own use.

After about 15 minutes of recording, interspersed with some casual conversation (from several feet away) with some other folks enjoying the fresh air, I packed up and headed for my next destination: the other end of the block.

Do we naturalists know how to travel, or what?

Next week I’ll fill you in on the subject of that little excursion-a most unusual visitor indeed! In the meantime, wash your hands, stay well and keep a positive outlook toward the future. A lot of Good Nature lies ahead!