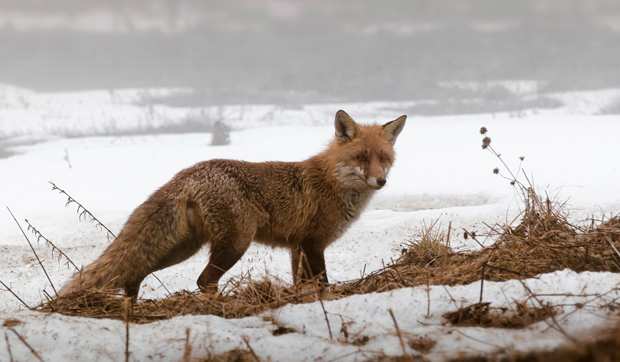 The red fox, Vulpes vulpes, plays the role of mesocarnivore in a variety of habitats across northern Illinois.

I’ll be the first to admit, I’m not a Shakespeare scholar. In fact, in high school I had but one brush with the Bard (a miserable group project rewriting Romeo and Juliet in urban slang) and I managed to dodge him completely in college.

While I still have trouble fully appreciating his many great plays and poems, select phrases from William Shakespeare’s wondrous works are nonetheless embedded in my brain. I swear, every time I find a raccoon skeleton-which happens more  often than you’d think-I’ll hold the skull at eye level and assert, “Alas, poor Yorick! I knew him, Horatio…”

Then there’s “To be or not to be…” and “To sleep, perchance to dream.” And the impetus for today’s discourse, “All the world’s a stage…”

(I wish I could say I’ve read As You Like It, but honestly all I know about the quote I derived from our high school yearbook committee, which used the words as its theme our sophomore year. “Act One, Scene One: Fall Football.” You get the picture.)

If we look at our natural world’s stage right now, two major players are dominating many of the scenes in northern Illinois: coyotes and great horned owls. Both are in the midst of their breeding cycles, with the former patrolling their territories in highly visible ways and the latter incubating eggs that will be hungry hatchlings sooner rather than later.

But if we peer beyond these center-stage stars, we see there is equally important business being conducted by two diminutive but dynamic groups that serve as a strong supporting cast: red foxes and eastern screech owls. Red foxes are on the same general breeding schedule as coyotes and screech owls, while not nesting until April, are finding refuge in tree cavities, owl boxes and other assorted nooks.

A top priority for both species-given that they are targets for their larger brethren-is stayin’ alive. (Random and somewhat relevant fact: A few years before they hit the disco charts, the BeeGees recorded a song called Method to My Madness, based on a line from Shakespeare’s Hamlet: “Though this be madness, yet there is method in’t.”)

Over the past two or three weeks here at Good Natured World Headquarters, our email inbox has received numerous reports of red foxes being seen at all times of day and night. A few correspondents expressed concern that the animals were active at times when “they should be sleeping,” but while a sighting in the middle of the day is unusual, it doesn’t mean the animal is ill.

Even though we think of them as nocturnal, red foxes often are described as being crepuscular, which means they are most active at dawn and dusk. But if the voles are busily tunneling under the snow at high noon (as they often are when temperatures are particularly cold) and a fox is hungry, there’s no reason why it wouldn’t go plunging after them in the bright mid-day sun.

However in areas where humans are the dominant mammals, red foxes will often confine their movements to the overnight hours-the time when they’re least likely to encounter us raucous bipeds. Garbage night in particular is a good time to look for foxes in action, if you’re so inclined. These animals don’t eat trash per se, but the cacophony of smells that accompany all those bins rolled out to all those curbs is hard to resist for foxes-and just about every other form of suburban wildlife.

Also present in those emails of concern was the question of whether foxes present any danger to cats, dogs or kids. (Interestingly enough, that was the stated order of concern too.)

Vulpes vulpes falls under the classification of meso-, or medium-sized, carnivore. In Illinois red foxes measure about 3 ft. in length, including their long, fluffy tail, and weigh 7-18 lbs. So we’re not talking huge here. In fact, as a means of comparison my cat Jimmy weighs 16 lbs.; any fox foolhardy enough to mess with him would get what it deserved (from him and me both, as Jimmy’s a strictly indoor cat).

Despite carn- meaning meat-eating, the fox diet can vary quite a bit from season to season. In winter it will include small rodents, rabbits and even chickens-if the henhouse door is left ajar. In summer and fall when berries, plums, apples and other fruits become available, these items are added to the menu along with other seasonally variable items like eggs and fresh carrion. Note that neither dogs nor kids make the list; Jimmy-sized cats don’t either. Unattended kittens and small adult cats might though, and for this reason among others it’s best that felines be inside pets.

Let’s see, where were we? Ah yes, all the natural world’s a stage. Yet we’re out of space, with screech owls still to make their entrance. We’ll take a brief intermission now, and reconvene next week for Act II and a look at tiny but mighty Megascops asio.