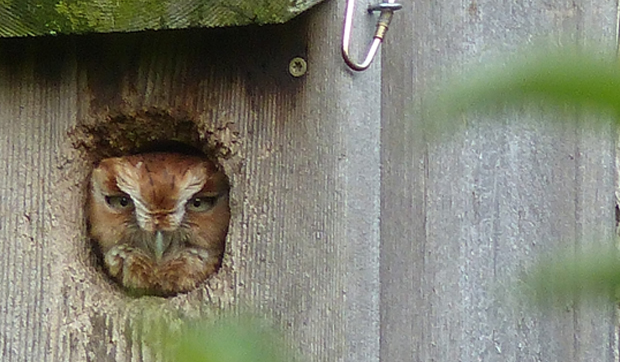 So last week we ventured into unfamiliar territory, melding nature references with quotes from William Shakespeare-primarily from his play As You Like It, and the monologue that begins with “All the world’s a stage, and all the men and women merely players…”

We mentioned two lead performers of nature’s winter stage-coyotes and great horned owls-and noted that while these large and dynamic animals garner a lot of attention from January through March, we actually have a couple other cast members that are rocking their roles as well-albeit in more inconspicuous fashion. One is the red fox, which we covered in detail, and the other is this week’s star: the eastern screech owl.

Weighing roughly 1/10th as much as its scene-stealing counterpart, the eastern screech owl is sometimes mistakenly called a baby great horned owl. It has feather “horns” atop its head and yellow, owlish eyes. But as we learned way back in Good Natured 101, all birds old enough to fly-even if they just recently fledged-are the same size as their parents.

Fully grown, an eastern screech measures a little over 6 in. tall (for males) to over 9 in. tall (for females) and tips the scales between 4 oz. and 8 1/2 oz. Before you get too flabbergasted by the screech’s lack of bulk, keep in mind that as a bird it really can’t weigh very much or it won’t be able to fly. Its feathers are literal fluff and its bones are hollow. In fact even a female great horned-the largest owl in North America-peaks at around 5 1/2 lbs., or a little bit more than a sack of flour.

It may be small, but the eastern screech is mighty good at what it does. A generalist predator-another way of saying it’s not picky-this bird will feed on a wide range of invertebrates (mostly insects but crayfish too where they’re available) as well as tadpoles, frogs, rabbits, rodents and birds.

They’re even agile enough to grab the occasional bat. I remember following some wildlife biologists on a tour of bat habitats in abandoned mines in southern Illinois. As we stepped inside the first mine one of the scientists casually pointed to some headless bat carcasses on the ground and offered a two-word explanation: “Screech owls.”

We don’t typically see signs of such vigorous feedings in our area, save for the occasional pile of cast pellets near a favorite roost. I’ve got a small collection of them from a long-ago winter when a screech owl took shelter near a park district building. I swear, if not for these jelly bean-sized mementos, I wouldn’t even have known the bird was there despite passing it frequently.

It’s this sort of subtlety that’s one of the keys to the screech owl’s survival. During daylight hours they rarely advertise their presence; to do so might invite attention, which is most unwanted. Many animals, including hawks and larger owls, consider these pint-sized predators as prey; meanwhile blue jays and crows consider them threats and will gang up around them, jeering and cawing, in a behavior called mobbing.

So it is that a screech owl will sit, nearly motionless, for hours at a time. Against the bark of a tree the bird virtually blends in thanks to exquisite patterns of either gray or rusty red, or rufous.

But then when night comes-and not just sunset, but actual darkness-a switch flips and these little owls come to life.  They forage, they feed and, when the mood strikes, they sing. Both males and females vocalize and, let me tell you, there’s no mistaking their distinctive songs.

One, known as the whinny, starts off high pitched and then descends in tone, like a tiny horse neighing. Another, known as the tremolo, is a single note trilled as long as 6 seconds at a time.

Neither, by the way, are screechy. According to the Cornell Lab of Ornithology, the whinny is used to defend territories while the tremolo is used as communication between mates or family members.

These sounds might be your first, and perhaps only, clue that you have a screech owl living nearby. “You’re going to think I’m making this up but I’m not,” says Peggy Cain, of St. Charles Township. “The first time I heard a screech owl in my neighborhood was 3 a.m. on September 3, 2011. I know this because we attended our niece’s wedding later that day. I slept with the windows open that night and awoke to the whinny of the screech owl–though I didn’t realize it at the time.”

She and her husband Tom have heard the owls every year since, and have encouraged their presence by building and installing screech owl boxes. They caught a glimpse of a gray individual in March of 2017. This winter, a red screech owl is occupying their new box. “I was so excited when I finally got to SEE one,” she says. “Hearing doesn’t count in my backyard bird book log, so I’m happy to be able to check that box. Simple pleasures in a Covid world.”

At the end of As You Like It, the character Rosalind states that “a good play needs no epilogue,” but then goes on to deliver one. Well, you know what? A good screech owl story doesn’t need one either. But we have lots more to share. Watch this space in the coming weeks for more news about screech owls in northern Illinois.