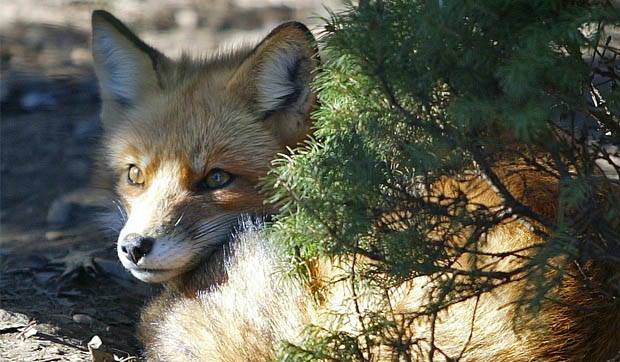 As coyotes have come to proliferate throughout our area, red foxes have increasingly moved into neighborhoods where man-made features offer protection and shelter. (Photo credit: matthew_hull at MorgueFile.com)

The snow swirled down in big, heavy flakes-like the kind you see in a snow globe, only real. As I walked through the Hickory Knolls Natural Area, I couldn’t help but become immersed in the tranquility of nature in winter.

A stroll in the woods is one of the best ways I know to clear my head, and that particular day I surrendered to the free association of words that lilted through my tired brain.

Peace. Serenity. Calm. I could feel my body relaxing with each additional step, even as I had to maneuver around several sizable coyote scats.

Rounding a corner marked by a particularly stalwart oak, the word stream continued. Degraded. Amended. Restored. This particular area, once a sea of nonnative buckthorn and Hungarian brome grass, now is home to American hazelnuts and a host of natives like prairie dropseed, sand coreopsis and little bluestem.

Now, don’t get me wrong. The amount of ecological restoration that has occurred in this particular part of the natural area is impressive indeed. But fox scat? In that location? Jeepers! I couldn’t believe my eyes.

You see, over the past several years, coyotes have come to be the dominant wild canid in the Hickory Knolls Natural Area. The red foxes that once lived there had some time ago read the writing on the wall-that the coyotes were playing for keeps-and ceded the territory to their larger cousins.

After the foxes moved out, we’d occasionally notice fox scent around the nature center. But their presence in the untamed natural area was negligible. Instead, they sought refuge in locations where they felt safe-namely the neighborhoods across Campton Hills Road, which offer sheltering niceties like evergreens, ground covers and thick shrubs, as well as sheds, decks and porches.

But as I stared at the scat-which, I should add, looked quite fresh amid the light snowcover – I started thinking back to all the instances this past fall where we caught whiffs of fox urine as we went about our outdoor teaching duties in the natural area.

(Side note: When we hand out awards for Stinkiest Mammal, skunks of course always take top honors. But red foxes are a close second. Their scent glands produce distinctive aromas and their urine is pungent-vaguely skunk-like, but with a sweeter bouquet. My gosh, I sound like a urine sommelier.)

At any rate, as I studied the newfound scat, which looked like two dark, twisted pinky fingers there on the trail, I began to connect the dots between events that had occurred over the past several weeks. Besides the fox scent we’d detected in September and October, I found fox tracks and scat by the nature center on Friday October 19. Then, on Sunday October 21, I received notice of a red fox, quite dead, on a soccer field a hundred yards or so from where I’d noted the tracks.

On Wednesday November 21, I received a call about another dead fox, this one on Water Tower Hill in the natural area. It was, in the words of the caller, “kinda beat up.” I’d wondered at the time whether coyotes had played a role in its demise, but in the rush of the Thanksgiving holiday period I failed to go over and check it out myself.

Looking back, I lamented my decision to go home and bake instead of heading out to look at the carcass. Darn. Rats. Phooey!

In light of all these signs – the scent marking, the scat, the mounting body count – I decided to retrace my steps back through the natural area and reinspect some of those coyote scats I’d sidestepped earlier. My thought was that if the foxes are trying to expand their turf, they’d be marking with scat too.

And, sure enough, though not as plenteous as those left by coyotes, fox scat did appear in a couple of spots along our main trail. In fact in one instance the two were so close together I had mistaken them as both belonging to a single coyote deposit.

(Side note two: At this point my brain, no longer tired, started re-creating the drama that must have occurred at that point on the path. Fox: “This trail junction is the perfect place to leave my mark. I hereby claim this spot for Team Vulpes!” Coyote, later, with The Ride of the Valkyries crescendoing the background: “Not so fast, Fox!” Plop.)

By this time the snow flurry had stopped and the light was beginning to fade from the cloudy sky. Energized by the prospect of canine activities and curious about their outcome, I headed back to the office with a renewed sense of the wonders of nature. I’ve no doubt I’ll be streaming more words this winter as this engaging drama plays out.