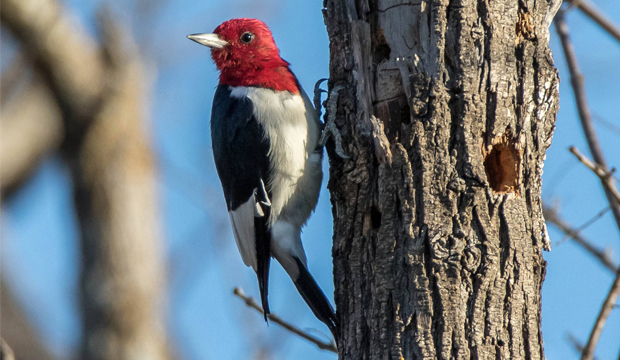 Many woodpeckers are referred to as redheads, but there’s only one species that truly earns the title: Melanerpes erythrocephalus, the unmistakable red-headed woodpecker.

What’s black and white and red all over? Here in the TriCities’ corner of the natural world, not a lot. But the red-headed woodpecker is one notable exception.

Most of the Picidae family members in our area (downy, hairy, red-bellied, northern flicker and, lately, pileated) feature a splish or splash of red-especially the males. In fact, the red-bellied woodpecker is often called red-headed thanks to its goodly portion of orangish-red.

But once you see a true red-head, you’ll see exactly why it claims the title. Both males and females look as though they’ve been dunked in a bucket of crimson dye. The head and neck are completely red, while the rest of the body is boldly marked with big blocks of black and white-black on the back and tail, white on the chest, secondary wing feathers and rump.

They’re the sort of markings that birders consider “unmistakable”-which is good news for those of us who find ID mistakes easy to make. But the somewhat more sobering news is that, even though the red-headed is instantly recognizable, few people here ever see them.

Although they’re not listed as threatened or endangered in Illinois, red-headed woodpeckers are a species in decline. Periodic fluctuations in population aren’t that unusual and in fact are a natural part of life on earth. But the red-heads’ downward trend has continued for more than 50 years. According to the North American Breeding Bird Survey, red-headed numbers have dropped 70% since 1966.

Our own Kane County Audubon statistics back up this trend. In 1972, the first year a Spring Bird Count was held here, birders counted 121 red-headed woodpeckers, an all-time high for this species. The species hit an all-time low in 2007, when birders counted only three. During the 2019 SBC, six redheads were recorded-not exactly a strong comeback, but not a reversal either.

Earlier research indicated that competition with European starlings for cavity nesting sites was to blame. However, more recent studies show that starlings tend to nest earlier than red-heads, so their role may have been exaggerated. Another issue of perhaps greater importance is habitat destruction, including the removal of dead trees.

It’s true that by our human standards, dead trees have little or no value. If they’re not too decayed they might be used for firewood, but mostly they’re simply cut down and hauled away, lest they become safety hazards.

But in natural areas, dead trees are Taj Mahals for countless numbers of critters large and small. While insects and other decomposers are munching away on the inside, recycling the tree’s components back into rich, nourishing soil, excavators like woodpeckers are pounding away on the outside. The cavities they create start out as homes for the birds themselves, but once they’ve moved on, any number of other creatures both feathered and furred may move in.

Besides liking dead trees, or at least dead branches within living trees, some red-headed woodpeckers also show a preference for areas where those trees are widely spaced. Ecologists refer to this type of ecosystem as a savanna, but you might be more familiar with the term grove. Either way, the tree canopy covers no more than 50% of the space; trees are 10 or more yards apart; and the herbaceous growth below includes prairie plants and forbs, or flowers.

It’s hard to find a quality oak savanna these days. The oak trees at Bluff Spring Fen in Elgin come to mind, as do the old oaks growing at McCullough Park in Aurora.

In fact it was this latter site where I once saw not just one red-headed woodpecker, or two, but a whole family-Mom, Pop and Junior. True, the plant community underneath the trees at this park, which is adjacent to the Prisco Community Center, is mowed turfgrass rather than prairie. But the tree spacing is right, and apparently there were just enough dead branches-and nutritious insects–to support this striking clan.

I will always remember watching Mom and Dad teaching their little one (whose head was brown; the red doesn’t appear til Year Two) how to pound open what looked like an acorn. Instead of an oak tree, though, their life-skills classroom was a telephone pole-which, when you think about it, is dead wood, and widely spaced.

The next time you pass by what looks like “just a dead tree,” give it another look. Chances are good you’ll find evidence of woodpecker activity. But look a little closer…you might see some black and white and red. They won’t be all over, but one or two red-heads would be good news indeed.