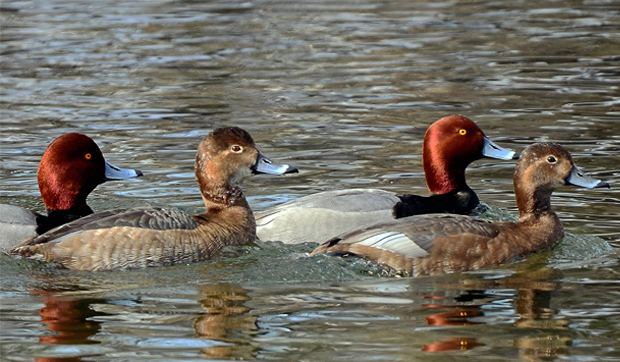 Photo Caption: A true sign of spring: Redhead ducks are making their way toward their breeding grounds in the northern Great Plains.

Last week we took a look at the American robin, a bird regarded as a sign of spring but-confoundingly-has been popping up all over northern Illinois all winter long. This week though we’re focusing on a species that maybe, just maybe, provides a little truer prediction that our seasons are changing. That’s right, we’re looking at redheads.

I know, it sounds weird. But just for today, set aside your pop-culture interpretations of the word-your Lucille Ball, your Prince Harry, your Little Mermaid-and get ready to meet one really wild redhead: Aythya Americana, that is, the redhead duck.

Redheads are named for the distinctive coloration of the male’s head, which in bright sunlight is a close match to Ms. Ball’s fiery locks. Other distinguishing characteristics are yellow eyes, a blue-gray bill with a black tip, and grayish body and wings. These features help distinguish redheads from the canvasback, another species with males that have reddish heads. The canvasback hue, though, is darker, more like Judy Garland in the Wizard of Oz, and that duck’s bill is dark.

But what makes redheads-the ducks-so fascinating to me is the one-two punch of a) their relative rarity in our area and b) their curious approach to reproduction.

Redheads typically show up in our area as the cold weather is waning. They are a species that overwinters across the southern United States and breeds primarily in the prairie pothole region of the upper Midwest. A few individuals use the Fox River Valley as a stopover on their north by northwest journey, and seeing them is a sure sign that spring is on its way.

I saw a male and two females paddling along the river on Tuesday, and that got me into redhead mode. It also got me thinking about what lies ahead for them. They have miles to go, and they-the females, anyway-have some decisions to make.

After arriving at the breeding grounds, Mama Redhead (who, by the way, is mostly brown, with a dark-tipped bill) will size up the situation. What is the condition of the cover, or the grasses and rushes, in which she will make her home? How is the water level? How much food is available? How are the neighbors? She’ll also take stock of her own qualities, namely her age and whether her fat reserves are in good shape. (Being able to pinch an inch is a good thing, when you’re a duck in breeding season.)

After assessing the situation, she will proceed with one of several breeding strategies. If food and cover are plentiful, she may go ahead and make her own nest, lay her own eggs, incubate them and then raise her own young. But if any of those requirements are lacking, she likely will alter her approach and either lay some eggs in her own nest and some at the neighbors; lay all of her eggs in neighboring nests; or lay no eggs at all.

That last option is the least attractive, since the name of the game is passing genes along. But some of those other alternatives-known as brood parasitism-make redheads fascinating indeed.

The intrigue lies not so much in that they may decide to drop eggs in other ducks’ nests-actually many duck species do that, including wood ducks, goldeneyes, buffleheads, mergansers and ruddy ducks. But these species typically are intraspecific brood parasites-they seek out nests made by members of their own species.

Redheads, however, are unique in that they are highly adaptive. They not only will lay eggs in other redhead nests, but also in the nests of other species-especially canvasbacks, but also mallards, scaups, gadwalls…basically, whatever ducky home that might be handy.

Typically, Mom Redhead will wait until a nest is unattended, then waddle over and drop her future duckling off. But sometimes female redheads will take a more forceful approach, pushing their way in, and under, another nesting female. With the resident female dislodged, the redhead becomes queen of the hill, at least for a few minutes. Which, as it turns out, is all the time she needs to lay an egg, then leave.

If you’re as into redheads as I am, now is the time to get out and see them. The Fox River downstream of downtown St. Charles is good, and the pedestrian bridge south of the Illinois bridge and the overlook at Mount St. Mary Park offer particularly nice viewing opportunities.

Redheads dive when feeding, but also dabble for food along the water’s surface, so I’m sure there are lots of other good spots too. Look for areas where waterfowl gather, then look closely at each bird; species tend to mingle at this time of year.

Just be sure to practice appropriate protocol. As a migratory species, redheads are a little more wary than our resident mallards and Canada geese. Move slowly and quietly, and chances are good you’ll be rewarded with a look at this grand species-handsome in its own right, but also a sign that spring is just around the corner.