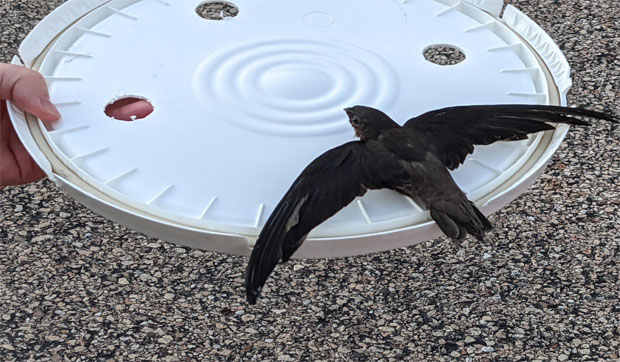 This fledgling chimney swift was among a group of seven rescued swifts that recently joined a Geneva, IL, flock.  Soon these birds and thousands of others will head to South America for the winter, returning next spring.

People head to downtown Geneva, IL, for all sorts of reasons. The town’s unique boutiques offer diverse shopping options; its many restaurants provide all manner of food and drink.

And then there are the chimney swifts.

For nature nerds, even if the main reason we’re in Geneva involves shopping or eating and drinking, we’re keeping one eye to the sky, looking (and listening) for Chaetura pelagica. From April to September we glance hopefully skyward, listening for the familiar twitter and hoping for a glimpse of the dark-colored, insectivorous darlings-the “flying cigars” we know and love.

Geneva, like so many towns in our area, is blessed with a number of older buildings that have uncapped and unlined chimneys. These structures resemble the swifts’ ancestral homes-hollow trees-and at one time were plentiful. Today though most are lined and capped, so the swifts have fewer places to call Home Sweet Home each summer.

This lack of suitable habitat means that the swift populations in our area tend to be concentrated around those old chimneys.

It also means that when you find yourself with seven orphaned chimney swift babies, that you’ve raised from nestling size without, amazingly, losing a single one, you head to downtown Geneva for their release.

That, in a nutshell, or, actually, a little white swift-sized eggshell, is what happened a couple weeks ago when Ashley Kendall, director of wildlife at Anderson Humane in South Elgin, emailed Good Natured World Headquarters inquiring about active chimney swift roosts. “We have 7 swifts ready for release,” she wrote, “and ideally would release them into a flock!”

That exciting news triggered a series of texts with Marion Miller, our local swift advocate who, along with her husband Rich, has been educating people about the birds at every opportunity for a decade or more. We weighed the pros and cons of known roosts throughout the TriCities but when Jon Duerr, another swift aficionado, turned in a report of a Geneva roost 150 birds strong, the decision was easy.

We made a plan to meet at 8pm, as the swifts generally tuck themselves in about 20 to 30 minutes after sunset. Ashley Kendall and I got there about the same time and met Marion and Rich, and soon were joined by Anderson’s Ashley Cusimano and Ralph Buonavita. Then another vehicle arrived and out popped Alex Schwander, also from Anderson, carrying a 5-gallon bucket.

From a distance the plastic container looked like any other bucket of that size, but as Alex approached we could see it was lined with a pillow case, and fitted with a lid with several 1-in.-ish holes drilled in it. A single swift peeked daringly out at the wide world it was about to join.
As Alex pulled the top off the rest of us stood ready with cameras and cell phones. The adventurous little one held on tight as Alex lifted the lid away from the bucket–and the six other fledglings.

Overhead the 150+ adult swifts, which Rich had been dutifully monitoring, circled and twittered, twittered and circled, gradually tightening their arcs as they drew nearer to their roost. The little one on the lid cocked its head to one side, looked up and, floof! It took off, its strong wings taking it aloft with rapid-or should I say swift?-strokes. (Fun fact: Chimney swift wingbeats are quite stiff, much like their close relatives the hummingbirds. In the evening as they’re entering their roosts, swifts use their wings to “helicopter” above the entrance and orient their bodies so they enter tail first. They spend the night hanging vertically, heads up, and when morning comes they lift off and fly up and out.)

Seeing these young birds follow their instincts, flying up and into the swirling flock above, was certainly a highlight that night. But you know what the best part was? Seeing the sheer joy on Marion’s face as she was given the chance to hold and release one of the precious little ones.

If you’d like to experience Chimney Swift Joy yourself, check your calendar! On Saturday September 10 and Friday September 16, Marion, Rich and other members of Kane County Audubon will be hosting their annual Chimney Swift Sits…events that celebrate the southward migration of the wondrous winged stogies.

Bring a lawn chair, binoculars if you have them, and maybe a beverage, then sit back and enjoy the show! Locations and other details will be announced on the KCA website, www.kanecountyaudubon.org, as well as the Facebook page Chimney Swifts Over the Fox Valley and Beyond. You can also drop me a line and I’ll be happy to send you the particulars. In the meantime, keep your eyes open for flying cigars!

Pam Otto is the outreach ambassador for the St. Charles Park District. She can be reached at  potto@stcparks.org.