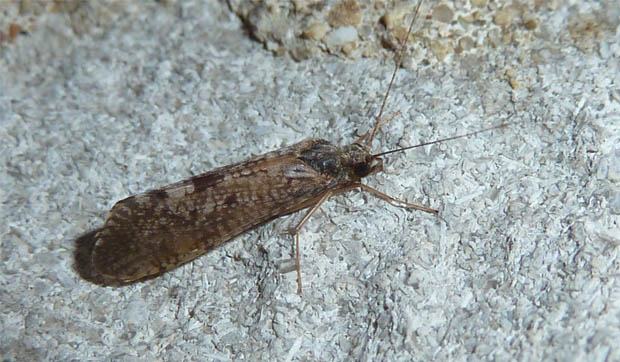 Also known as ‘river bugs’, caddisflies periodically emerge en masse from the Fox River and its tributaries. Their larvae live underwater for up to a year, and frequently are used as indicators of aquatic ecosystem health.

River bugs are back

Lots of people soon will flock to St. Charles’ annual extravaganza, Festival of the Fox. Dragon boats, water skiers, live music and more are among the diverse attractions that will draw crowds out in celebration of the town’s most notable natural feature: the Fox River.

Interestingly, though, I can guarantee that when some of the Fox River’s most plenteous residents show up, not a single person will open their arms to welcome them. Unless you call waving and swatting “open arms.”

That’s right, the River bugs are back. Those little brown bugs that emerge periodically from the depths of the Fox arrived en masse about a week ago, fluttering about downtown St. Charles as well several other communities up and down the watershed.

Small and fuzzy looking, with a tendency to fly toward and into places people find bothersome-namely noses and mouths-River bugs actually are a symbol of what the Festival of the Fox is all about: a thriving riverine ecosystem without which none of us could survive.

River bugs are caddisflies, the insects that make up the order Trichoptera, or “hairy wings.” North America is home to more than 1,300 species of caddisflies, a fact that may come as a surprise to casual river observers but not the legions of fly fishermen who go to great lengths to create lures that replicate the intricacies of the caddis form.

As these sportsmen will confirm, caddisflies are key members of aquatic food chains, feeding fish and other life forms in stream systems around the world. But their allure extends above the water’s surface too. Purple martins, swallows (barn, cliff, bank, tree and rough-winged, to name a few), chimney swifts and night hawks are a few of the birds that partake of summer’s periodic caddisfly feasts. Bats (big brown, little brown and red to, again, name a few) as well as hundreds of species of spiders and other predacious arthropods come flying, scurrying and scuttling in to take advantage of the caddisfly gravy train.

Take away caddisflies and the whole system would come tumbling down. No more first-rate smallmouth bass fishing, or any fishing for that matter, without this key food source. No more fertile streambeds, because the niche of herbivorous scavenger would suddenly be vacated. No more clean water because of the die-off of plants and animals. And without clean water, it’s only a matter of time before there’s no more…us.

No doubt, caddisflies are an essential part of life. But what exactly is a caddisfly anyway?

Caddisflies get their common name from the Middle English word caddice, which means a woolen braid, ribbon, or tape. Way back when, caddice men used to display these wares by pinning them on their coats-much the same way adult caddisflies perch on clothing and other vertical surfaces.

Even though they are by nature aquatic, caddisflies are close relatives of the Lepidopterans, or scaly wings–the critters most people refer to as butterflies and moths. Both orders of insects have a larval phase in their life cycle, and both types of larvae pupate and emerge as winged adults. However, young caddisflies pass the days of their youth in the water, not on land.

The caddisflies that appeared here recently came up out of the Fox River as part of a synchronous “hatch,” or emergence. Millions of newly minted adults came from the water within days of each other, ready to complete the last– and shortest –phase of a life cycle that began about a year ago.

Back then, mated females laid eggs in the water that soon hatched into larvae. Over the ensuing months the young insects grew through four immature stages called instars. Wriggly and green, they looked very much like caterpillars as they clung to submerged rocks and logs and fed on leaf litter and vegetation.

About a month ago, the little larvae spun small silken cocoons-similar to those of their land-dwelling cousins, but underwater-and began their magical transformation from wiggly youngsters into winged adults. Complex cues then prompted them to emerge all at once, a strategy that not only aids survival of the species (predators can eat some, or most, but never all of a synchronous emergence) but also makes it pretty easy to find a mate.

Even with an abundance of options, though, adult caddisflies should best resort to speed dating.  At this point, they’ve got maybe 10 days to two weeks left–just enough time to get down to business and reproduce. As the last adults of this emergence fade away, the new larvae of the next generation will be starting appear, and the cycle will begin again.

This most recent emergence looked to be a type of Hydropsychid caddis, a group whose larvae build “retreats” by gluing bits of sand and plant material onto the sides of underwater rocks. The “glue,” so to speak, actually is a sticky silk produced by glands near the mouth. The larvae then spin “nets” of silk in the water to capture food as it flows past.

That in itself is a pretty nifty trick. But caddis species in other families take it one step further.  These more mobile larvae glue bits of plants, twigs, or pebbles and sand together to produce a tube-like case that they carry around with them.

Caddisflies’ fascinating ways have inspired many who have observed them. Poets pen verses about them; artists create sculptures based on caddis larvae cases. And at least one enterprising entomologist/jeweler has gone into business. Wildscape Inc. (www.wildscape.com) sells earrings, necklaces, bracelets and the like featuring caddis cases made from precious stones.

We’ll likely have more caddisfly emergence before the summer is over. If you’re looking for a little inspiration yourself, head down to the river on the warm summer night and watch for clouds of brown insects around the street lights.

Watch for me, too. I’ll be the one wearing the caddis-case earrings.

(Ed. Note: This column is the first in a series that explores the three major groups of insects that emerge from the Fox River in large groups. Next week: The Ephemeroptera, or mayflies.)