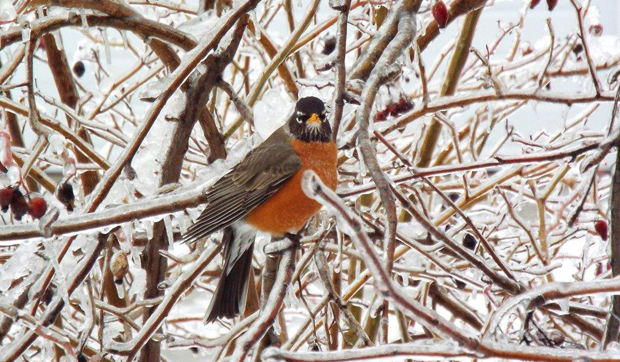 Photo Caption: American robins have long been regarded as a sign of spring. But a robust population and plentiful food choices mean we can see this cheery bird even in winter’s coldest months.

Okay folks, show of hands. How many of you were raised to believe that robins are the first signs of spring? I know I was.

I don’t remember the exact words, or who said them, but I do distinctly recall my five-year-old self looking for robins as winter’s cold would begin to ebb. I also distinctly remember finding them that year, and pretty much every year that I looked. There they’d be, bob-bob-bobbin’ along. “Spring’s here!” we’d exclaim, and life would go on-even if we still had occasion to pull out our parkas, or shovel the driveway.

Now, were the robins there a month or two prior, when “The north wind didst blow, and we shall have gotten snow,” to paraphrase the nursery rhyme? I do remember seeing them a time or two when it was still quite cold out and saying to Mom/Dad/whomever was in earshot that those birds must have gotten their dates mixed up.

So today here we are, riding out some of the coldest weather Mother Nature has thrown at us in at least a couple of years, and what birds might we see flitting amid the trees? Yep. Robins.

There’s no doubt these feathered friends, known also as Turdus migratorius, are enjoying a fair share of success right now. And, as is so often the case, we humans more than a little responsible.

For one thing, through the steps we take to make ourselves comfortable, we also make things easier for robins. We’ve built structures that offer sheltered and predator-proof nesting locations. How many of you have had robins build nests on your porch pillars or outside light fixtures?

A look at Kane County’s Audubon’s Spring Bird Count data confirms that robins are doing very well in our area. So well, in fact, that they rank third in terms of total individuals seen over the survey’s nearly 50-year history. (Coming in at No. 2 is the common grackle and No. 1 is the red-winged blackbird.)

By now you’re probably thinking, “Okay Otto, we get it. Robins are doing well. But why are we seeing so many in winter? Don’t they migrate? Isn’t their return a sign of spring??”

Well, yes and no. If we look at the fabulous dataset housed at ebird.org, which is managed by the Cornell Lab of Ornithology, we see that robins are reported in Illinois all twelve months of the year. Granted, the frequency of sightings jumps as we get into March and April, but even in December and January roughly one in every five lists reported includes American robins.

Well, alrighty then. Looks like we need to dig a little bit further into what makes robins tick.

Besides shelter, they also need food. And there again, humans have gone above and beyond.

Our preference for landscaping with trees and shrub that produce flowers, and therefore fruits, has created a year-round source of food for T. migratorius. True, the image of a robin pulling a worm from the ground is about as iconic as a nature photo can get. But in reality robins consume a diverse diet that varies with season and availability.

I’d wager that all of you who have been seeing robins this winter have seen them in or near fruit-bearing plantings. Crabapple trees. Hawthorns. Sumac. Bittersweet. Honeysuckle. Buckthorn. Roses, with their vitamin C-laden hips. All are readily available in our area and consumed with gusto. (Indeed, some of these plants are introduced and quite invasive. But that’s another story for another time.)

Suet is another option offered at, you guessed it, feeders placed by humans.

To wash down these delicacies, as well as keep their feathers in peak condition, robins need a source of water. Once again, we’ve have come through on both large and small scales. We’ve built dams that keep water open and flowing on their downstream sides, and we’ve placed heaters in our birdbaths. Check! Another vital requirement met.

A few other things to keep in mind as you observe robins amid the snow and cold:

I know, it’s hard to give up the idea that robins signal that spring has arrived. If you’re a diehard robin fan, and I know there are a lot of you out there, all you need to do is modify your technique just a bit. Instead of using only your eyes to spot robins, use your ears too, to listen to their sounds. If all you hear is cheeps and chatters, you’re observing standard flock communication, which means the birds are still in winter mode. But if you see an individual by himself, and he’s belting out a hearty “Cheery-up, cheerio,” you’ll know you’ve found a bird that’s declaring his territory. He’s getting ready for the coming breeding season–the time of year you and I call spring.