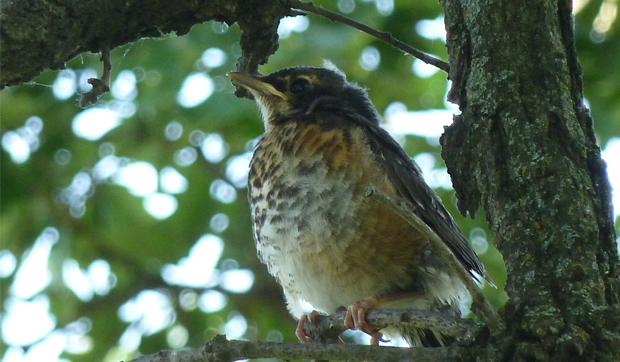 Those were the words I uttered a few days ago when I stepped outside my office to take the picture for this week’s column.

High above our service entrance, at the back of Hickory Knolls, a robin’s nest still sat among the supports of our solar energy, panels. My intent this week was to write about the little family that was living up there. About how the home Mom Robin had made for her family was not only weatherproof but also virtually predator proof, thus supporting a hypothesis I was going to share.

But as I stood below the PV panels, gazing upward, all I could see was a quiet, and quite empty, nest.

What a change from last week, when the youngsters inside were pushing the limits of the grass-and-mud structure. Two, maybe three, chicks were clustered there, their growing bodies testing both the capacity and strength of the house that Mama built. When she, or dad, would fly in with a beakful of squirming goodies, the little ones would open wide–their own yellow-lined bills making a perfect target for Mom and Pop to aim at.

But now, nothing. Was I going to have to set my hypothesis aside and move to a back-up topic, like ant pupae? Lucky for you…heck no!

I don’t know if you’ve noticed, but American robins seem to be thriving in our region. Data collected by the birders of Kane County Audubon would appear to bear this out. According to KCA’s Spring Bird Count spreadsheet, birders counted 463 Turdus migratorius, or American robins, in 1972, the first year the count was conducted here. This year, the number was 962, which thanks to our variable weather patterns actually seems kinda low. Some years the robins have numbered more than 1,700.

My theory-and really that’s all it is, at this point-is that American robins are one of a growing handful of species that are figuring out how to dwell, very well, in the midst of our suburban sprawl.

How many times in recent years have you seen a robin nesting somewhere on a human-made structure? Porch support posts are common sites, as are the horizontal portions of downspouts, just below the eaves on houses. I’ve also seen robins in pole barns, sheds and garages.

Picture the protection a building offers to birds like robins. A well-placed nest can shielded from snow, rain and wind, not to mention raiders like raccoons. Such security must surely contribute to higher nesting success, don’t you think?

I also believe our landscaping choices have helped make life easier for our red-breasted friends. How many of you have honeysuckle bushes or crabapple trees in or near your yard? These prodigious bloomers provide plentiful fruit for robins to feed on, and the supply lasts well into the cold-weather months. Such abundance lessens the need to migrate (robins can tolerate cold temperatures, as long as there’s enough food to fuel their internal furnace) and fewer/shorter migrations mean less migration-related mortality.

With all that said, it doesn’t mean every nest that’s built is a guaranteed success. The laws of nature still apply. Here at Hickory Knolls, we’ve had at least five separate nesting attempts on our building.  One blew down in storm, another got tugged down by a hawk, and two were abandoned for reasons only the robins know.

But the robins that set up shop underneath the solar panels were, I thought, destined to triumph. So when I didn’t see, or hear, the little family the other day I was at first disappointed-hence the “Aw crud.” Maybe my hypothesis had no merit after all.

As I stood there, scanning the ground for evidence of what may have happened to the brood, I heard the excited chirps of-yep-an adult robin, coaching/scolding/warning its young. Could it be…?

I followed my ears to the oak savanna that stands about 100 feet from our solar array. Sure enough, there was Mom and Dad Robin, clearly annoyed that I’d arrived on the scene, and-o happy day-a baby robin too!

Though some of its down was still visible, Mom and Dad’s little bundle of joy had sprouted big-bird feathers and managed to flutter up into the protective branches of a bur oak tree. Its delicate feet clung to a short twig as it struggled to hold on despite the strong breeze that was blowing.

As the parents upped their scolding efforts, and the baby tried oh-so-desperately to be invisible, I snapped a couple of pics and walked quietly away.

Back inside, looking at the results, I smiled at what I’ll take as proof that maybe there’s something to my theory. The pictures were indeed worth a thousand words, leaving me-and probably you as well–with only two: