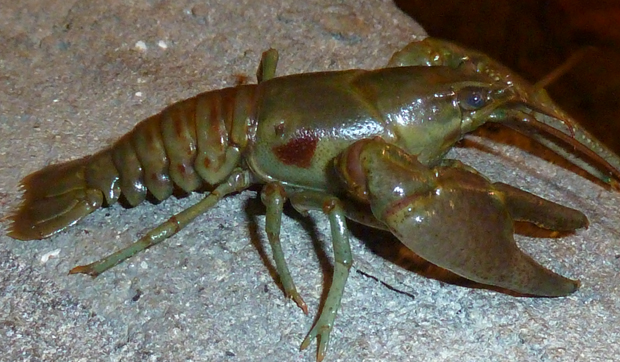 Photo Caption: Rusty crayfish can be identified by two dark, rusty-red spots, one on either side of the carapace. No other crayfish species has these distinctive marks.

Did you ever have one of those days where you’ve found yourself feeling a little, well, rusty?

I have, more than I care to think of.  In fact, I’d wager that I’ve felt a little rusty just about every day over these past few weeks; worse, I don’t see the trend stopping, not next week or even next month.

It’s true, some of that rusty feeling might be an after-effect of our recent pandemic. Rather than delivering outreach programs in person, I’ve been presenting online for close to a year. The upside of that style of presentation is that there’s no travel time and very little setup; I’d just power up my laptop and off we’d go. The downside is that I’m a little out of practice when it comes to speaking on site, to real, live audiences.

Some skills, like projecting my voice, have come back nicely. And I’m working on some of the finer points, like remembering to swap shorts and flip-flops for actual pants and shoes. But I’m not too worried about those details; with a little repetition they’ll be second nature in no time.

Nope, the biggest reason I’ve been feeling rusty these days is…

Case in point: A couple weeks ago I waded into Ferson Creek in St. Charles and, armed with my trusty dipnet, flushed rusty after rusty from beneath various rocks and logs. Plucking them from the net and placing them in a streamside dishpan, I felt a little rusty, which measured around 1 1/2 in. in length; I also felt several big rusties whose claws alone were that long.

Marked with a reddish, or “rusty” spot of pigment on either side of the carapace, the little devils were easy to identify; yet it was hard to accept that they were the only species I could find.

O. rusticus, which normally lives in the Ohio River watershed, first appeared in Illinois in 1973 when unknown anglers emptied their bait buckets into Peoria Lake on the Illinois River. Subsequent accidental releases combined with the species’ own aggressive tendencies have led to robust rusty crayfish populations in waterways throughout northern Illinois.

Now you might be inclined to think, “Gee, Ohio isn’t that far away. How could a species “Made in America” be a problem just a few hundred miles from its native range?”

Short and sweet, rusty crayfish are thugs. They’re the bully on the playground and the obnoxious party guest that won’t go home, all rolled into one hard-shelled, pincer-waving package.

Rusty crayfish eat more, grow faster and reproduce more rapidly than any of our native Illinois species. When threatened, they often rear up and raise their claws, in a fine “You want a piece of me?” display. Confronted with such a hostile posture, most fish and even some turtles will back down and head off in search of more easily subdued prey.

What’s more, rusties are messy eaters. When they feed on aquatic plants-items that also happen to be on the menu of our native crayfish, plus many other critters-they don’t just nibble daintily. Nope. Rusties rip the plants up by the roots, eat their fill and leave the rest to rot. This sort of strategy not only ruins the food source for other plant eaters, but also changes the habitat itself. Less aquatic-plant cover means fewer hiding places for insects and small fish, and less stabilization of stream or pond’s substrate, which in turn leads to greater erosion, increased siltation and further degradation of the habitat.

I’d love to be able to say that there’s an easy fix for this rusty problem in our water. But, as is the case with so many introduced species, there’s no clear-cut solution. There are, however, steps you can take to help curtail the rusties’ spread:

Review these tips as needed, and feel free to contact me with any questions you might have. Because the last thing we want is for you to let you your crayfish management skills to get, well… rusty.