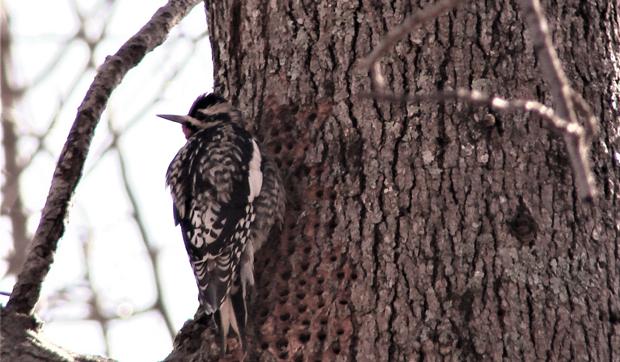 Photo Caption: The yellow-bellied sapsucker can be distinguished from other local woodpeckers by the vertical white patch on the folded wing. Bellies vary from creamy yellow to nearly white but are flecked with gray along the edges. The sapwells, dug in neat rows, also help identify this springtime visitor. (Photo courtesy of mrmac04 on morguefile.com)

Spring starts a week from today and with it comes the promise of warmer temperatures, as well as visits from a host of migrating birds–including yellow-bellied sapsuckers. Please enjoy this column, which first ran in April 2010.

My dad was a big fan of the 1950s sitcom The Honeymooners. (So big a fan, in fact, that when he began seeing my mom, he made it clear that their Saturday night dates wouldn’t begin until after the show was over.) It follows then that, by association – and maybe genetics – I too am a big “Honeymooners” fan.

Every episode was a classic. With plot lines involving the Raccoon Lodge, Chef of the Future, Kram-Mar’s Delicious Mystery Appetizer and Captain Video, how could you go wrong?

I could go on and on but – lucky for you – just one scene in particular is on my mind at the moment. It’s the one where Ed Norton (“Norton!”) is telling his buddy Ralph Kramden about his birdwatching adventures. He mentions that he’d seen a yellow-bellied sapsucker in Central Park. Doubtful, Ralph asks Norton how he knew what it was, and Norton replies, “Cuz it had a yellow belly. And it was suckin’ sap!”

With that said – guess what kind of bird flew into town this week?

Sitting at my desk last Saturday at the Pottawatomie Community Center, I was looking out the window when I noticed a pair of very active birds hopping up the side of a Kentucky coffee tree.

The first thought to enter my head was the basic ID, “Woodpeckers.” Then, slowly, a second thought bubbled up: “Those aren’t just any woodpeckers. Those are sapuckers!”

Could it be? Sure, yellow-bellied sapsuckers – members of the Picidae, or woodpecker family – are seen in our area as they migrate through. But it had been probably three years since I’d seen one. Nonetheless, there they were, a male and a female, flitting around Pottawatomie’s Native Plant Garden.

Despite their name, and Ed Norton’s masterful description, these bi ds’ bellies were streaked and cream-colored, not overtly yellow. And they weren’t “suckin’ sap” – they were eating insects. So I had to look at other characteristics to help make the ID.

Downy and hairy woodpeckers, two of our more common year-round species, have black and white coloration similar to the sapsuckers’, but sapsuckers have a distinctive white stripe along the length of their folded wings. In addition, while male downies and hairies have a dash of red across the backs of their heads, sapsuckers have more red, and in more places.

Using binoculars, I was able to see that one bird – the male – had red across the top of his head, an area called the crown, as well as a red patch on his throat. The female had a similar red cap but lacked the matching throat patch. Also, as is fitting of birds that “suck sap” for a living, both sexes sport a “bib”-a patch of dark feathers beneath their throats.

This ability to tap for sap benefits not only the sapsuckers, but also many other animals not so lucky to have a pickax for a mouth. Hummingbirds are known to lap from sapsuckers’ sapwells, as are chipmunks, squirrels and bats. Insects, too, take advantage of the free sugar and sometimes also become prey to other hungry visitors.

In the past when I’ve seen yellow-bellied sapsuckers in our area, I was able to go to the trees they’d visited and find their telltale marks: horizontal rows of shallow holes dripping watery sap. But the Pottawatomie birds left no such sign. They seemed focused on the bark of the maples, oaks and hickories they visited, perhaps gleaning insects, spiders and other creepy crawlies from among the crevices.

They also seemed focused on each other. When one flew, the other followed, almost as if their movements had been choreographed.

Usually such behavior means courtship, and maybe that was the case here. But yellow-bellied sapsuckers don’t breed in our area; they prefer forests to the west and north, with a range that extends through northern Canada and into Alaska.

I don’t know how long our local sapsuckers will stay, so be sure to remain extra vigilant if you want to try and spot one. When you see a woodpecker, look carefully at its coloring. And remember, it doesn’t have to have a bright yellow belly, nor be suckin’ sap, to be a yellow-bellied sapsucker.