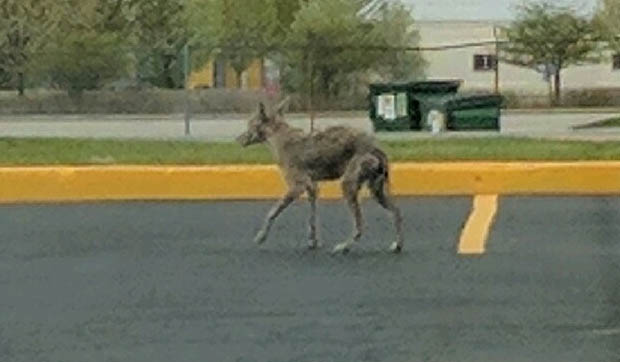 Afflicted with sarcoptic mange, this coyote recently was spotted in broad daylight near Randall Road in St. Charles.

Itchy and Scratchy. They’re more than just cartoon characters on television’s The Simpsons. They’re also the way a number of St. Charles coyotes are feeling these days.

Unlike the TV version, what these animals are going through is no laughing matter. Their itches, which induce scratches, are caused by a pernicious ectoparasite Sarcoptes scabiei.  This burrowing mite can infect many types of animals but in our area, coyotes, foxes and squirrels seem to be the most common carriers.

Sarcoptic mange mites are very common, and in fact in healthy animals cause little more than itching and scratching. But in animals whose health is compromised, say by heartworm or poor diet, the infestation can grow unchecked. Scratching the interminable itch can lead to secondary infections and often, leathery, furless skin. This carries greater consequences in winter, when warm fur is most needed, but can also lead to death from hypothermia during the type of weather we experienced earlier this spring-lots of rain and cool temperatures.

According to the Urban Coyote Research program, an awesome endeavor that began in 2000, mange was first detected in coyotes the Chicago region in 2002. I remember back when it ripped through the local fox population before that, in the late 1980s or early ’90s, if memory serves. It took them years to repopulate.

By contrast, the local coyote population has remained relatively stable. What mange tends to do is change the behavior of the affected animal. Instead of being active at dawn and dusk, as well as overnight, mange-stricken coyotes are often observed in the daytime.

While this might sound like a setup for human-coyote conflicts, such situations haven’t created an increased risk for people or pets. What it does do, however, is raise the visibility of the infected individual, which then triggers fear in people unaccustomed to coyote behavior patterns.

Mange-ridden animals may seek shelter under raised decks or sheds, and they may attempt to forage for “easy” food like dishes of cat or dog kibble left out for outdoor pets. What they don’t do, as far as the research indicates, is try to take down a small pet. In the 17 years of the Urban Coyote Research project, no pets have been attacked by mange-infected ‘yotes.

What has been recorded, and make for fascinating reading, is the story of Coyote 571. She lived only a little more than three years, but survived two winters with varying stages of mange mite infestation. You can learn more about her short but intriguing life at urbancoyoteresearch.com/coyote-story/coyote-571.

What should you do if you encounter a coyote infected with mange? In extreme cases, where the animal is devoid of fur and clearly suffering, the most humane action is to contact a wildlife removal expert. Don’t attempt to feed the individual or try to touch it-although rare, human cases of sarcoptic mange, known commonly as scabies-have occurred when people have come into direct contact with the mites.

If the animal still has most of its coat left, the best thing to do is let it fight the infection off itself. Healthy coyotes have the stamina to survive an infestation. Again, though it may be tempting, don’t attempt to feed an infected individual. Doing so will only create conflicts in the future, when the animal goes about defending its gravy train.

At this point, are you feeling itchy? Sorry. So let’s change the topic… Next week we’ll revisit the subject of a recent Good Natured column, the matter of bobcats in the TriCities. In the meantime, try not to scratch too much.