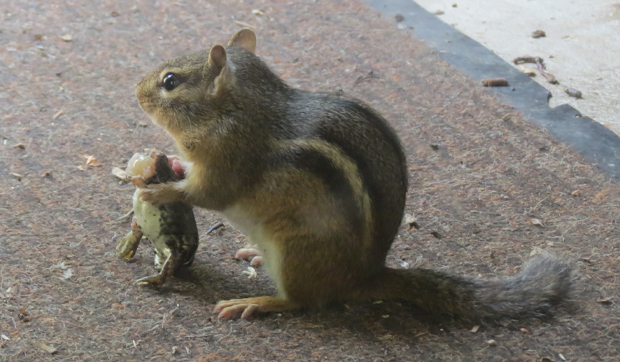 Often regarded as herbivores with a penchant for birdseed, chipmunks occasionally add animal protein to their diet. Here an eastern chipmunk, Tamias striatus, feeds on a green frog, Lithobates clamitans.

Secret identities. Our popular culture is full of them.

Then there are chipmunks.

That’s right, the chippy. That oh-so-common eater of birdseed, grass seed and other bits of vegetable matter, has a secret identity I’ll bet many of you will find positively shocking.

A carnivore. An eater of meat.

I suppose this trait, to be most correct, would make chipmunks omnivores. That is, eaters of both plant and animal material.

But still, the sight of a cute-as-a-button Chip, or Dale, with flesh hanging from its jaws, blood dripping from its teeth, gives even the most seasoned naturalists reason to take a second look.

My friend Peggy Doty, who leads the team at Russell Woods Environmental Center in Genoa, IL, once had occasion to witness such an astounding event. Then, blessed with a nice viewing angle (through her office window) and the luxury of time (the chipmunk had no idea it was being watched) she recorded the occurrence for posterity.

Afterward she started doing some investigating, as her observations upturned most of what you’ll read about mammalian herbivores in field guides and other literature.

It turns out chipmunks, and in fact most rodents, will supplement their plant-based diets with meaty proteins if and when the opportunity presents itself. It could be that a nest was left unguarded, and tiny, helpless hatchlings are suddenly free for the picking. Likewise for newborn mammals, should their parents leave them unattended.

Or maybe an adult animal has recently met its demise.  A bird crashes into a window. A squirrel gets hit by a car.

In still other cases, chipmunks, as well as many of their rodent cousins, will actually kill prey–anything from juicy insects to adult birds, reptiles, amphibians and, sometimes, each other. (Can’t you just imagine Dateline or 20/20 getting hold of this information? “Three mischievous chipmunks once topped the charts with their cartoon antics and musical stylings. Tonight we explore what REALLY happened to Alvin, Simon and Theodore…”)

In chatting with Peggy, whose impressive resume includes a degree in wildlife biology, I learned that the frog she observed being consumed most likely met with calamity before the chipmunk arrived on the scene. “Though it was very fresh, I believe he found it (already dead),” she said. “There was not a mark on the torso of the frog. My thought was that it would have been fighting back if grabbed by a leg or something.

“Unless… he was a ninja chippy and snuck up from behind and snapped the frog’s neck. Wait, what neck? Ha!”

Besides being an ace naturalist, my dear friend is also very funny.

The series of photos Peggy sent includes shots of the chipmunk peeling the frog, stuffing the legs in his cheek pouches, and taking nibbles of other assorted body parts before ultimately leaving the limbless carcass on her door mat.

Then, just like that, he was gone. Perhaps he scampered off to digest his meaty meal in comfort and privacy. Or maybe he went over to Peggy’s birdfeeders for a few seeds, or to the birdbath for an after-dinner drink.

We’ll never know whether he went back to being a mild-mannered herbivore, or if, fortified by the intake of animal protein, he headed off in search of bigger and/or better prey. Wherever he ended up will just have to remain–like his penchant for meat-a well-kept secret.