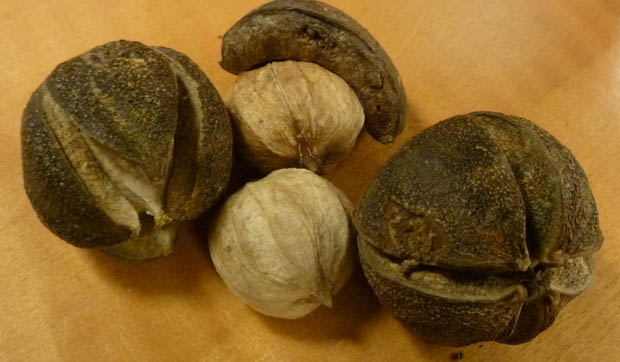 Talk about a tough nut to crack! Lacking sharp rodent incisors, humans usually need to resort to hammers or other such tools to open and enjoy the sweet taste of the shagbark hickory nut.

I’ll admit it. I’m a cookie-dough freak. Even though I know full well that baked cookies taste really good, I just can’t resist digging into the bowl with a spare spoon and letting a gooey glob, gritty with sugar, slide down my gullet. If the dough happens to contain chocolate chips, look out; the oven’s optional when those babies are around.

Squirrels, I suspect, are the same way. Only instead of cookie dough, their downfall is nuts.

Walk in the woods these days and it’s easy to find evidence of the furry critters’ foraging-especially underneath shagbark hickory trees. Shagbark hickory nuts, it seems, are the chocolate chip cookie dough of our local woods.

It appears that 2017 is a big year for hickory nuts, and already it’s difficult to find one that’s not been nibbled. The thing is, the nuts aren’t quite “done” yet. They still need a few more weeks on the tree.

Over time the bitter green husk, which tastes a little like a really bitter green apple, tinged with hot peppers, will darken, harden and split. Inside lies the shell that protects the nut’s ultimate prize: a protein-rich, fat-laden nutmeat.

I’m not much of a connoisseur (clearly! I eat raw dough and sample green nuts, for heaven’s sake) and I can’t speak for squirrels’ taste buds, but to me a hickory nut is among the finest flavors our woods have to offer. It’s reminiscent of pecan, which makes sense as both trees belong to the genus Carya.

But the hickory nut seems more buttery-probably because of its high fat content. According to one source, 1 oz. of hickory nuts contains 186 calories, 152 of which come from fat. If my math is right, that translates to a fat content of more than 80%. It’s cholesterol free, but still…

With our pampered suburban lifestyles, we tend to recoil at such a high number (raw chocolate-chip cookie dough, with nuts, has 46% fat). But for squirrels, and other woodland creatures that have to work hard for every calorie they consume, finding a nut-laden shagbark hickory is like hitting all five lottery numbers, plus the Powerball. It’s literally fat city; a few thousand of these babies, stashed away in tree cavities, crevices and underground, means survival will be a lot simpler this winter.

But wait, there’s a catch. When it comes to survival, there’s always a catch.

If every delicious, nutritious shagbark hickory nut was eaten, there’d be no baby hickories sprouting next spring. And really, flavor and nutrients aside, the next generation is really all a mature hickory tree is about.

And so the nut comes packaged in one of the toughest shells around. You’ve heard of the phrase, “a tough nut to crack?” I have a feeling whoever coined the term may have been referring to hickory nuts.

Humans usually have to resort to hammers to open a hickory nut. Squirrels and other rodents have it a little easier, provided their incisors are in good shape, but they still need to invest considerable effort into opening each shell. It’s a given that some nuts will go uneaten, thus ensuring at least a few new hickories coming up next year.

As summer transitions into fall, I’ll probably snack on a hickory nut or two, unless the squirrels beat me to them. If that’s the case, though, I suppose won’t be too upset. There’s always cookie dough.