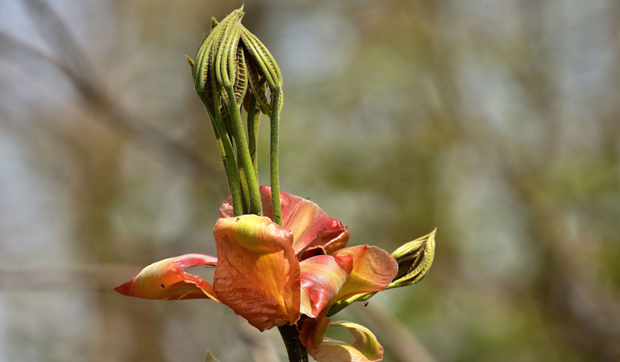 Curly and colorful, the opening leaf buds of the shagbark hickory sometimes are mistaken for exotic flowers in bloom.

It’s a question we get asked fairly often: Where are the hickories at Hickory Knolls?

It’s true, shagbark hickories and their close relatives the bitternuts are in the minority when compared with the numbers of white oaks, bur oaks and assorted other tree species that can be seen from the nature center. Over the past 10 years we’ve planted a couple of shagbarks near the building to, in essence, live up to our name, and we do have a good-sized bitternut over by the garage. And there’s a pretty decent stand of shagbarks halfway through our natural area, roughly half a mile down the trail.

But to be perfectly honest, the shaggy yet stalwart species also known as Carya ovata wasn’t everyone’s first choice as the name for our unique center.

We knew we wanted to use a component of our natural area in the name, ideally a lifeform both loved, and long lived. We wanted an oak.

Ah, but the problem with naming something ______ Oaks is that pretty much every appropriate word that could precede these treasured trees is already in use. The Oaks is a development just south of downtown St. Charles. Majestic Oaks? It’s a subdivision on the east side of town. Century Oaks? It’s a neighborhood in Elgin.

Toss in some homophones like LeRoy Oakes (the forest preserve named after a Kane County board supervisor) and adjectival uses like Oaken Acres (a wildlife rescue in Sycamore) and we eventually concluded that we’d have to pass on using this iconic tree as part of our identity.

Once that decision was made, a host of other local flora came under consideration. Twinleaf, after the rare woodland wildflower Jeffersonia diphylla, had some merit for the way it embodied our dual mission of education and entertainment. Terra was considered too, as it evoked images of the land we actively engage in preserving. (It also got us wondering if Margaret Mitchell played a little joke on her Gone With the Wind readers by naming the O’Hara plantation Tara, and whether we could use the quote “…land is the only thing in the world worth workin’ for, because it’s the only thing that lasts” as our motto.)

These names, however, were considered too obscure and indistinct for our new venture. We needed something that was both stately and strong, and readily recognizable…and so we settled on Hickory.

(As for Knolls, well… Our natural area is a wonderful example of glacial topography. Yet none of the glacial formations there had names that see everyday use. Hickory Kame? Hickory Moraine? Hickory Pothole Wetlands? No, nope and no way, in that order. And since Hickory Hills was already a suburb, Hickory Knolls we became.)

Several times over the years I’ve written about the shagbark hickory and its many fine qualities. It’s one-half of the oft-cited oak-hickory forest, the dominant deciduous forest type in eastern North America. Its fruit is a buttery-flavored nut that’s high in fat, which is good news for foraging herbivores and omnivores. Its bark that’s o-so-shaggy provides all sorts of shelter and hidey-spaces for arthropods like insects and spiders as well as the occasional bat.

Looking at the tree from a purely human perspective, its wood is tough yet flexible and makes great tool handles. And wagon wheels, if you’re old school. It puts out lots of heat when burned and its smoke flavors bacon, hams and more.

But to me, purely human that I am, the hickory’s finest attribute is one that’s just starting to appear in our woods: the unfurling of this year’s leaves.

I know it doesn’t sound spectacular but when you see the opening buds in person, you’ll change your mind in an instant. In fact you might even mistake them for some sort of exotic blooms-especially if you see them up close. (True story: One of the photos under consideration for this column was perfect in every way, except it was vertical and we needed a horizontal format. Oh, and it was mislabeled “Azalea.”)

The shagbark’s pinkish or reddish bud scales curl back in a fashion reminiscent of a Turk’s cap lily. At the center stand the yet-to-expand compound leaves of the tree, exhibiting hues from red and orange to yellow and green. Zowee!

If you’d like to see the opening buds of Hickory Knolls’ namesake trees, you’d better hurry. Their presence is fleeting, and their next appearance won’t be for another year. But if you get here and they’re gone, no worries. The other half of our name is pretty cool too-and they’ve been here since the last Ice Age!