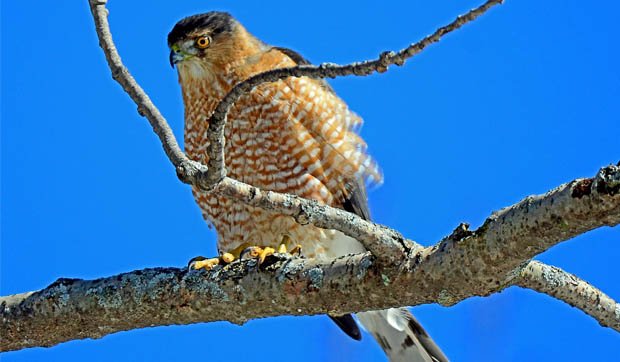 Photo Caption: Labeled “sharp-shinned hawk” on a stock photography website, this photo actually may depict a male Cooper’s hawk. An informal Facebook poll yielded 12 votes for Cooper’s and 1 for sharp-shinned. But an expert from the Field Museum says the angle makes it hard to be 100% sure. What do you think?

Last week’s column ended with a promise that, this week, we’d take a look at the life and times of Accipiter striatus, the sharp-shinned hawk. And we will.

But I first wanted to point out that you could already know quite a bit about this bird and not even realize it. For it often suffers from a case of mistaken identity.

Just about everyone who feeds birds, or who has observed birds feeding for any length of time, has probably witnessed what happens when a hawk shows up. Songbirds disappear, squirrels and other small mammals vanish and the whole area takes on an eerie silence.

Usually, the catalyst for such behavior is either a red-tailed hawk or a Cooper’s hawk. The former is husky-what I refer to as the cargo plane of local hawkdom-and with maturity sports a brick-red tail. The latter is more of a fighter jet in both shape and actions (it often grabs birds, its preferred prey, in midflight) and, as an adult has a bluish gray  back and reddish orange bars across the breast.

But occasionally a third species comes in and causes havoc among the prey. That’s right, it’s the sharp-shinned hawk.

Although characterized as being smaller than a Cooper’s hawk-actually, the smallest hawk in North America- the sharpie is in many ways almost identical to its cousin. Both species belong to the genus Accipiter (Cooper’s full name is A. cooperii, honor of 19th Century naturalist William Cooper-whose specialty, interestingly enough, was seashells.) Adults of both species have similar coloration and habits. And their ranges overlap considerably.

But they do differ in some details. And that, my friends, is where the devil lies.

Even though sharpies are smaller than Cooper’s, size can be difficult to gauge when there’s no means of comparison. Cooper’s hawks are said to be the size of a crow-up to 20 in. in length-while sharpies are more like doves, topping out at 14 in. long.

But as is typical of birds of prey, there is a great difference in size between the sexes. Females are larger than males. The difference in dimensions between a male Cooper’s hawk and a female sharp-shinned can be negligible.

So we have to look at other particulars.

The trick here is that the tail tip of a soaring sharpie can appear rounded. And when the birds are perched, the tail feathers are tucked in, making them visible only from the front.

Birders will also point out that sharpies have a narrow white band at the end of the tail, while the white at the end of a Cooper’s tail is a bit wider. But…feather wear and individual variation can make this ID characteristic difficult to apply too.

Let’s take a look at the head. The Cooper’s head appears large in relation to body size, while the sharp-shinned head appears rounded and small. But what happens when the wind is blowing or the sharpie is on alert and raises its hackles?

Legs (Cooper’s are broader, sharpies’ are thin, with a keel, hence the name sharp-shin); flight pattern (both flap, flap, soar but sharpie wingbeats are faster than Cooper’s); and juvenile plumage streaking pattern (yes, younger birds have different coloration and yellow eyes) are other characteristics to consider. But these too can be tough to discern.

See the pattern in these “helpful” tips? Starting to give yourself fits? Don’t worry, you’re not alone. The sharp-shinned vs. Cooper’s conundrum is famously puzzling, sometimes even for the pros. The best solution is to find a birding buddy and practice, practice, practice.

Regardless of species, you’ll get to see some beautiful birds. And there’s nothing wrong with that!