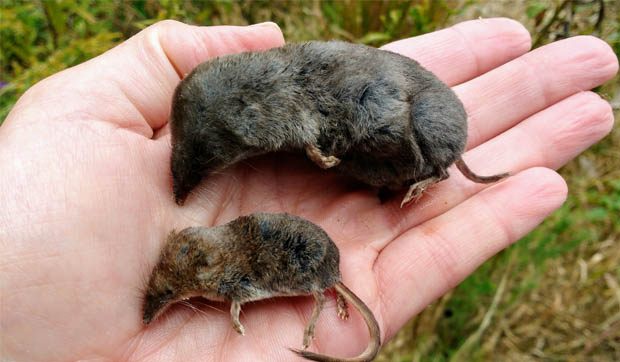 Blessed, or cursed, with a high metabolism, shrews live fast and die young. Some species consume and metabolize their weight in food every 24 hours. Shown here are two recently expired specimens, a northern short-tailed shrew (top) and a masked shrew (bottom).

Think your lawn or garden doesn’t have a resident population of insectivores? Have we got shrews for you!

Shrews aren’t the sort of wildlife that would normally grab your attention. Though fierce predators, they don’t eat pets like our area’s famous, or infamous, coyotes do. They’re not exotic or endangered. And, let’s face it – slate gray or brown in color and an ounce or less in weight, shrews are the sort of animal you literally could walk right over and not even notice.

But shrews are noteworthy nonetheless. For one thing, although they resemble mice, they’re most certainly not rodents. They, along with their cousins the moles, are insectivores, animals that specialize in eating chewy, ewwy bugs-many of which can be pesty in nature.

Shrews’ teeny teeth provide excellent clues to their predatory nature. Peg-like and pointy, they’re also tipped in red–almost as if they’ve been dipped in blood. The coloration, gory though it may seem, actually is due to iron deposits that are thought to make the teeth more durable.

Tough teeth are essential, for shrews have amazingly high metabolic rates and need to consume at least their own body weight in food each day just to survive. To chowhounds like me, the shrew’s lot in life sounds like a dream come true… until you consider the price of such extravagance.

That high metabolic rate is accompanied by a similarly high heart rate, which means that shrews startle easily. It’s been said that a clap of thunder can send them into cardiac arrest. Also, with calories burning up almost as quickly as they are consumed, shrews can only sleep for short intervals or they risk starving to death.

Adding to their notoriety, one species of shrew we have right here in the TriCities belongs to a rare but elite group: the venomous mammals. The northern short-tailed shrew, very common in our woods and grasslands, produces a paralytic toxin in its saliva glands. It is delivered through a groove between the lower incisors and comes in quite handy when the shrew subdues its prey.

It’s also coming in handy in medical laboratories, where researchers are examining the toxin’s wrinkle-smoothing, painkilling and cancer-fighting abilities. Although it’s a ways off from its own brand name, or even an infomercial, the compound-named soricidin, for Soricidae, the shrew family-has shown great promise in a number of lab trials.

These are big discoveries. Yet shrews are small. The northern short-tailed shrew, Blarina brevicauda, is our largest local species, yet it measures only about 4 in. in length and weighs up to an ounce-about as much as a stack of five quarters.

But by shrew standards, Blarina brevicauda is indeed a giant-sized killer. Its relative bulk and venomous bite allow it to take a variety of prey, ranging from insects and earthworms to small voles, mice and even other shrews.

Shrews through the ages have acquired a somewhat less than desirable reputation (thank you, William Shakespeare) but in truth these little critters perform a valuable service by helping keep insect and rodent populations in check. Even better, they’re abundant throughout much of our area.

I happened upon a northern short-tailed shrew just the other day. It scurried in front of me as I walked along a trail in the Hickory Knolls Natural Area. Although it made a beeline as it shot across the path, its route took on more of a zigzag pattern once it got back under the cover of the grass and leaves.

I watched it for another few seconds before it disappeared completely in the leaf litter. Curious about how it navigates, given its nearly nonexistent eyes, I did a little reading when I got back to the office. Guess what? Like those other famous insectivores, bats, short-tailed shrews use echolocation to find their way around and hunt prey.

Reading further, I also figured out why, over the years, I’ve found way more dead shrews lying on trails than I have dead voles, even though most open spaces have more voles than shrews at any given time.

Voles, a.k.a. nature’s baked potatoes, are loaded with goodness, at least from a predator’s perspective. They’re high in nutrients and low in defensive behaviors. Shrews, it turns out, are quite the opposite. In addition to sharp teeth and venom, they have musk glands that release a foul odor (and, I’d imagine, taste) when the animal is disturbed. A mammalian predator may pounce on a shrew and kill it, but few if any will then dare eat it.