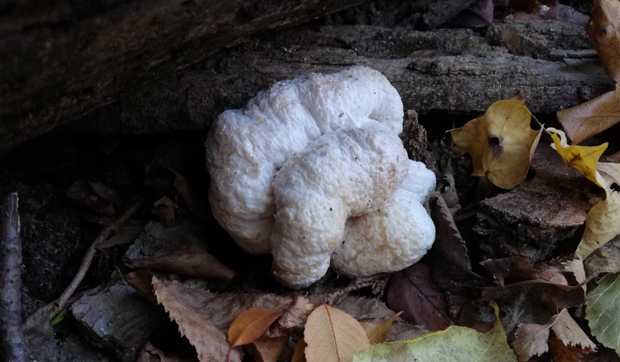 Puffy, blobby and white, the mushroom known as shrimp of the woods is valued by some foragers of wild edibles for its texture and flavor. But the fungus has another name, the aborted Entoloma, and another side to its fascinating story.

Good Natured: Shrimp of the Woods

In the classic movie Forrest Gump, Forrest’s buddy Benjamin Buford Blue-Bubba for short-had a dream of owning a shrimp boat. In one memorable scene, he detailed all the delectable reasons why the business would be a sure-fire success:

I don’t know about you, but my mouth watered the first time I heard that list, and every time since. Shrimp kabobs? You betcha. Deep fried? For sure. Coconut shrimp? Oh yeah!

But you know what? Bubba, may he rest in peace, left out one very important kind of shrimp. It’s one that you don’t need a boat to harvest, for it doesn’t live in the ocean. In fact it doesn’t live in water at all-although it does appreciate moisture. We talking about good ol’ Entoloma abortivum-that fascinating fungus also known as shrimp of the woods.

A few weeks ago when we took a Good Natured look at the mushroom known as chicken of the woods, and made mention of another species called hen of the woods, we emphasized how both fungi tasted like, yes, chicken. They really do! But if you’ve ever tried squirrel or snapping turtle or rattlesnake after being told it “tastes like chicken,” you know that term has many interpretations.

And so it is with shrimp of the woods. Even though you can use it to make most of the dishes in Bubba Blue’s list, many of the recipes note that while the texture is remarkably shrimp like, the flavor will depend on how it’s prepared. (Full disclosure: I haven’t tried this particular mushroom yet. But I have a feeling there’s a gumbo in my future. If and when that happens, I’ll let you know

Whether it tastes like shrimp, or chicken, or even if it tastes like mushrooms, shrimp of the woods has another even more remarkable quality-one that’s spelled out in its scientific name. Abortivum lets us know that the story of this fungus isn’t all fun and games…especially where honey mushrooms are concerned.

Another delightfully edible group of fungi in the genus Armillaria, honey mushrooms are prized by some for their sweet flavor; they’ve also been found to be rich in carbohydrates, proteins, fat and ash. It’s these latter qualities, I’d imagine, that account for the interesting relationship between honey mushrooms and shrimp of the woods.

Before we go any further, I should explain that the photo accompanying this article that shows E. abortivum as white and puffy is one of two forms it can take. The other form is an agaric, which means it’s more, more, shall we say, mushroom-y in appearance: creamy tan to brown, with a stem and a cap that has gills which turn pink at maturity.

But this “typical” appearance belies another side to this woodland shrimp. That lumpy, puffy form for years was thought to have encountered some difficulty during its development and as such was aborted-hence the species name abortivum.

In the late 1800s though, Charles Horton Peck, a botanist with impressive mycology credentials, found Armillaria fruiting bodies that were “aborted” in the same fashion as Entoloma abortivum. In the ensuing years, other mycologists noted that similarity as well. But in a field where so many fungi are so very similar, apparently no one (well, no one whose work was published) dug any deeper into the phenomenon…until the 1970s.

In 1974 Scottish mycologist Roy Watling discovered Armilliaria mellea tissue within an Entoloma abortivum in its blobby or “aborted” form. Aha! At last we had an explanation for these similar yet separate species. Watling concluded that A. mellea, which is known to be pathogenic and parasitic on a variety of trees, parasitized E. abortivum, thus accounting for the strong resemblance between the puffy lumps.

But time, and technology, march on. In 2001, the paper with the $10 title “Field observations and inoculation experiments to determine the nature of the carpophoroids associated with Entoloma abortivum and Armillaria” by Thomas L. Lindner Czederpiltz, Thomas J. Volk and Harold H. Burdsall Jr. found the opposite to be true-that E. arborvitum actually was the one permeating A. mellea. In fact they are advocates for the named abortive Entoloma, to more accurately portray what’s happened.

So there we have it. On the forest floor, it seems, shrimp trumps honey. I think our other Forrest-and Bubba too-would be okay with that. Don’t you?