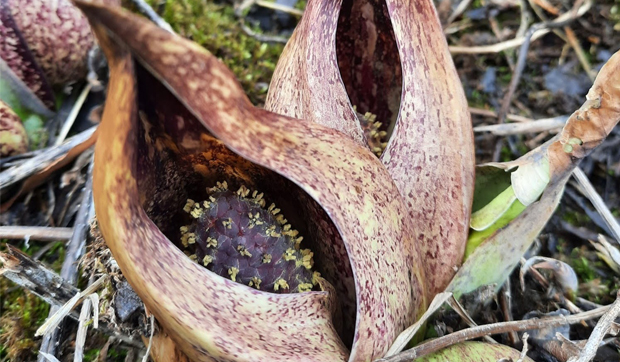 Skunk cabbage in bloom. Later in spring the plant will unfurl its large leaves that, yes, are just as stinky as its flowers. Meanwhile the spathe will fade away and over summer its spadix will form a compound fruit of several compartments, each containing a pea-sized seed-the next generation ready to take root.

My Grandma Atterberry loved her roses. Sometime around 1960 Grandpa plowed up a large section of lawn and for years Grandma tended upwards of 30 bushes, all with stunning blooms. I think for her a rose garden was the perfect antithesis to her life as a farm wife during the Depression years; the WWII years when Grandpa worked in a munitions factory; and the Korean War years when her only son, Uncle Lyman, served as an Army sergeant.

I can’t remember the names of all the varieties she grew. To be honest, I was more interested in playing with the chickens and building forts in the grape arbor-a less thorny and more kid-friendly area of that rural backyard. But I what I do remember though is the heavenly scents that would fill the house when Grandma brought in a bowl of roses. And she brought in lots!

Roses in the breakfast nook, roses in the breezeway, roses on the dining room table. Then, even though fragrance permeated nearly every corner of every room, Grandma would bury her nose in a bloom and inhale deeply. “Pumpkin,” she’d say, “Always take time to smell the roses.”

So it is that I can’t help but wonder what Grandma would think of her little Pumpkin, today nearly as old as she was back then, crawling about a wetland, taking a little time from a busy day to smell the… skunk cabbage.

For the past few weeks, Symplocarpus foetidus, our area’s earliest-blooming wildflower, has been emerging from its winter slumber in select local wetlands-primarily those known as fens, which are fed by groundwater.

It’s a plant that, as Grandma would say, likes to keep its feet wet. It’s also a plant that likes to keep its admirers on their toes. Folks hungry for the first signs of spring start looking for it when there’s still snow on the ground; sometimes it delivers and sometimes not. Over the years we’ve recorded skunk cabbage blooming as early as February 12 and as late as March 15.

When it does appear, it doesn’t announce itself with riots of color and fragrant blossoms. Quite the opposite, actually. Skunk cabbage flowers actually are hidden inside a leathery hood called a spathe. It’s that mottled-maroon structure which pushes up through the soil first. Once it’s securely above ground, the spadix, a fleshy club of tissue inside, begins to bear tiny yellowish flowers-none of which have petals.

The female flower parts-the pistils-bloom first, followed by the pollen-producing male parts, or stamens. This sequence fulfills two roles. It deters the plant from self-pollinating, and it gives the pistils a chance to receive pollen from earlier-blooming and more vigorous neighbors, thus strengthening the species.

Such order is impressive, but many folks feel skunk cabbage’s real claim to fame lies in its ability to create heat. Through a process called thermogenesis, the plant takes starch that has been stored inside its underground stem and quickly metabolizes it. The resulting temperature of the flower can exceed 70F-which is nothing to sniff at when it’s still cold out.

This cozy microclimate, like the flowering sequence, is multifunctional. It helps the flowers to grow, even when ambient temperatures are at freezing or below, and it attracts the pollinators that, at this early point in the year can be hard to come by.

As an added attractant for those hardy and hard-working insects-namely flesh flies, carrion flies and assorted gnats-that stop by for a brief warmup, skunk cabbage emits an aroma at which Grandma would surely turn up her nose: that of rotting meat.  A little warmth, a little stink, what could be better?

(Lest you think flies are the only creatures attracted by the warmth… Honeybees looking for early sources of pollen sometimes gravitate toward skunk cabbage. Spiders, too, can be found crawling inside the plant’s sheltering structure-but for a completely different reason. Drawn by the balmy ambience, they often stay for a meal or three. To paraphrase the old poem, “Come into my spathe and spadix, said the spider to the fly.”)

We are on the cusp of spring. It won’t be long before our other, more traditional wildflowers like hepatica and bloodroot will sprout their bright blooms; spring beauty, false rue anemone and many others will soon follow. It might be a little early for Grandma’s roses, but it’s the perfect time to head out and smell the skunk cabbage.