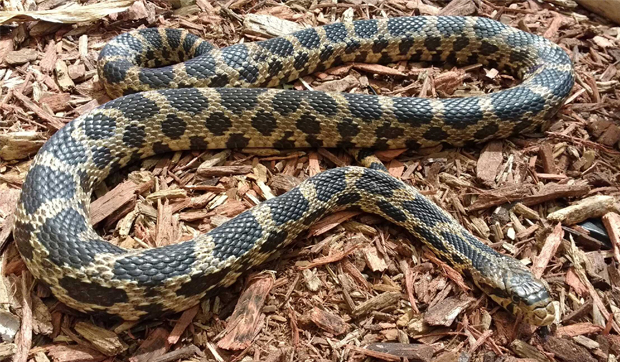 Blotchy and big-adults average over 4 ft. in length-nonvenomous fox snakes are our area’s longest native constrictors. This time of year, they are heading for hibernacula, areas that might include garages, crawlspaces and basements.

We all have our dreams…a fancy house, a fast car, maybe fame or fortune. Mine, go figure, have to do with snakes.

One of my earliest dreams dates back to the year I turned three. We were living in one of my grandmother’s houses, waiting for our new house to be built. Grandma’s house was quite old, in fact she was born there, and it had all features three-year-olds find endlessly fascinating: narrow, steep stairs leading to a small, dark cellar; equally narrow and steep stairs leading to a tiny attic playroom; and, outside, a cistern, tantalizingly obscured by a round metal cover.

Of course Mom and Dad and even Grandma, who visited frequently, saw these things as most grownups would: hazards that are best avoided, especially by three-year-olds. And so they told me stories, most of which I’ve only recently figured out were made up.

For example, they said the cistern was full of snakes and should be avoided at all costs.

I remember spending a lot of time that summer hanging out by that hole in the ground. Whenever my older cousins or the boys next door would come over, I’d have them help me move the metal cover to reveal the pile of rocks below. There I’d crouch, chin in hands, staring into the deep crevices and hoping, praying, for any kind of movement.

Sad to say, those lackluster summer days in 1965 led to a pattern that repeats itself even now. Wherever I happen to be, it’s a sure bet that any snakes will be elsewhere.

As a naturalist with a passion for reptiles, it’s sometimes hard to be sympathetic to the concerns of these flustered folks, given that they are in essence living my dream. Usually, though, my training kicks in and I steer the conversation to focus on the facts.

Far from being cold-blooded killers, snakes actually perform several vital ecological functions. They help control rodent, bird and insect populations and in so doing also help keep down the numbers of fleas and ticks and other undesirables too numerous to mention. At the opposite end of the spectrum, snakes also serve as food for a number of other area predators including foxes, hawks and owls.

When snakes show up inside a house, they don’t behave like other common but unwelcome guests. They’re not there to destroy insulation and wiring, nor gnaw into boxes and bags. They don’t even need a place to go to the bathroom. They’re just looking for a quiet place to spend the winter.

Our local climate being what it is, snakes spend the cold-weather months in places called hibernacula. In the wild, these locations might include rodent burrows or the deep crannies on a rocky slope. But in suburbia, hibernacula might also include garages, crawlspaces and basements.

One snake species that has a particular penchant for human dwellings, and also causes quite a bit of consternation, is the eastern fox snake, Pantherophis vulpinus. Bedecked with dark brown splotches on a light brown background, this nonvenomous snake at first glance looks very much like a rattlesnake. To add to its charade this character, which can grow to be almost five feet in length, shakes its tail when agitated. In dried leaves or grass, or even against a piece of paper, that shaking tail can sound very much like clatter of a rattlesnake (which are amazing creatures in their own right, but also endangered in Illinois and very rarely seen in this part of the state).

In the past we’ve gotten calls from residents who have found fox snakes in their cellars and businesses who’ve found them in storage areas; we even heard from a local law enforcement agency. Used to handling bad guys, these latter folks were nonetheless thrown for a loop by the appearance of a splotchy, “rattling” snake in the front office.

If you have a fox snake come calling, er, crawling, first of all, consider yourself lucky. These nonvenomous snakes indicate that your yard and/or the surrounding area provides diverse habitat that likely is home to a nice variety of native plants and animals.

Second, if at all possible, try to leave the snake be. They pose no harm, don’t make any noise and, as I mentioned before, aren’t going to be causing any damage while they wait out the winter. In fact, as spring comes and they start to rouse, your guest just might help itself to a mousie or two before showing itself out.

I hold little hope of any snakes, fox or otherwise, finding refuge at either my home or office, both of which are smack-dab in the middle of St. Charles. But that doesn’t stop me from poking around the crawlspace and basement, probably more frequently than I should.

A girl can dream, can’t she?